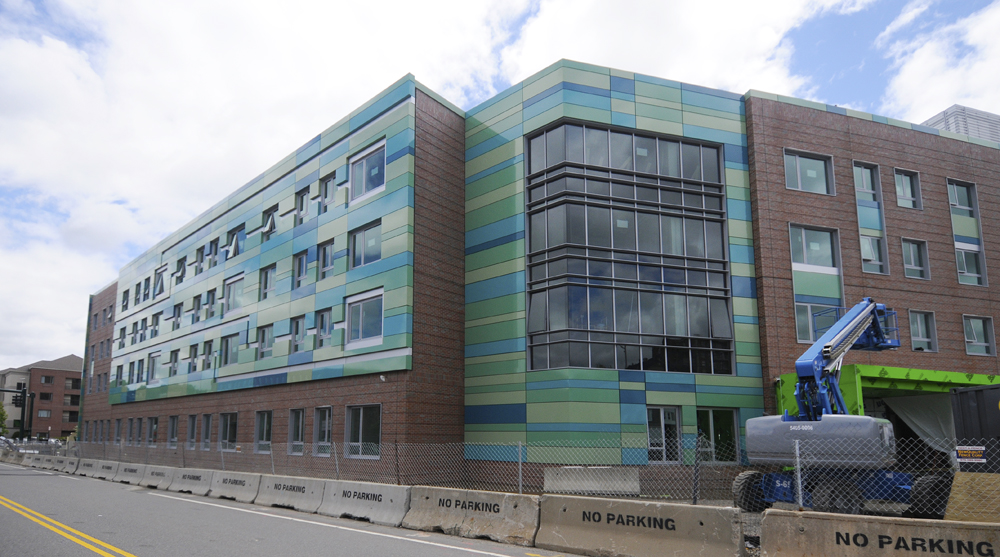 With workers swarming, construction materials piled inside and out, and the courtyard a muddy mess, you wouldn’t think WPI’s new residence hall on Faraday Street will be ready for occupancy in mid-August, as planned.

But despite appearances, the dorm will be completed on schedule, according to Fred DiMauro, assistant vice president for facilities.

The $38 million, 89,000-square-foot, four-story building sits between Grove and Lancaster streets, on the site of an old manufacturing building that was torn down years ago. It will house 258 students, in 62 four-person apartments, and 10 studios for singles. Eight of the bigger units are handicapped accessible.

The apartments have kitchens, and each floor features bright sitting areas at the ends of halls and two tech suites with audio-visual equipment, conference tables, and chairs so students can work on projects. 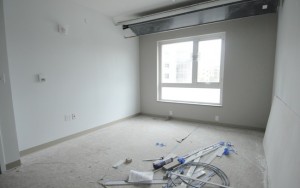 Parking for 130 cars will be available in an adjacent lot leased from National Grid.

The courtyard, the biggest of any single dorm on campus, will be completely fenced and will have a card-access gate. It will have a patio with sunshade and a hexagon-shaped accent light pit.

“It’s a great respite,” DiMauro said of the green space. “When you come back here, you have your own little island.” 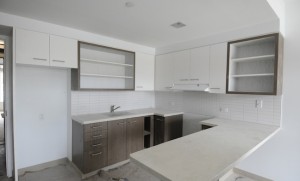 Balcom said residents were determined by lottery (though this year there will be no freshmen) and they chose their apartments after looking at floor plans. Since early arrival students may return for fall semester a week before the project is ready, they will be housed in the Courtyard Marriott across the street for that short time. The Starbucks in the hotel, she added, plans to offer discounts to WPI students.

Balcom acknowledged that some students were concerned about the dorm’s distance from the main campus. However, she noted that it’s closer than many off-campus apartments, such as some on Highland Street. Plus, the Gateway Park shuttle will be available for those who want a lift, and classes at nearby Gateway will be an incentive for some students to live on Faraday Street. 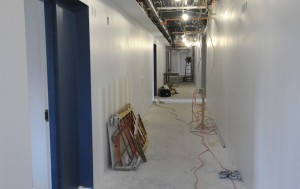 For a safe, easy walk to campus, a lit, paved path will be built through Institute Park, with an entrance off Humboldt Street. That project should be completed by August, as well, according to DiMauro.

Faraday Street and the dorm are named after British scientist Michael Faraday, who discovered benzene, an early form of the Bunsen burner and advanced the study of electromagnetism and electrochemistry.
While the dorm is built of the red brick required by the city to fit in with the industrial heritage of the area, it features modern green and blue-green metal panels to set it apart. On one side of the building, the panels are arranged to resemble a circuit board, a nod by the architect to Faraday’s work, according to DiMauro. 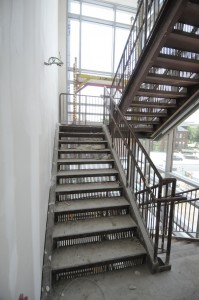 Like any new building at WPI, the dorm is being built to national LEED (Leadership in Energy and Engineering Design) specifications to make the most use of natural light and to conserve energy and water.

What distinguishes this dorm, to DiMauro, is that it is built on a once-polluted industrial site cleaned up as part of the brownfield project for Gateway Park, with the cooperation of WPI, the city, state and federal governments, and the Worcester Business Development Corp.

“This is what you can do with an area nobody ever thought would amount to anything,” DiMauro said. “This is a testament to brownfields.”