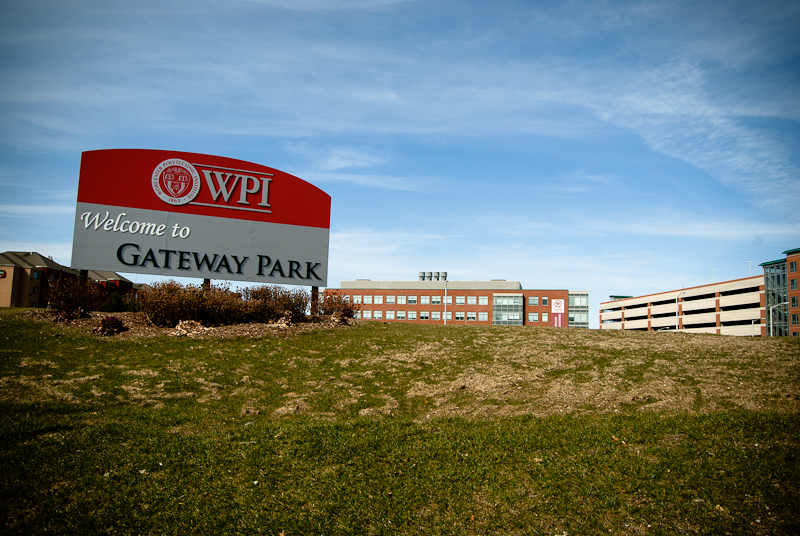 In a week or so, the fences should be gone, and students and others will be able to take a paved, lighted walkway from the pillared plaza on Salisbury Street to a new plaza on Humboldt Avenue, across the street from SAE.

The City of Worcester is completing the $388,000 project as part of its master plan to improve walkways in the park, according to Rob Antonelli, assistant parks commissioner. Funding comes from money WPI pays to the city in lieu of taxes.

Fred DiMauro sees the walkway as an important connection to the fraternity house, the new residence hall on Faraday Street, and all the development at Gateway.

“This path literally brings Gateway closer to the campus,” says DiMauro, the assistant vice president for facilities at WPI. For students, faculty, and staff, “This is an essential link,” he says.

The lighting will improve safety, as will so-called blue light emergency phones at either end, for which WPI will pay another $15,000. The blue light phone at Salisbury and Boynton streets has been installed; the other light is planned for fraternity property on Humboldt Avenue. The old gazebo along the path, seen as a potential hiding spot, has been removed as an additional safety precaution.

WPI is also petitioning the city for a crossing signal at the busy intersection of Salisbury and Boynton, according to DiMauro.

He calls Faraday Hall, which houses 260 students, the “tipping point” in the need for a more convenient, safer walking route to the main campus. “It made sense to pursue a path through the park,” he says.

The city hired Busy Bee Nursery as the general contractor, which is working off a design reviewed by WPI.

The path to and from the central part of the campus provides a shorter, straighter route than taking the streets, and DiMauro hopes the improvements will keep students from cutting through nearby private property, like the grounds of the Executive House apartments.

Before paving, the path was graded to make it accessible to the handicapped. The old dirt walkway path through the park was badly eroded and too steep to accommodate wheelchairs.

In 2009 WPI entered into a payment-in-lieu-of-taxes agreement with the city, amounting to $9 million over 25 years. Part of the university’s contribution has been dedicated to the restoration of Institute Park. One of the goals of the master plan for the park is to improve pedestrian access.