Students Reach Out to the Community, Experience Giving Back Firsthand

WPI athletic teams have been bringing the same drive they exhibit on game day into the community by ‘signing’ and ‘drafting’ some very special players who, in turn, are giving these college students real-life lessons on the importance of giving back.

“Our partnership with Team IMPACT through the years has been special,” says Dana Harmon, director of physical education, recreation, and athletics. “As much as we have helped these young people with the tough life situations they are facing, they have greatly inspired us with their indomitable will and spirit to make a difference in our lives as well.”

“The look on Keegan’s face, and the emotion of his mother when she spoke to the team and the media, was touching in so many ways and let all of us know that we had done something special for an amazing young man and his family,” says head football coach Chris Robertson. “It gives our players a way to give back to the youth in the community. It gives our players a greater appreciation of the things they have in this life. It has really been spiritual and positive for everyone.”

“As much as we have helped these young people with the tough life situations they are facing, they have greatly inspired us with their indomitable will and spirit to make a difference in our lives as well.” -Dana Harmon

The basketball team was the latest to work with Team IMPACT when it “signed” 12-year-old Fitzgerald––known as the “fist bump kid” after a video of him fist-bumping Bruins players as they left the ice went viral in 2014––as a player-coach last month. Fitzgerald was born with Down syndrome and later diagnosed with leukemia. “As coaches we all talk about mental and physical toughness to our athletes. Liam is the epitome of toughness,” says head basketball coach Chris Bartley.

Head baseball coach Mike Callahan said Vyas signed his “letter of intent” with the team last spring as a sixth grader. “The kids here at WPI are such special people,” Callahan says. “They’re very loving, very caring, very passionate about what they do.” 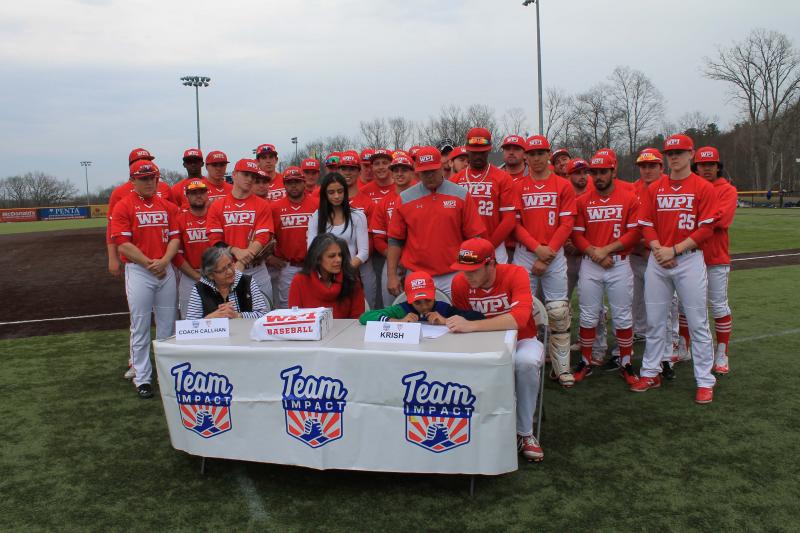 The fun that Concannon, Fitzgerald, and Vyas have had cheering on their teams helps lighten an otherwise tough situation––one of the goals of Team IMPACT. While strong bonds are formed, the seriousness of the medical issues these kids face means there can be struggles and difficulties along the way. In 2016 the softball team’s Team IMPACT “signee” Kaylen Gilman, 6, passed away.

“Kaylen was a young girl with a beautiful soul with so much life, passion, and love to give. She always had a smile on her face and our players loved having her and her family around our program,” says Whitney Goldstein, head softball coach. “In reality, the courage Kaylen showed us taught us life lessons and perspective more than any of us thought was possible. She is truly an angel.”

We are revisiting some of our favorite stories during Thanksgiving week.

The Daily Herd will resume normal publication on Monday, November 26.