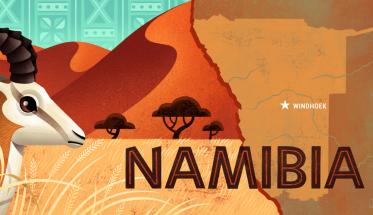 For the past 16 years, WPI Interdisciplinary Qualifying Project (IQP) students have been leaving their mark on Namibia, and the African nation has left an indelible imprint on them. The experience spurred some to join the Peace Corps after graduation. Another pursued a career in international development and now works in Africa. And many more have returned to the States transformed by the Namibian culture of positivity.

“Have we changed Namibia?” asks project center director Creighton Peet, Interdisciplinary & Global Studies Division (IGSD) teaching professor. “In small ways, yes, and hopefully in other ways too, such as Namibians’ ideas about who Americans are. But looking at the big picture, I think Namibia has changed our students more than our students have changed Namibia.”

“They have a huge sense of pride and hope in their country and
they believe they can make their country the place they
want it to be. You get that feeling from everyone you talk to.”

Chretien’s team of four traveled to the northern Namibian town of Oshakati to focus on the informal waste collecting industry. The students observed and interviewed the waste collectors—all women— who spend long hours at local dumps separating recyclables from the refuse. The women sell the glass, metal, and cardboard to processors, earning wages roughly 30 percent below the poverty level. Chretien was nervous that the women would view the students as meddling outsiders, and was surprised by their warmth and openness to new ideas.

“They have a huge sense of pride and hope in their country and they believe they can make their country the place they want it to be. You get that feeling from everyone you talk to,” Chretien says. “It was a unique feeling compared to the U.S. It was a more relaxed and generally optimistic feeling.”

Wodin-Schwartz agreed. “One of the things that struck me the most was the positive outlook the people have about the world around them,” she says. “Even when they were in tough situations, they carried themselves with an air of positivity.”

The IQP team found that the laborers could net higher prices for the recyclables by processing them on site. They researched various options, took into account the waste collector’s working style and preferences, and recommended installing a small-scale solar- powered plastics and aluminum shredding machine at local landfills. The team estimates the device will increase the waste collectors’ earnings by up to 330 percent per month.

The project was a 2017 President’s IQP Award winner and the team’s partner—Namibia University of Science and Technology—is drafting a proposal to fund the machine.

Other IQP teams in Namibia last spring calculated the use of car seats and child restraints among drivers in the capital city of Windhoek; created lessons on sustainable energy using smartboard technology; promoted the debut of MOOCs; looked at improving soft skills among employees of the nation’s railway; and developed a plan for small businesses to create and sell products using recyclable materials.

Those, and projects stretching back 16 years, have each contributed in some way to a country proud of its relatively new independence. The proof is not just in the recommendations implemented, but in the lives touched. These include one woman who named her newborn baby after a student whose team found an inexpensive way to insulate her community’s homes, and the many truckers in Namibia who now have places to rest up and refuel since an IQP team addressed the lack of truck stops in the country.“ Change happens slowly,” says Peet, “but if you could somehow quantify all the things our students have done and the lives they have impacted, it would add up to much more than we might imagine.”