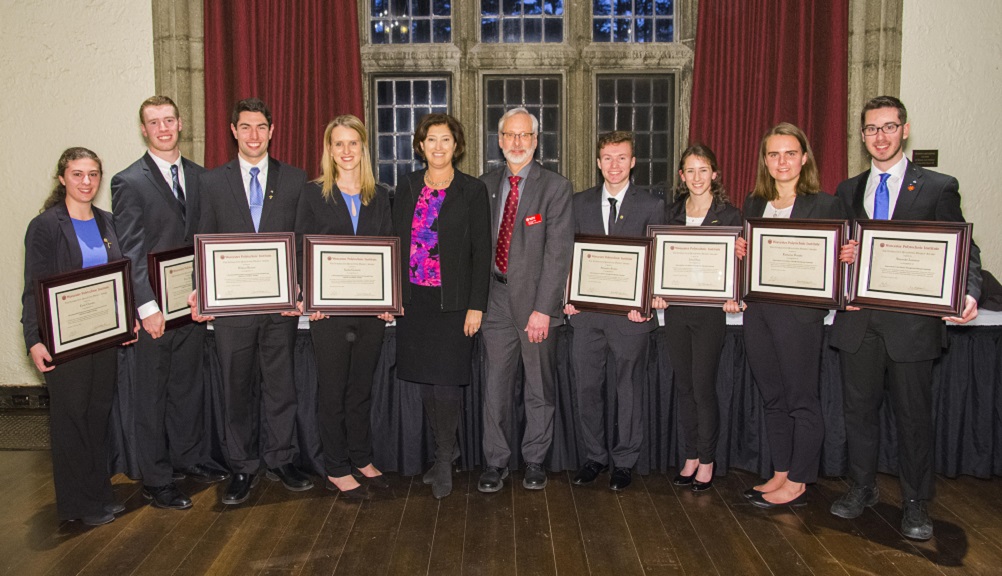 Armenia and Namibia projects earn top honors out of 50 submissions

Addressing problems related to eye care delivery, waste recycling, microplastic pollution, stormwater management, and peri-urban land-use conflicts—the five projects chosen as finalists for the 2017 President’s IQP Award perfectly captured the breadth and true interdisciplinary nature of the Interactive Qualifying Project, a cornerstone of a WPI education that gives students the opportunity to delve into real problems in communities around the world.

Awarded annually, the President’s IQP Award is given to student teams whose IQP work is determined to be outstanding in its focus on science, technology, and society. Hundreds of IQPs are completed each year, and 50 are submitted for consideration for the annual award, a number that is then whittled down to five by a group of faculty members—this year, Emily Douglas (SSPS), Louis Roberts (BBT), Purvi Shah (FBS), and Courtney Kurlanska (IGSD).

The Feb. 2 ceremony in Higgins House marked the 40th anniversary of the award, something President Laurie Leshin was proud to participate in, saying, “It’s a thrill to be able to continue the tradition of presidents who have come before me.”

In her opening remarks, Leshin shared with the crowd of proud parents, peers, advisors, and other members of the WPI community that one of her favorite things about the Interactive Qualifying Project is the fact that our students learn that sometimes the best solution for a community isn’t the coolest, or the most high-tech—it’s the one that effectively meets the needs of the community that is going to use the solution.

“Part of solving real-world problems is understanding real-world people and what their needs are,” she said. “If our students are able to go into communities around the world, learn from them, and work with them to develop solutions to real problems, that’s an amazing accomplishment, and really what we’re here today to celebrate.”

Joining the president in judging the projects were Joanna Jacobson, co-founder and managing partner of Strategic Grant Partners; Liz Hitchcock, entrepreneur, technologist, and arts and culture enthusiast who serves as a member on a variety of boards; Amy Jessen-Marshall, vice president of the Office of Integrative Liberal Learning and the Global Commons at the Association of American Colleges and Universities; and Jon Strauss, the 13th president of WPI.

Over the course of the afternoon, each student team had 20 minutes to give an overview of their project and what they accomplished, followed by questions from the panel of judges.

The student projects chosen as finalists are as follows:

At a reception held in Higgins House immediately following the presentations, students as well as their families, friends, and advisors gathered to celebrate all the students’ work and learn which group would be the recipient of the 2017 award.

“There’s something very special about going from reading the words on a page to really seeing it animated and explained in front of you, and you all did an extraordinary job,” Leshin said. She went on to praise each team for their resilience, work ethic, and engagement with sponsors.

This year’s winners weren’t one team, but two: the teams who completed their project work in Armenia and Namibia. The judges were impressed with the breadth of work the teams completed, their multidisciplinary solutions, and the way they connected their work to the sponsors’ broader missions.

While two teams took home the top prize, each student was honored with a framed certificate celebrating their accomplishments and all the work it took to get them to this point. During the reception, one student took a moment to find his own award among those of his peers.

“Oh, this is really nice,” he said, admiring the certificate as a family member snapped a photo. “That’s going in my room.”