WPI’s free bike share program got into gear last week with a formal launch of Gompei’s Gears. The bicycles are available to students, faculty, and staff who register at four campus locations. 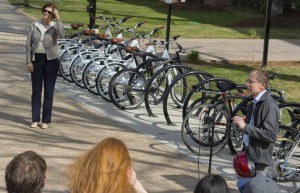 President Leshin and Professor John Orr offered a few comments while standing next to the fleet of white bikes.

President Leshin got things started by encouraging students to use the bike share as a way of getting to know the greater Worcester community. She thanked the organizers, saying it is satisfying to see a student project offer real benefits to the community.

“I’m excited to be a part of this,” she said, standing next to a line of the new bikes on the Quad. “Part of demonstrating projects is seeing projects like this come to life—elevating impact.”

Gompei’s Gears is the result of an IQP by current seniors Kevin Ackerman and John Colfer. Leshin also credited Rick Vaz and Kris Boudreau, as well as John Orr and Liz Tomaszewski and the Green Team for helping to see the project through.

Orr stepped to the microphone with a red bike helmet hanging from his belt. He cited funding from the Student Government Association and Graduate Student government in launching the program.

“This has really been a community effort,” he said, adding that the Green Team is working on a comprehensive transportation plan for the campus that includes carpooling and riding one’s own bike to campus. “Worcester has some challenging hills. Wear your helmet,” said Orr, placing his own helmet on his head.

Ackerman outlined how the bike share idea started as he fretted how he would get from Atwater Kent to his next class at Gateway Park. He had his own bike to use on campus, but pursued the idea through an IQP, hoping it could provide a sustainable transportation option around the WPI neighborhood.

“I didn’t want a project that would just end in a big fat report,” he said. “We asked questions and analyzed a lot of data.”

He said that he has met with representatives of the Worcester Regional Chamber of Commerce, and plans to meet with them again next month. “Maybe we have a chance to make a greater impact in the state,” he said.

The Green Team has 140 helmets to give away to those registering; it will take care of maintaining the bikes and making reservations. Green Team member Ryan Cooney ’18 says those who register are requested to watch a short safety video, and he encourages the use of helmets and hand signals, and for riders to warn pedestrians who might be unaware of their approach. The video describes hand signals and some general pointers on how to ride safely in traffic and adverse weather.

Tomaszewski said yesterday that there had already been 350 checkouts of the bikes.

Green Team member Ryan Cooney said some users have reported a problem with broken keys. He said they are investigating the problem, and are working on replacing broken keys as quickly as possible. He suggested the following tips:

The white bike share bicycles are equipped with a rear wire basket and bell. The bicycles feature a soft suspension seat, upright riding position, and Shimano 7-speed internal gear hubs with simple-to-operate twist shifter. The bicycle frame uses an integrated U-lock that can be used to lock the bike while shopping, attending class, or hanging out with friends.

Once registered, riders may use their smartphones to check out and return bikes at any time. A rider is allowed to use the bike for up to eight hours, and is required return the bike to its original bike rack as soon as the ride is complete.

Please consider making a donation at the crowdfunding page.