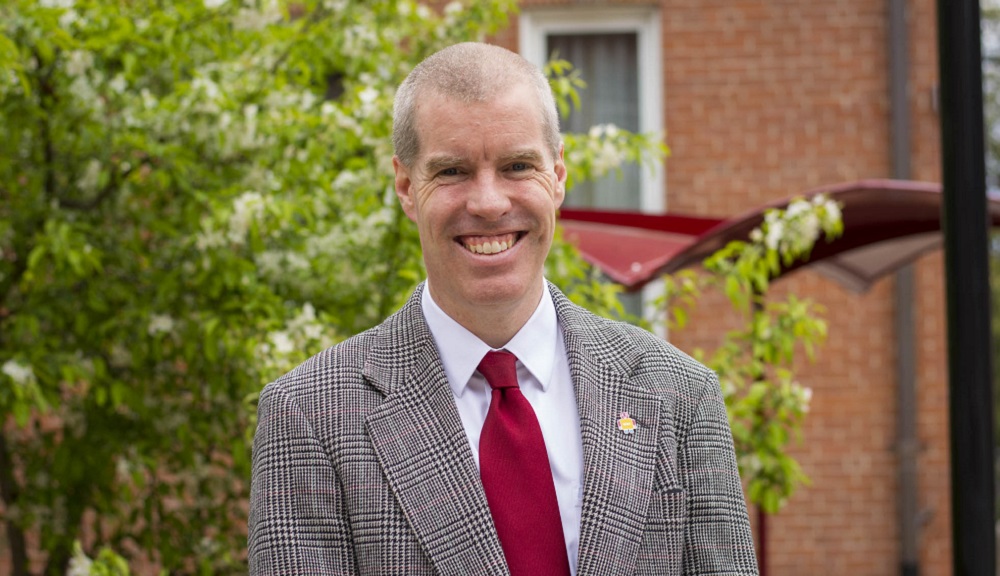 At this year’s Faculty Convocation, five faculty members and one teaching assistant were honored by their peers for excellence in topics such as teaching, research, and scholarship. One so honored was computer science professor Neil Heffernan, who was presented with the 2017 Trustees’ Award for Outstanding Research and Creative Scholarship for his work on the ASSISTments program, which has been years in the making.

The presentation was prefaced by remarks from vice provost for research Bogdan Vernescu. “He brings energy and passion to his research with the ASSISTments system. His work is visionary, sustained, and highly successful,” Vernescu said, going on to cite one of Heffernan’s recommenders for the award, who said that, “As a researcher, Dr. Heffernan hits the perfect trifecta: craftsmanship, peer reviewed scholarship, and national and international recognition.”

As recipient of this award, Heffernan will lead the procession at tomorrow’s graduate students commencement ceremony. The honor is especially fitting for a professor who’s spent the majority of his life championing the fundamentals of education, and always working to make improvements in the lives of students.

“I can’t believe I get paid to do the job I do and support students,” Heffernan said during his acceptance speech, when he was quick to recognize his wife, Cristina, who has been collaborating with him on the groundbreaking program since its inception.

The Heffernans have worked on the program since 2002, and one only has to spend a few moments with them to understand how much of a labor of love ASSISTments is to them. The computerized system gives students immediate feedback as they complete their homework, and teachers receive a report listing the issues that gave students the hardest time, making for a more effective lesson the next day, a decrease in math anxiety, and an increase in student learning.

“I’ve been interested in education and educational reform since high school, and had strong opinions on how we could and should actually change schools,” Heffernan explains. During his time at Amherst College, he ran tutoring programs and worked as a campus recruiter with Teach for America, an organization whose members teach in low-income schools and work to increase opportunities for their students. He eventually recruited five percent of his college class and went on to join Teach for America a few years later, teaching middle school mathematics and science at an inner city school.

"He brings energy and passion to his research with the ASSISTments system. His work is visionary, sustained, and highly successful." -Bogdan Vernescu

During his second year of teaching, he wanted to give his students access to the best algebra class possible, citing that “they can’t demonstrate their potential to a university … There’s no way they can get out of poverty if they don’t get algebra.”

To help his students, Heffernan regularly made up extra worksheets, problems, and quizzes tailored to each student’s trouble spots, but it was difficult to keep track of those individual needs. Soon enough, his background in computer science kicked in, and he realized he could computerize the process. ASSISTments was born soon after, leading to presentations on innovative assessment and innovation at White House visits in September 2016 and efficacy studies in Maine, among other states, to prove the program’s effectiveness. Since then more than 50,000 students have solved 12 million problems, thanks to the Heffernans’ work.

Heffernan’s office features a wall dedicated to grant applications, which he hopes to apply to in order to further broaden ASSISTments’ reach and the positive impact it has had on both students and teachers. With Cristina and vice president for university advancement Bill McAvoy, he will visit the Alfond Foundation later this month to present additional research and, hopefully, secure grant funding to improve ASSISTments even more.

Heffernan is now in the process of creating a system for teachers to use each other’s feedback messages to help their own students (“I’m not the only guy with ideas,” he says), and eventually, he would like the program to expand for use in physics and chemistry.

“There are changes happening in the classroom,” he says. “Teachers are changing the way they’re going over homework.”