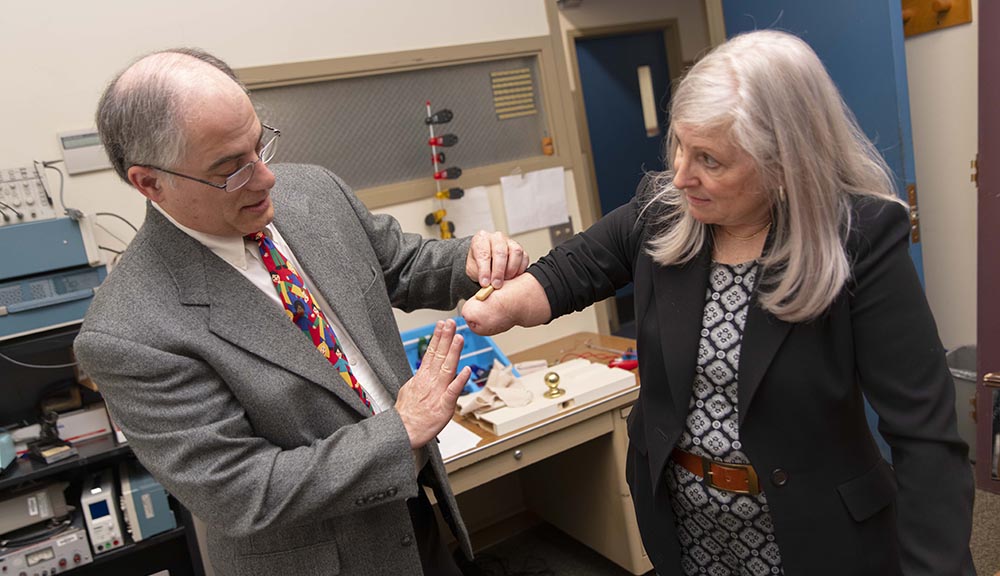 WPI professor Ted Clancy and consultant Debi Latour have had a longstanding partnership on prosthetics research. In this scene, Clancy places a wireless sensor on Latour’s arm.

As a 14-month-old in the mid-1950s, Debi Latour of West Springfield, Mass., had the distinction of being the youngest person in the United States to be outfitted with a prosthetic arm. Although the device was helpful, she recalls the accompanying harness was uncomfortable to wear and often became hot. In fact, when she was about three years old, she threw the prosthetic arm into the trash one day, which her father inadvertently emptied into the furnace, only to quickly retrieve it before it was destroyed.

Today, she looks back on those days with a mixture of nostalgia and potential, knowing that the device that used to make her cry has actually helped her navigate throughout her life.

Latour, assistant professor of occupational therapy in the Doctor of Occupational Therapy program at Western New England University, has served as a consultant to Ted Clancy, professor of electrical and computer engineering at WPI, who is developing wireless sensors that will communicate with a prosthesis. Their collaboration aims to help future generations dealing with limb loss.

The Daily Herd recently caught up with Latour and Clancy to discuss their partnership, the inherent challenges with prosthetic devices, and their hopes for the future. 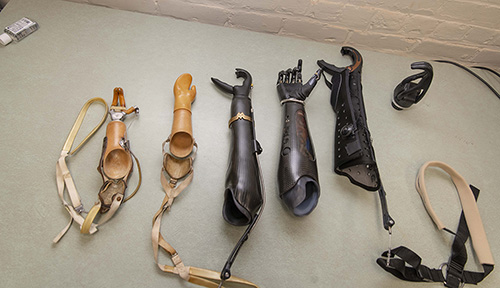 Prosthetics devices (left to right) worn by Debi Latour over her lifetime.

So, tell me, when did you two first meet?

Ted Clancy: At LTI (Liberating Technologies Inc., in Holliston, Mass.), through grants work, while I was on sabbatical in 2014. (Debi) would be in the building from time to time, and I don’t know if I met her specifically for a project that was funded, but she was there. Debi comes in with occupational and clinical skills. And so, we (WPI) had the engineering knowledge, but we’re not sure if we’re using it in a manner that’s going to be useful. You don’t want to be spinning your wheels. So, we asked Debi a lot of questions about what’s going to be useful, and how it’s going to be used. Are we even engineering the right thing?

Debi Latour: Exactly. What are the pitfalls? What might we be up against?

Debi, as the youngest person at that time to be outfitted with a prosthetic arm, that was really an untested time. Were there concerns?

DL: I was 14 months old, and my parents brought me to Shriner’s Hospital in Boston when I was three months old, and asked if I could have a prosthesis. The standard of care at that time was to wait until a child was five because it was thought that, developmentally, that’s when a child would be most ready. It was also an age when most children were leaving home to go to school. I was born in 1956, and a lot of kids did not go to pre-school way back then. My parents had a vision that I would be able to do everything that other kids could do.

Can you talk about the ongoing partnership you’ve had with WPI on various projects?

DL: For me, the opportunity to work with people like Ted at WPI—or even WPI’s PracticePoint group—is amazing because it’s an extension of myself. It’s an opportunity to make a difference for different populations, including the one I happen to be a member of. But it’s also a way for me to provoke the up-and-coming generation to think outside the box, to think and to transcend the boundaries of our own disciplines. If engineers thought only among engineers, and occupational therapy practitioners thought only among our own discipline, how would we further develop new and exciting technologies? It means a lot to me, and it’s an honor to work with a group like this.

TC: Part of what you want with the team is to get the expertise together to solve the problem. Individually we can have the passion, but we don’t have all the pieces. So I bring a set of skills, and it’s great when I get to sit with people like Debi, and with Todd Farrell of LTI, who have different perspectives and see different clients and roles. So when we put our heads together, we do a lot better. We learn from each other. I know I’m learning from them.

What do you see as the biggest barriers to this field?

DL: The biggest barriers in any scenario is a closed mind. Not thinking about what are the possibilities and what is the potential.

TC: Technologically for a number of years, for upper limbs, the biggest barriers have been getting the human intent out of the body in order to tell the prosthesis what to do. We can make good mechanical robotic hands and wrists, but it’s very challenging to get the information out that’s in our nervous systems.

Finish this sentence: In 10 years, WPI research will enable those with limb absence to…

TC: I certainly hope that, between us and others in the field, to develop the technology to control hands and wrists simultaneously.