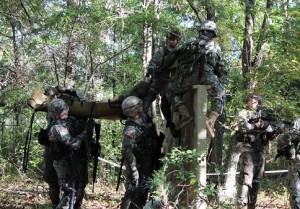 Members of the WPI Army ROTC team conduct
a mock evacuation of a injured cadet
in the obstacle course.

A team of local ROTC cadets, including seven from WPI, matched wits, speed, and stamina with 41 other groups from the Northeast at the Army Ranger Challenge, held October 16–18 at Fort Dix, N.J..

Senior Kyle Foley, juniors Jonathan Rheaume and Matt Nicholson, sophomores Thatcher Van Atten, Marcus Knodler, and Devin Stevens, and freshman Ben Seitz—along with cadets from Holy Cross and Worcester State—participated in the competition this year. The teams vied for points based on how they respond to mental and physical challenges, through events that include land navigation, written and fitness tests, a 10K forced march, and tactical trials, among others. Points were awarded on speed, tactical accuracy, sequence, and mental and physical prowess. 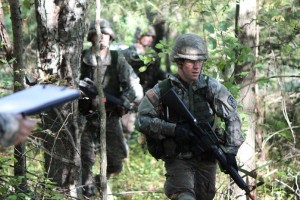 This was the third trip to the Ranger Challenge for Rheaume, the team captain. He says cadets try out for the team because it offers the opportunity to speed up their training and also practice skills not usually part of their regular drill.

Cadets from the Baystate Battalion, of which WPI is a part, can try out every year for the Army Ranger Challenge team at the beginning of the school year. The nine members and two alternates selected for the team then train five times a week, frequently on weekends. ROTC cadets normally train three times a week, Rheaume says.

In past years, the Challenge has focused mainly on physical tests, he says, and the Baystate Battalion team typically places among the top six. This year, however, the organizers revamped the Challenge, emphasizing Army knowledge over physical speed and stamina. The competition changes, combined with a team made up mostly of less-experienced sophomores, resulted in lower scores than in past years. 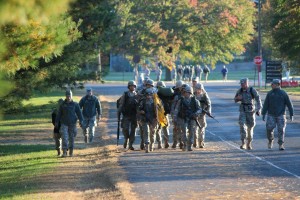 The WPI cadets carry a mock casualty
in a 10-K road march.

“It was a big learning curve for a lot of people,” he says. But rather than being disappointed, the team felt good about their experience. “The new style of competition is a big improvement. We were given the opportunity to use our critical-thinking skills, adapt and change direction on the fly, and solve problems we weren’t prepared for,” skills that are all tenets of a WPI education.

The Ranger team will relax a bit after their intense fall workout schedule, then meet once or twice a week to review how they can improve on their performance.

“We definitely plan to be back in the top next year,” Rheaume says.