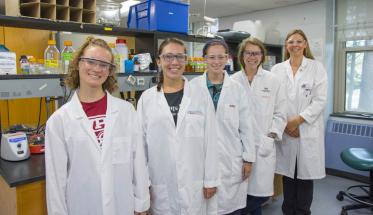 WPI Team Gets the Lead Out (of Water) for iGEM

Six students to participate in annual competition in Boston

It’s still a few months away, but biology and biotechnology assistant teaching professor Natalie Farny and her team have been working all summer on their offering for the 2017 International Genetically Engineered Machine (iGEM) competition.

Held annually in Boston, iGEM is a worldwide event where teams collaborate over the summer to build genetically engineered systems, ultimately producing projects that will have a positive influence on their local communities and the world.

Participating teams are given a DNA Distribution Kit of interchangeable parts called BioBricks that they can use to design and build biological systems, then operate them inside living cells. The students have the option of developing their own project or building upon one from past years. At the end of the event, teams add any new BioBricks they’ve created to iGEM’s Registry of Standard Biological Parts, giving future teams the opportunity to work on or with them in the future. 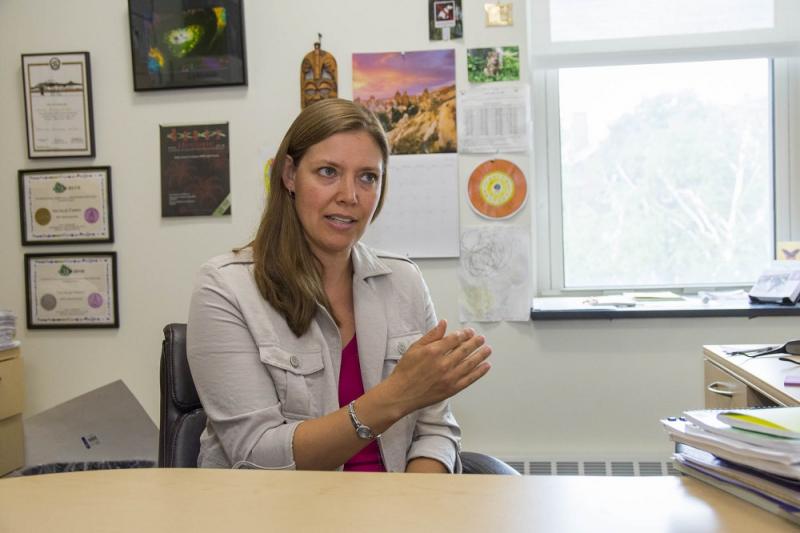 Although work on the actual project began early in the summer, Farny and her team first began working together in early 2017, allowing for project brainstorming and registration. Their DNA Distribution Kits were received in the spring, and it’s been full steam ahead ever since.

WPI has been participating in iGEM for the past four years, a tradition that began when Farny arrived on campus as a faculty member.

“I was involved in [iGEM] as a graduate student, and it was a great experience,” she says, going on to explain that when she was hired at WPI, biology and biotechnology department head Joe Duffy was intrigued by her involvement in the program. “He’s really enthusiastic about the program, too, and is a big supporter.”

This year’s team have set their sights on an important problem affecting countless people—lead contamination in water—and are inspired by the water crisis in Flint, Mich.

“There are lots of schools, including Worcester Public Schools and Boston Public Schools, that use bottled water for the entire school system,” Farny says, adding that the problem has grown in scope due to the aging infrastructure, which includes lead pipes that can result in lead contamination. “This is an ongoing problem locally, but also nationally.”

The team’s project is twofold and aims to provide solutions to the widespread issue. The first part of their project involves developing a bacterium that will serve as a biosensor and change colors depending on the amount of lead contamination in a water sample. Bacterial systems that can respond to lead are already known, Farny says, but her students’ work aims to improve the system to detect lead at the actionable level. If lead has been detected, the second bacterium can be used as a probiotic to reduce the amount of lead contamination in water that’s already been consumed.

“These are bacteria that are not only good at sensing lead, but are also good at keeping lead or other heavy metals out of cells by having it bind to the outer surface instead,” Farny explains.

“Science has to be done openly, or it doesn’t get done well.” -Natalie Farny

Each year, the iGEM competition concludes with the Giant Jamboree, an event that gives all teams the opportunity to share their work and celebrate their accomplishments, which are the focal points of the program, something that rings true with WPI’s emphasis on collaboration over competition.

“Part of the competition is that everything is shared [and] open-sourced,” Farny says. “The whole competition is really meant to be a collaborative experience.” She goes on to explain that students are posting their work on a wiki that they’re building, allowing others to see their progress, notebooks, and other information. Although medals are up for grabs—teams can win bronze, silver, or gold—their requirements ensure that participants will have to work together to earn them. For example, one of the requirements to earn a silver medal is for a team to have collaborated with another team; bronze winners have to have a complete wiki available to the public as part of their work.

While iGEM offers invaluable experience and opportunities while giving students the chance to see what science is like day to day and define what kind of science they’re interested in, Farny believes that the most valuable lesson her students will receive from the competition is the importance of collaboration in a scientific environment, and sharing what they’re working on.

“Because, really, science has to be done openly, or it doesn’t get done well.”