SuccessfulStudent.org has named WPI one of the 27 Best Video Game Colleges 2015 for its Interactive Media & Game Development program. WPI came in at #10, cited for encouraging “its graduates to build unique portfolios that will be competitive in the career world through project-based learning.” 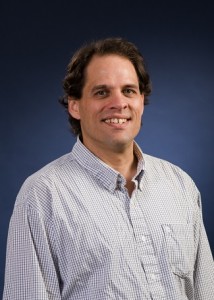 The website, which ranked the programs from a student’s point of view, noted that in IMGD, “Students are … required to interact at all levels of the game design process, including content creation, programming, testing, and project management.”

This assessment is no surprise to IMGD director Rob Lindeman, who says, “What we’ve tried to do is mimic the industry, developing our students to be specialists in one area but to also work in teams to communicate with each other, to exchange ideas, or to make the project better in general.

“If you ask any employer, they want students who can communicate, solve problems, and collaborate. All of these things are the things you get from the project-based curriculum in IMGD,” he added.

Lindeman says balance is a key component of the IMGD program because it’s also important in game development.

“People think, ‘Hey, this is great, I’m going to play video games all the time.’ But it’s very hard to make compelling, long-lasting video games that people actually want to play.” You have to bring together a balance of top-notch visual design, complex choices, and strategies, he says, adding, “Careful design can lead to a much better play experience.”

The only way you can develop these [game] products is if you have really, really good artists and designers, as well as really good technology people.
Rob Lindeman
IMGD director

Balancing game technology with human interaction and social needs is another aspect of the IMGD program that impressed SuccessfulStudent.org. Lindeman says the philosophy, ethics, and sociology of games is discussed in classes so that students consciously think about how technology affects society and how society affects technology. And it’s not just an IMGD priority: all WPI students participate in the group-based IQPs, where they address a problem that lies at the intersection of science or technology with social issues and human needs.

The Top 27 list includes art schools, tech schools, major universities, and small liberal arts colleges. Lindeman says the IMGD program stands apart from many schools on the list because of the type of student it attracts. Unlike many similar colleges, WPI doesn’t admit applicants by major, so all students are accepted based on the same academic requirements.

“An artist at WPI needs calculus. An artist at more mainstream school doesn’t. Therefore, we get a very different kind of artist than you get at RISD, for example. And that works out well in [preparing for] the game industry,” he says.

Furthermore, the IMGD program was conceived to put equal emphasis on design and technology, Lindeman says, noting that many college programs began either as art programs that added some tech classes or vice versa. 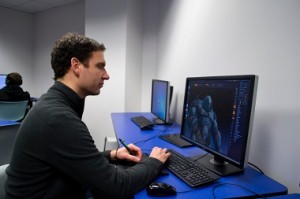 “When the program started out, we made a conscious decision to make it a balanced program. The only way you can develop these [game] products is if you have really, really good artists and designers, as well as really good technology people,” he says.

“We made a huge effort to create a digital art program and now have 35 IMGD courses. By far, most of them are nontechnical, design, audio, visual art classes. Only five or six are technical. That’s a huge, huge investment into something that didn’t exist before.”

According to SuccessfulStudent.org, the factors that went into consideration of the ranking were: “Well rounded academics, cost, career prospects in the gaming industry, cutting-edge technological instruction, a track record of graduates making an impact in commercial video games, and proximity to video game and entertainment epicenters. The ranking mostly includes bachelor’s degrees, but there are some master’s degrees mentioned as well. In cases where the college offers both undergraduate and graduate degrees, both programs were considered.”

Lindeman says that given the breadth of the programs included in the list, “We must be doing some things well if we came out at number 10.”