Several students and faculty from WPI’s Interactive Media & Game Development (IMGD) program will be heading to the annual Game Developers Conference (GDC) today (Feb. 27) to network, reconnect with alums, and showcase everything WPI has to offer to the game development world. 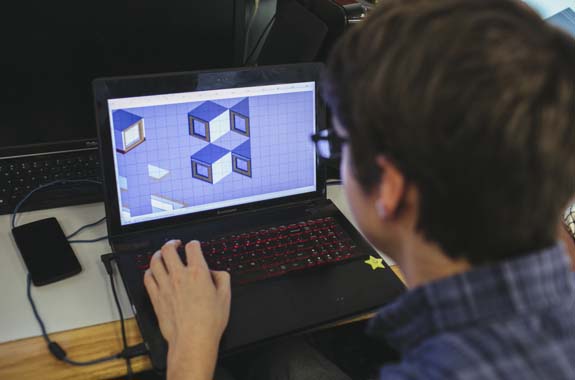 A student works on a game in the IMGD computer lab.

The conference, in San Francisco Feb. 26–March 3, is the world’s largest professional gaming industry event, and WPI has been attending since IMGD’s inception in 2005. Some attendees from WPI, like professor of practice Lee Sheldon, are focusing on acting as ambassadors for IMGD and the university as a whole during this year’s conference; others will give presentations, and participate in talks and competitions.

“This is the biggest gathering of professionals in the field of game development,” says IMGD professor Dean O’Donnell. “Our students are going to be networking and hopefully landing jobs and internships. …You never know what will happen at GDC.”

In addition to Beth Beinke-Schwartz ’09 and Alex Schwartz ’09 giving presentations on single versus multiplayer level design, improving character interactions in virtual reality games, and the challenges of creating VR content, respectively, WPI will also have students presenting posters in the annual GDC Narrative Review Contest. As contest winners, graduate student Yakin Najahi and Michel Sabbagh '17 wrote papers analyzing the structure of narrative elements in games of their choice, and now have the opportunity to present a poster going more in-depth on their work. This is the third consecutive year that WPI has had winners in the Narrative Review contest.

Professor Alexandrina Agloro will give a presentation on a project of hers that was funded by a WPI Faculty Learning Community Grant on Global Multicultural Competency. She will also attend the Education Summit track to learn how IMGD can better educate and prepare students to be informed, educated participants in civic life. But what she’s most excited about is leading a team of WPI students who have been selected as Different Games Ambassadors.

The Different Games Collective (DGC), a collaborative that works to foster diversity and inclusivity in games and games culture, invited organizations in alignment with their mission to apply to be DGC Ambassadors and receive all access passes to attend GDC. Agloro received this award with Kelly Zhang ’18, graduate student Klew Williams (who won the Narrative Review Contest at last year’s GDC), Rachel Burton ’17, and Gina Gonzalez-Roundey ’17.

As a DGC Ambassador, Zhang is excited to represent women and Asian Americans in the games industry. “There are often talks about the industry being very homogenous, and I hope that as DGC Ambassadors, we can push visibility towards unrepresented groups of game developers,” she says.

Burton, who recently collaborated with a Becker College student to run a video game workshop at the Worcester Public Library, agrees. “I’m representing folks who wouldn’t normally be represented in games,” she explains. “As a queer woman, I get to add myself to the discussion of what being a game developer means.”

"I am thrilled that a team composed of all queer women and women of color are representing WPI on a national stage; I’m super proud of these IMGD students, and proud that our presence and work will be the face of IMGD and WPI." -Alexandrina Agloro

While giving a voice to underrepresented groups in games is a highlight of being a DGC Ambassador for everyone involved, Williams has another goal she’d like to achieve as an Ambassador. “I want to spread awareness that video games aren’t isolated from academic inquiry, that studying games is just like studying other media, and that out of an academic approach can come a lot of cool new ideas and neat games. It’s not an approach many take, and WPI does it really, really well.”

“I am thrilled that a team composed of all queer women and women of color are representing WPI on a national stage; I’m super proud of these IMGD students, and proud that our presence and work will be the face of IMGD and WPI,” Agloro says, going on to explain how she hopes that WPI’s presence at GDC will, “… indicate to the games field that prospective students who value difference and inclusion should come to WPI as the preeminent place to make and study inclusive games.”