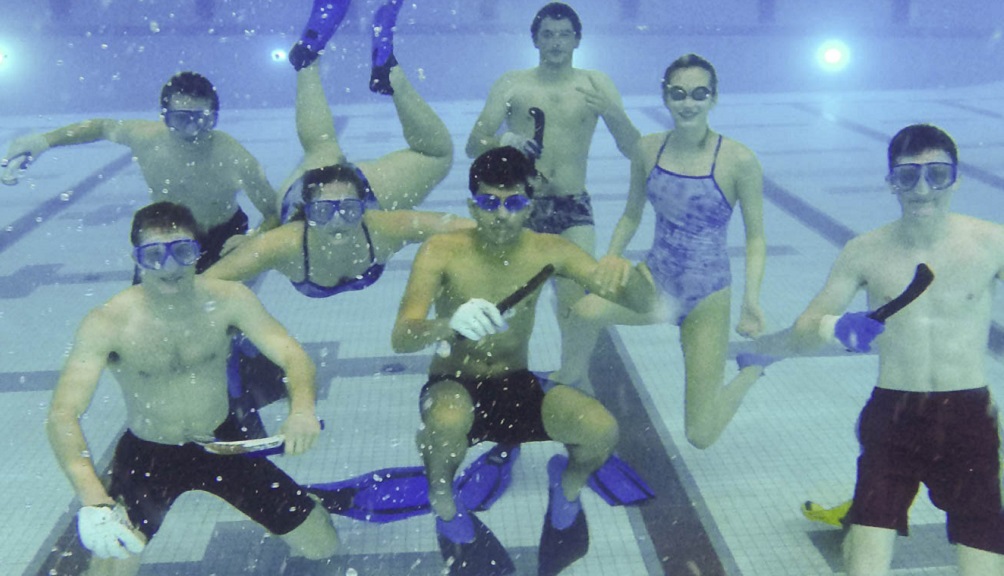 Leave it to WPI students to take over the pool in its decidedly unfrozen state with the underwater hockey team.

While it definitely bears similarities to its frozen brethren, underwater hockey is still in a league of its own. The puck is weighted, and the sticks are short to help provide players with better control under the water’s surface.

No pads, skates, or gloves here: instead, players wear masks, snorkels, and fins, working together to try to score the most goals, which are located on the walls lengthwise on each end of the pool. The playing area consists of the length of the pool as well as the width of four lanes, creating a rectangular underwater rink. The WPI team usually plays four versus four, with two defensive and offensive players per team, and no goalie.

Harrison Czajkowski ‘18 has been involved in underwater hockey for three years; he joined the team after being a swimmer in high school. “This seemed like a fun way to continue that hobby,” he explains.

Because underwater hockey is a fairly niche sport, Czajkowski and his teammates don’t normally compete against other schools; instead, they break up into teams and scrimmage against each other.

If you’re worried about being checked into pool walls instead of boards, or afraid to dip your toes into the pool because you don’t consider yourself the next Bobby Orr or Katie Ledecky, don’t be. Underwater hockey is a non-contact sport, and newcomers are always welcome—current players ready and waiting to show them the aquatic ropes.

Czajkowski explains that each round of the game lasts anywhere from two to eight minutes before a quick break to catch their breath. While one player can maintain active play underwater for almost a minute, Czajkowski holds his breath in what averages out to be 15-second intervals during shorter rounds (unless he’s going for the puck, of course, in which case he pulls out all the stops and holds his breath for as long as possible).

As it turns out, being able to hold his breath paid off into one of Czajkowski’s favorite memories from the team: when he managed to score a goal off of just one breath. “It was a lot of fun,” he says, “and I love seeing other players pull it off for the first time, too.”

Students interested in donning fins and snorkels for the next underwater hockey game may email the club, or stop by the pool during one of its games; it'll surely to be easy to find.

This is the third of the "WPI's Got What?" series, highlighting the variety of clubs and organizations at WPI. Check out other clubs that have been profiled as part of the series: