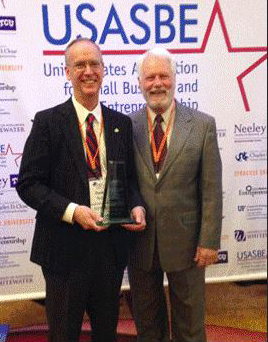 The new year got off to a great start for WPI School of Business professor Frank Hoy. He was presented with the Max S. Wortman Jr. Award for Lifetime Achievement by the United States Association for Small Business and Entrepreneurship (USASBE) at its 2014 conference in Fort Worth, Texas, on January 9.

The award, instituted in 2004, recognizes a lifetime in entrepreneurial achievement that encompasses the ideals of entrepreneurial activity. Eligibility extends to members who have engaged in successful venture creation, and to those whose life’s pursuits supported and advocated entrepreneurial ideals. The award was named for former USASBE president Max S. Wortman Jr., its first recipient.

Based in Wisconsin, USASBE describes itself as the world’s largest independent, professional, academic organization dedicated to advancing the discipline of entrepreneurship. Hoy has been a USASBE member for “many years,” and served as its president in 2003.

“A previous award winner had been asking me for a few years for permission to nominate me,” Hoy reveals.” In prior years, I had refused either because I was nominating other candidates or because travel prevented me from attending the conference and accepting the award.” This year he was available and willing.

While Hoy was not given details of his nomination, he believes it may have stemmed from his service to USASBE, both in holding office and participating in conference presentations. He adds that his involvement in starting and growing ventures may have also been a factor.

To Hoy, receiving the award is recognition by his peers that he has played a leadership role in advancing entrepreneurship education and research. And while he is grateful to have been chosen, he says WPI should share the honor.

“From my point of view, I want WPI to get mileage out of every honor any of our faculty members receive, and every ranking our programs achieve. If someone at WPI receives an award, it should enhance WPI’s image and reputation.”

On hand for the awards ceremony was John Pettit, a former University of North Texas (UNT) professor whom Hoy describes as his mentor and the person who encouraged him to pursue a career in academia.

“I [initially] rejected his advice because I was not interested in the career option and wanted practical experience in the private sector,” Hoy recalls. “John remained in touch with me after graduation; a few years later, he identified an academic position and talked me into applying. I finally agreed and made the decision that led to my coming to WPI 30 years later.”

He says that Pettit, now retired, has remained a mentor and supporter during the years since UNT. The two have kept in touch and their families are close. Hoy notes that he visits with Pettit whenever he ventures to the Dallas-Fort Worth area.

Ray Bagby, a professor of management and entrepreneurship at Baylor University, said in nominating Hoy for the award that he “is the quintessential model for this award. He has had a long, distinguished career spanning three decades while contributing in outstanding ways to education, research, and practice.”

According to Rebecca White, USASBE’s 2012 president and professor of entrepreneurship at the University of Tampa, it was Hoy’s own history of mentorship that stood out most.

“He has been an exceptional mentor to so many people,” she said, “continuously assisted others—whether doctoral candidates or more senior people transitioning to the field—to integrate into the entrepreneurship community and to develop to their full potential.”

White also pointed to his having published more than 50 articles on small business and entrepreneurship, and coauthoring nine books and textbooks.

As part of the award, Hoy will receive a plaque and lifetime membership in USASBE, and his name will be listed on the organization website alongside former recipients.