Making a Difference from Massachusetts

The news has been peppered with stories of destruction as citizens of Houston, Florida, Puerto Rico, and other areas begin to recover from the devastation caused by the recent onslaught of hurricanes.

While much of the news is harrowing, the destruction has also sparked camaraderie and strength, with people around the country—and the world—dedicating themselves to helping those affected get the support and stability they need. With every heartbreaking story comes five hopeful ones: tales of stores opening their doors to those displaced by the storms, mountains of donations, volunteers traversing the flooded streets to help rescue more survivors. 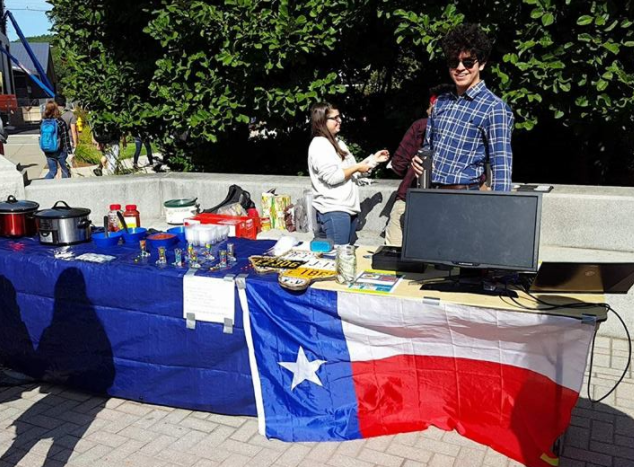 Students at their fundraising table.

Still, it can be easy to feel helpless, especially thousands of miles away in Massachusetts—but several WPI students are taking matters into their own hands, raising money for those affected by the storms.

After learning of the devastation in their home state, Andrew Nagal ’18 and Susan Elliott ’18, from Houston and Katy, Texas, respectively, worked with fellow WPI Texans to begin fundraising efforts.

“I felt powerless being at WPI when Harvey hit,” Nagal says. “It was horrifying to see how Harvey impacted the city I call home and how hard the experience was for my friends and loved ones.”

Nagal got the ball rolling by posting in Team Texas, a Facebook group made up of students hailing from the Lone Star State, to gauge interest in fundraising. Their efforts took off almost immediately, with students volunteering to sell chips and queso, Texas stickers, toothpick holders shaped like cowboy boots, and other Texas memorabilia at a table set up by the Fountain in the middle of campus.

Over the course of a few weeks, the students had raised over $3,200 through their in-person fundraiser and virtual fundraising page, with all proceeds going to the Houston Food Bank.

Although many of the students hadn’t met in person, Elliott says there was no hesitation when it came to working together. “It was really cool to see a group of Texans who didn’t necessarily know each other well beforehand come together to make this fundraiser to benefit our home.”

“It was really cool to see a group of Texans who didn’t necessarily know each other well beforehand come together to make this fundraiser to benefit our home.” -Susan Elliott '18

With Hurricane Irma coming in on the heels of Harvey, students were once again spurred into action to help those affected by the storms. Kevin Bimonte ‘20, a native of Miami, has begun working with the Student Activities Office to create a Red Cross mini-burst page to raise funds online. There are also plans for the project to reach beyond the WPI campus, with other local schools having the opportunity to participate through the Worcester Student Government Association and the Higher Education Consortium of Central Massachusetts.

“As soon as I heard what was happening, my heart just broke because I knew that the home I left was not going to be the same home I would go back to come fall break,” Bimonte says. “I hope that the money raised from our consortium can be used to rehabilitate Florida.”

A common characteristic found in WPI students is their selflessness and desire to help others. While Nagal, Elliott, and Bimonte all lamented the fact that they couldn’t be in their home states to help their families and neighbors rebuild, it’s clear that their hard work will still make an invaluable difference.