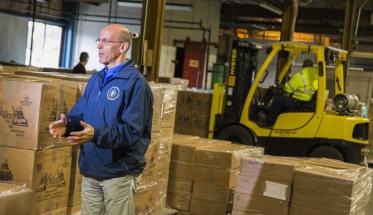 Students who had looked forward to spending B-Term doing IQP work in Puerto Rico are instead focusing their efforts on helping island citizens resettling in Worcester, organizing relief efforts, and learning from public safety responders how serious the situation is in the aftermath of Hurricane Maria.

Meanwhile, the university assisted the Massachusetts Emergency Management Agency (MEMA) in collecting, organizing, and shipping donated materials to the island, home to 3.5 million. 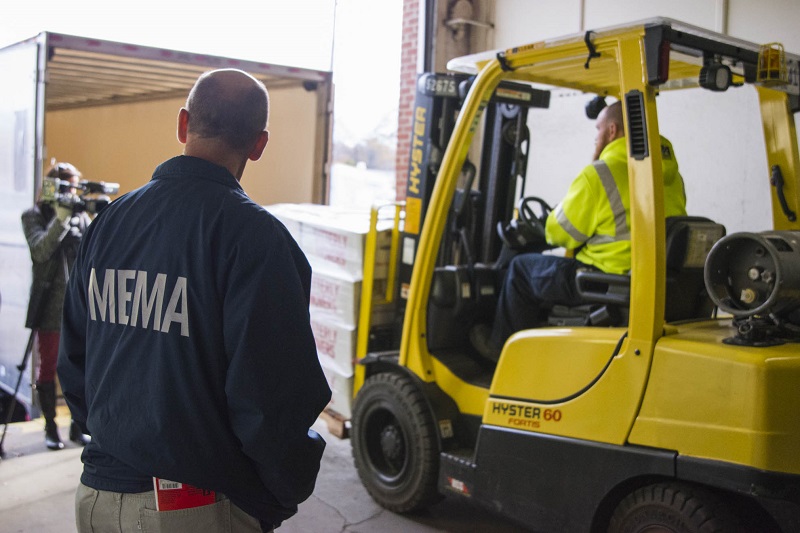 A forklift operator loads a Teamsters truck under the supervision of a MEMA official.

WPI students have done IQP work in Puerto Rico for about 25 years. This year, 22 students were prepared to take on five different research projects in this U.S. territory in the Caribbean; they were scheduled to fly out on Oct. 21 and work there through the middle of December. Nineteen are electing to stay with the Puerto Rico project, according to Anne Ogilvie, executive director of WPI’s Global Projects Program.

When WPI heard that MEMA had an immediate space need for disaster relief operations for Puerto Rico, the university immediately offered the its newly acquired, 30,000-square-foot building at 15 Sagamore Road. As a result, the vast space with its easy large-truck access and open space for storage was a natural fit for MEMA’s needs to collect, sort, organize, and package materials—including necessities like child and adult diapers, formula, canned food, rice, pet foods, first-aid supplies, and water.

Dan Sarachick, director of environmental health & safety in WPI’s Facilities Division and a member of Worcester’s local emergency management planning committee, heard about MEMA’s need through WPI Police Chief Cheryl Martunas. With highway access, a nearby airport, and plentiful local resources, they both knew getting the message to those who could decide to offer the space was essential.

“The decision makers at WPI found a way to do this very quickly,” says Sarachick. “Within two days, MEMA was on site.” From that point, the community mobilized very quickly, with WPI and local retailers offering everything from labor to tables, to shopping carts for moving materials, to forklifts. The Holy Cross baseball team sorted for two days alongside members of Adventist Health System and Boston Cares. WPI police organized much-needed shuttles to get volunteers on-site. In fact, says Sarachick, so many volunteers were on hand that there was no chance for WPI to mobilize a cadre of volunteers from the campus.

WPI police Lt. Karen Bueno is one volunteer who felt a personal need to physically assist with the efforts. A native of Puerto Rico with extensive family still living on the island, Bueno was overwhelmed by the swift reaction of the WPI community and local region, and by the sheer volume of donated materials and labor. As her relatives struggled to find gasoline to keep generators running and clean water to drink, Bueno felt helpless. “I wanted to go down there, but I was not able to. I had to do what I could do from here,” she says. “This was the least I could do.” 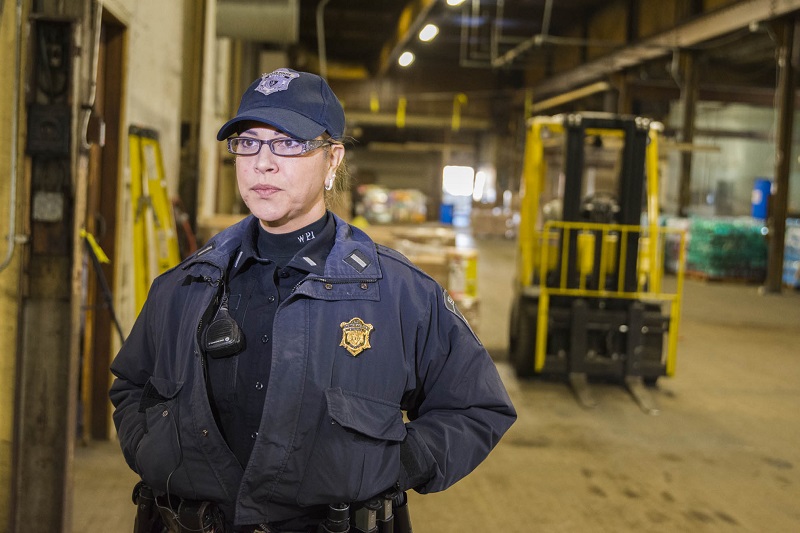 As part of the hands-on relief effort, Bueno says she felt a kinship with the other volunteers, some of whom had family in Puerto Rico and some who just wanted to help. “I teared up,” she says. “It was unbelievable how hard they all worked. No one looked at race—this was about another human being needing help, and they were there to help no matter what.”

Update: On Nov. 27, MEMA loaded the 264 pallets, consisting of bottled water, canned goods and non-perishable food, baby food and diapers, flashlights and batteries, and personal hygiene products, onto trucks for transport to Florida, where they will be loaded onto cargo ships and aircraft for delivery to Puerto Rico, according to MEMA director Kurt Schwartz. The goods were donated at community events across the state before being collected by the National Guard and brought to the Sagamore Road warehouse.

As the hurricane hit Puerto Rico, many students who were planning to travel there for their IQPs had to shift gears. Nicholas Williams, professor of interdisciplinary and global studies and one of the advisors to the Puerto Rico IQP teams, says the teams have turned an unexpected situation into one where they can do just as much good for Puerto Rico’s residents working from their project base in either Action! Worcester’s Worcester Idea Lab, a collaborative workspace downtown, or the WPI’s Worcester Community Project Center. 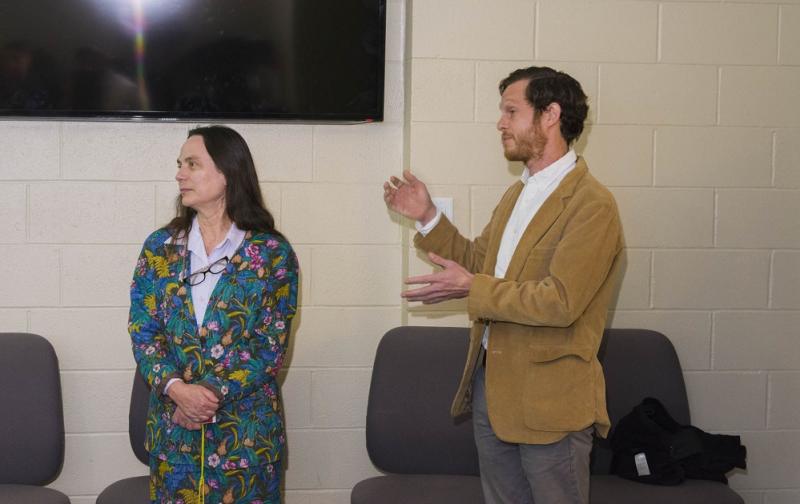 “Of course, there was a moment for all of them when they realized they were not going to be able to go,” says Williams. The honest feelings of disappointment soon gave way to a drive to help with the resources they had available. One team is continuing to investigate an implementation process for recreational fishing licenses while another team that originally planned to work directly with a San Juan community has refocused on the resettlement efforts of some Puerto Rico residents who are coming to Worcester. They are trying to create a way to get these people fast, accurate answers to how healthcare or public schools work in the region.

WPI’s partnership with the Idea Lab gives the students an opportunity to complete project work off campus and in an environment where they are exposed to a cultural and business side of Worcester they might not have seen before. “This is a great kickoff to our partnership with WPI,” says Joshua Croke ’14, Action! Worcester’s executive director and co-founder. Although they cannot be in Puerto Rico, students have the experience to work in a professional space downtown where they can interact with other Worcester college students and begin to form networks.

In the end, the students are gathering data that will have a positive and helpful impact on the residents of Puerto Rico, even if they aren’t there. “I am impressed with what the students have done,” says Williams. “They are creating meaningful work to help those who need it. They are dealing with complexities and getting a good glimpse into how things really work. They are figuring out who to talk to, how to find them, and even how to get them to meet with you. It is a true life lesson.”

A presentation to Puerto Rico project students on Thursday by three Worcester police officers who recently returned from the island helped WPI student Elizabeth West ’19 comprehend how much the people there are struggling. The biology and pre-health major from Royalston says the presentation held at Worcester police headquarters on Thursday validated what she had heard from a friend about the hurricane devastation.

“It helped me understand better what her family is going through,” West says. “Even though people are donating, the supply and money is not getting to people who need it. It was an eye opener to hear the officers reiterate that. “Looking at the pictures of all of the (shipping) containers on the side of the island, it shocked me to see how much stuff there is, and people are still struggling so much. I didn’t comprehend that until today. It was like, ‘Wow … this is an intense situation.’”

At the end of September, three weeks before the group was scheduled to fly out, they found out about the hurricane, Professor Williams says.

“For the sake of the students, we have two main goals,” he says, describing how they brought the students and police officers together. “For the students to understand from a practical sense how dramatic it is. They haven’t been to places following post-traumatic moments and we wanted to help them wrap their heads around it. And, not just for the shock of it—by hearing from the [Worcester] officers to give them a clear vision of what’s to come, and what’s going on now, and what we can do.”

Worcester Police Officer David Rojas, one of the presenters, says Puerto Rican law enforcement is looking at implementing a curfew and instituting martial law. Rojas and the other Worcester officers left Oct. 18 for two weeks and were paired with officers there to help with public safety efforts.

“I am impressed with what the students have done. They are creating meaningful work to help those who need it. They are dealing with complexities and getting a good glimpse into how things really work. They are figuring out who to talk to, how to find them, and even how to get them to meet with you. It is a true life lesson.” -Nicholas Williams

When the request came in, Rojas says, it was very personal for him because he has family living in Puerto Rico and has visited the island frequently.

When his flight neared the island, Rojas says he could observe the destruction, with buildings and billboards collapsed, and palm trees and vegetation gone. But, it was the perseverance of the people that struck him.

“It was striking to me to see the hustle and bustle and people striving to get normalcy back in their lives and get businesses open,” Rojas says. “It was surreal. I know the devastation and could see it, but at the same time, it was business as usual and people trying to get on with their lives.”

Kyle Opiekun ’19 of Cumberland, R.I., a student in the WPI group, says the officers’ presentation made him more determined to go to Puerto Rico one day. “You feel from our point of view there are donations, but you don’t understand the process of distributing all of those resources to who needs it,” Opiekun says. “You hear about the two ships there with resources, and Tesla helping restore power and think everything is alright, but you don’t hear what is really going on—millions of people in need and not knowing who gets what. Everyone thinks they are doing well from donations, but they don’t understand how destroyed it is.”

The program will conclude with a performance in tribute to Puerto Rico by Sheyla Rivera of AS220, an international nonprofit cultural arts center in Providence.

Simmons explains that this event had its beginnings when student Cristina Tavares emailed her office to ask if it would donate money to her student group, which was raising money to support Puerto Rico.

“We were happy to give a bit of money," says Simmons, "but I wanted to go further to raise awareness of the humanitarian issue in Puerto Rico, along with raising awareness of the community, local, and state government initiatives that are in place to support Puerto Ricans.

“We realize that we need to support Puerto Ricans on the island, neighbors in Worcester who have family on the island, and those that are headed toward Worcester fleeing the humanitarian crisis, which was also the impetus for promoting this community-wide event.”

- By Julia Quinn-Szcesuil and Paula Owen