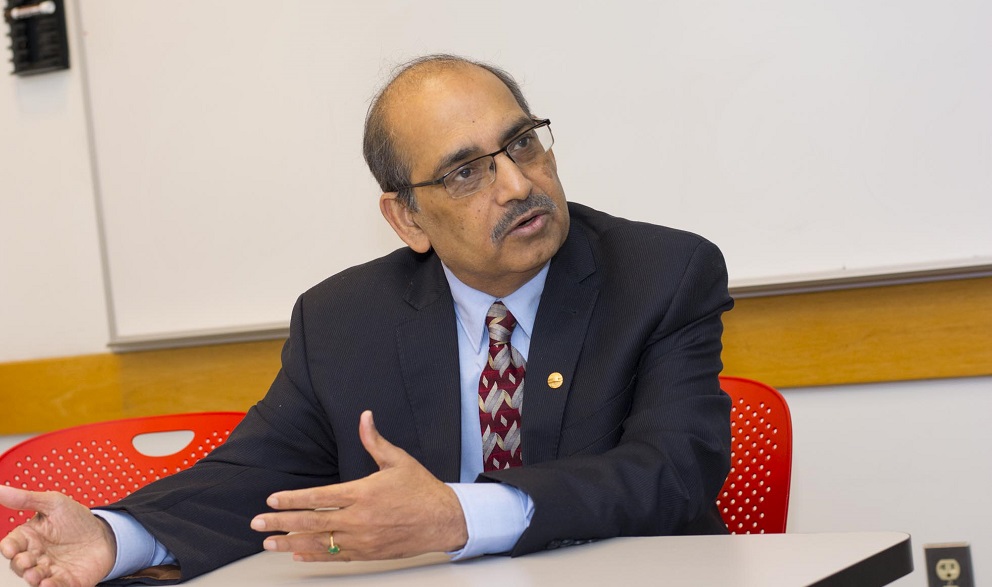 Brajendra Mishra, Kenneth G. Merriam Professor of Mechanical Engineering at WPI, was recently named director of WPI’s Metal Processing Institute, the largest industry-university alliance in North America. The Institute, which is composed of four research centers, is supported by more than 90 corporate partners as well as funding from private foundations and the federal government. MPI receives about $2.5 million annually in research funding and grants, 40 percent of which is from federal grants.

Mishra, who joined WPI in 2015 after serving as a professor of corrosion and physiochemical processing at the Colorado School of Mines (CSM), spent a few minutes with the Daily Herd to discuss a number of topics, including his early beginnings in materials science, the influence a high school English teacher had on him, and the importance of materials in everything that surrounds us.

Herd: How did you become interested in materials science?

Mishra: In India, when I was growing up, there were not that many career options available to a student, so you went into either engineering, medicine, or law. I went to a very competitive residential high school, which selected 60 students out of a pool of 200,000. Of the 60 students it took in any year, they would put about two-thirds of them into the science programs, meaning either math or biology. I was very good in math so I went into the engineering side of academics.

Herd: Did you come from a science-minded family?

Mishra: My father was a professor, and I have four sisters who are all PhDs and professors, so teaching and being in academics is what my family does. In that regard, I would say that I am in the family business.

Herd: Where do you fall in relation to your sisters?

Mishra: I have a sister who is older than me and three sisters who are younger than me. So I’m the only son, and in Indian society, the responsibility is much greater on a single son than if there were two or three boys in the family.

Herd: Did you feel a level of pressure as a young man that you had to do something special?

Mishra: Yes. I felt I had to be taking over from my father at some point in the family. And, more than that, the decision to come to the United States and live here became a matter of concern in the family.

Herd: When did you arrive in the United States?

Mishra: I came in 1981, soon after I received my bachelor of technology degree from the Indian Institute of Technology. That university was highly competitive as well, where they pick 1,300 out of half a million students. I was always interested in materials. When I look back and think of whether I should have picked another discipline—perhaps chemical engineering—I don’t regret my decision. Because if you look at materials, you realize that materials enable technology—all technologies. Everything that we use, everything that we have, is based on materials. Everything originates from the periodic table.

Herd: Who are some of your major influences?

Mishra: Last year, in my acceptance speech after being granted a fellowship in the Minerals, Metals & Materials Society, I mentioned a few people who were important to me. Even though I came from the science side, my high school English teacher, Abhimanyu Khan, mentored me and gave me personal attention.

Herd: Why was he so instrumental to your career path?

Mishra: Because he was really interested in making sure that I did well, not just in his subject but as a student in every subject. There were many other teachers who had an influence on me, but I’d single him out as one who was really instrumental.

Herd: Do you ever reflect on the lessons you learned with that teacher?

Mishra: All the time. I used to be on the debate team in high school and he was always interested in making sure that I did well. He would look at my debate script and he coached me to do well. He taught me to focus on my education. And [laughing] he knew my father, so he would tell me, "If you don’t hit the books, I’m going to talk to your father."

Herd: Do you recall a debate from high school that helped shape you?

Mishra: One that I remember quite well had the following topic: We are free, but we are not independent. I even remember the way I started my arguments. My very first statement was, "I am free to walk away from this stage. I don’t have to debate." But then I talked about how I am not independent. I am dependent on the responsibility that the institution has put on me to be here and represent them by participating in this debate.

Herd: Did you win that debate?

Herd: So, looking forward a bit, why should people care about metals and materials science?

Herd: How is the Metal Processing Institute impacting society today?

Mishra: Manufacturing is the backbone of any society’s growth and well-being. MPI supports the manufacturing industry in the United States through the development of new technology and materials.

Herd: On a lighter note, what do you like to do in your spare time?

Mishra: I like spending time outdoors walking and traveling with my wife, Deepa. We really liked visiting Greece and Costa Rica. I also love to visit my daughter, Ramya, and son-in-law, Bhavin Jariwala; as well as my son, Abhishek, who works on Wall Street. Ramya is a pediatrician in Portland, Oregon, and Bhavin works for a microelectronics company. And, of course, I enjoy going back to visit my family in India.