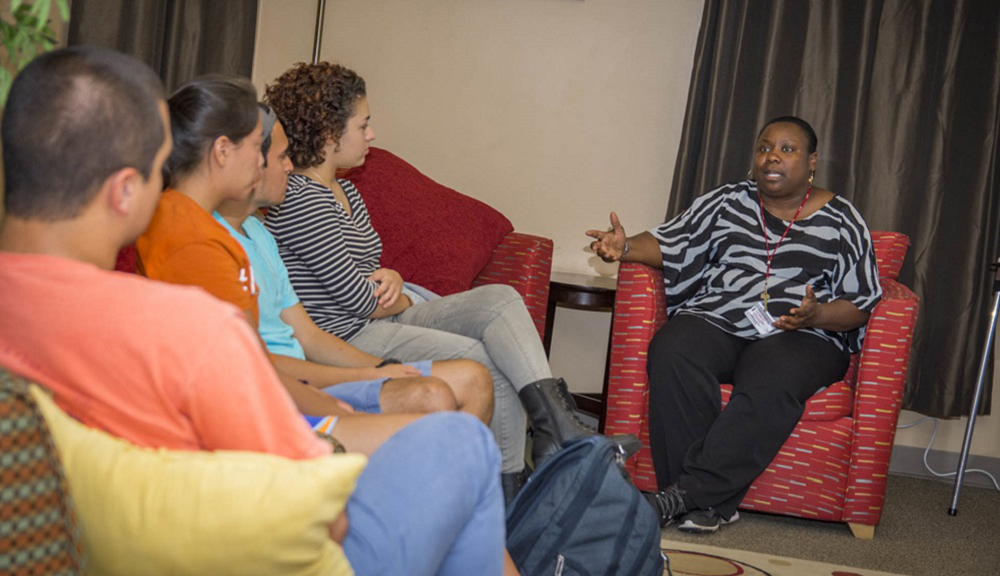 When Charlana Simmons, the new director of the Office of Multicultural Affairs (OMA) at WPI, graduated from the University of Rochester, she had plans to become a high school English teacher.

Shortly into her work, though, she realized that the job wasn’t for her, and returned to her alma mater as an academic advisor in the Ronald E. McNair Postbaccalaureate Achievement Program, a PhD prep program for low-income and underrepresented first-generation college students.

“It was great,” she says. “It was the best job I had ever had. I loved my work, supporting undergraduates who were interested in research and convincing them not only that they can get PhDs, but that they should.”

In addition to having found her calling, Simmons also sees her career shift as having an additional benefit: “I can use my story to encourage undergraduates to think broadly about what they’re going to do next.”

Thinking broadly is a common theme in the changes Simmons hopes to bring about in OMA and, subsequently, across campus. She’s encouraged by the focus on and dedication to diversity that she noticed on campus, before she even became part of the WPI community.

While working as director of the Office of Student Success & Diversity in the College of Natural Sciences at UMass Amherst, Simmons met Bonnie Walker, former director of OMA and current executive director for diversity and inclusion strategy. Both worked on the Northeast Louis Stokes Alliance for Minority Participation in STEM grant, a multi-institutional grant from the National Science Foundation that includes WPI, UMass, the University of Connecticut, the University of Rhode Island, Northeastern, and Tufts.

When Walker’s position became open, Simmons decided to dig a little deeper into WPI, and liked what she saw. “I thought, ‘This is a good place to be. This is a place where diversity is actually taken seriously,’” she says, going on to name diversity targets in admissions and movements toward gender parity and gender-inclusive housing and restrooms on campus as important steps forward. “It’s easy to do my work when I’m not also convincing the people I work for that my work needs to happen.”

Simmons has been director since April, and is looking forward to improving OMA and the campus in general. Priorities include fully staffing OMA; revamping the Collegiate Religious Center, an underutilized resource Simmons and her team would like to maximize; spending more time advising students one-on-one; and assessing methods and practices to improve their work in the coming months and years.

“We want to look at what kind of systems we have in place, and if we’re working most efficiently,” she says.

“It’s easy to do my work when I’m not also convincing the people I work for that my work needs to happen.” -Charlana Simmons

One of the most overarching things Simmons has set her sights on is working with the campus community to revise the way WPI thinks about diversity training.

“People look at diversity training broadly, but there’s so much in there,” she says, going on to name a few of the issues that fall under the general umbrella of diversity training and would need specialized attention: anti-racism, safe zone, safe space, training following an incident, among others.

In the meantime, OMA recently held the Connections pre-orientation program on campus. Unlike a traditional bridge program that increases the academic readiness of students, Connections focuses on building camaraderie and high-touch outreach and support to undergraduate domestic students of color and first-generation [to college] students.

“It’s designed to provide students who will be in the minority, racially and ethnically, a community,” Simmons explains of the Connections program, which was formed in 1993, and will serve approximately 80 incoming students this year. “Getting an opportunity to connect with people that look like you and have similar backgrounds before you get scattered, creates a home base. When the outside world becomes too much, they can retreat to this group of people ... they don’t have to explain to them what they’re feeling or experiencing because they understand.”

With a dedication to diversity and community, Simmons is working to ensure that WPI is a safe, inclusive place for all.