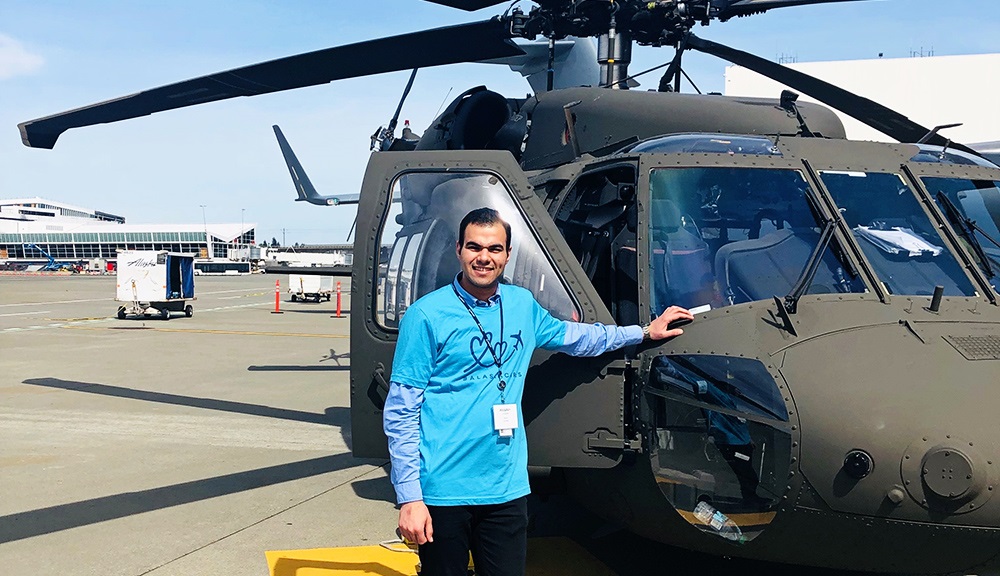 Abdullah with Boeing aircraft during his internship with the company.

Volunteerism Is Integral Part of His Life

Growing up in Babylon, Iraq, Abdullah Hussein Al-Shawk had a penchant for helping others: visiting orphanages, educating students about sexual harassment and abuse, and working with hospitals and local nongovernmental organizations (NGOs) to raise funds to help critically ill Iraqi children travel outside the country for treatment.

Things changed when an Iraqi militia group learned of his volunteerism and his ties to the U.S. Embassy, where he had attended education workshops. He was accused of being a foreign operative, the militia forcibly shut down his father’s business, and his mother was kidnapped. Looking back, Al-Shawk believes he would’ve been killed had he remained in his home country. “Coming to the U.S. in 2013 saved our lives—mine, my parents’, and my 14-year-old sister’s,” he says.

Today, Al-Shawk is a WPI graduate with a degree in mechanical engineering and a job at Boeing as a manufacturing engineer. He still volunteers, he says, “to spread the word about the importance of education to those who are unfortunate: refugees, students with low income, and those who are forced to leave school at a young age to work as laborers.”

In 2014 he started Education for Peace, a project to motivate Iraqi refugee students to go to school. “My mission statement is to use education as a weapon to bring peace to Iraq. Guns and violence never bring peace so we need to look for alternative routes to create peace in a country like Iraq,” he says.

While at WPI, Al-Shawk was active in the campus community, serving as treasurer for the Muslim Student Association and working part-time in the Admissions Office. He worked as a lab assistant in Washburn Shops in 2017 researching surface metrology—the measurement of small-scale features on surfaces—and wrote a user manual for a $200,000 microscope. He did his Interactive Qualifying Project for the Armenian Church of Our Savior in Worcester, helping write a catalog about its stained glass windows.

In 2018 he did a co-op at Cummins Company, a diesel engine manufacturing company, during which he implemented an improved technique for a factory and warehouse to communicate when replenishing parts. His work led to a cost savings of about $1M a year, he says.  He later did another co-op at Boeing.

Al-Shawk says the feeling of leaving WPI is similar to what he experienced leaving his home country.

“WPI is a home and a family. I have the same feeling as when I left Iraq in 2013, a feeling that’s mixed with joy and sadness: happy and excited about the new chapter of my life and sad to leave such a supportive community.”