When discussing the kingdom they study, scientists might refer to themselves as “plant people” or “animal people.” No matter who she is talking to, biology and biotechnology professor Pam Weathers knows her research—based on how plant therapies can help human beings—is going to benefit both camps.

This summer, Weathers’s research with the plant Artemisia annua and its ability to eliminate mosquito-borne malaria, will take her from North Carolina to China.

In June, Weathers traveled to the In Vitro Biology Meeting in Raleigh, N.C., to act as a convener for “Scaffolds from Plants and Synthetic Materials for Human Tissue Engineering,” a plenary session in which WPI biomedical engineering professor Glenn Gaudette spoke about using plant tissues as scaffolds for human tissue engineering as he did in the hearts on spinach project. His talk gave a glimpse of what this approach might mean for future research with plant materials. 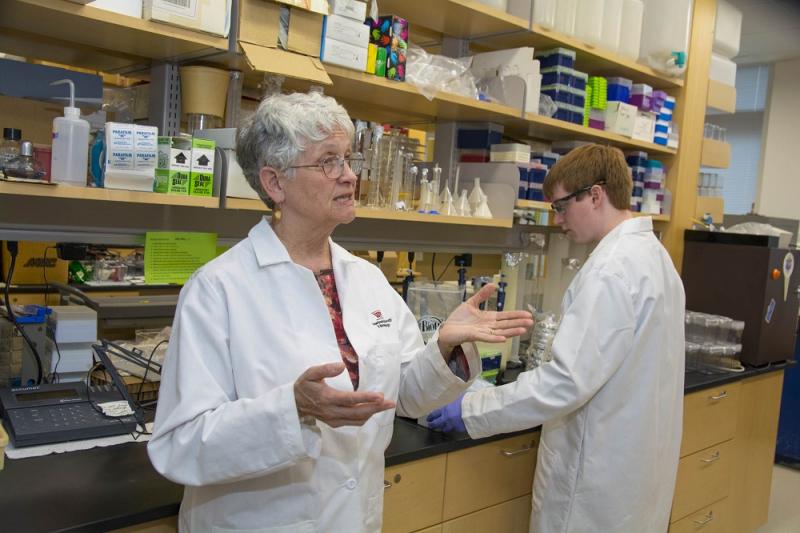 The subject of Gaudette’s plenary session with Jennifer West of Duke University was news to some of the meeting participants. “People from the plant side were encouraged to come,” says Weathers, “and many of them said, ’I can’t believe this. This is so interesting.’” That kind of reaction, says Weathers, where you can almost see new thoughts developing, is what makes her research into plants so exciting.

This meeting was particularly remarkable, as scientists within the WPI community know so much about the plant scaffolding work as do many animal-focused scientists in the wider community. It was exciting to introduce it to other scientists, especially those who primarily work with plants.

“Now the plant people are looking at this research and seeing plants in a new way,” says Weathers. “It’s really a team effort to see what’s going on. This is WPI’s baby, and it gets you looking at and thinking about plants possibly for other options.” This summer, Weathers is experimenting with using two layers of leaves to make such a scaffolding thicker. If it works, it will then go to Gaudette’s lab for further exploration in decellularization.

Plants are cheap and easy to propagate, says Weathers, so the potential for having a transformative scientific impact is high. That will be her focus as she travels to China later this month.

First, she will make a stop at the State Key Laboratory of Biochemical Engineering Institute of Process Engineering, Chinese Academy of Sciences in Beijing to meet with Chunzhao Liu, a professor of biochemical engineering. Liu spent a year and a half working in Weathers’s lab while she was on sabbatical at the Arkansas Bioscience Institute. She now runs a research group on bioprocessing.

Weathers will then head to TERPNET 2017: The 13th International Meeting on Biosynthesis, Function, and Synthetic Biology of Isoprenoids, a conference in Dalian, Liaoning Province, China, from July 16 to 20. Devoted to the metabolism and use of terpenes and isoprenoids—like artemisinin produced by Artemisia annua, the plant Weathers works with—TERPNET gives Weathers an opportunity to present at a session devoted to terpenoids and human health. She will discuss her findings in patients and in animals with her Artemisia annua studies in malaria.

Weathers is particularly pleased to be presenting in China as Artemisia annua is of Southeast Asian origin. In fact, she says, Youyou Tu from China was one of three who won the 2015 Nobel Prize in Physiology or Medicine for her studies with artemisinin.

“It’s really a team effort to see what’s going on. This is WPI’s baby, and it gets you looking at and thinking about plants possibly for other options.” -Pam Weathers

While some researchers are using a combination therapy involving Artemisia annua, Weathers focuses on using the dried leaves as compressed leaf tablets or in capsule form to treat the disease. While malaria is being studied first—primarily because of the urgency surrounding malaria’s widespread and lethal impact—indications show the treatment may be effective on tuberculosis, Lyme disease, H. pylori bacteria, some cancers, and even animal diseases. “It’s highly bioavailable from orally consumed leaves and can combat emergence of artemisinin drug resistance. The plant makes about 10 antimalarial compounds, so it is a complex polytherapy,” says Weathers. “The goal is to first get this drug into the African market.”

Before hitting the market, Weathers’s medicine must produce clinical trial evidence of the drug’s efficacy. Beginning in August, she and her team will begin recruiting 600 patients in the Democratic Republic of Congo, and she hopes to have the trial completed no later than December. In an area of the world where malaria kills hundreds of thousands, 600 people seems like a tiny amount, she says, "but it’s an important starting point."

From the results, researchers will glean if the parasite was completely eliminated from a patient’s blood and whether it remains undetectable. Weathers is also eager to see if the therapy can knock out the parasite stage that transfers back to the mosquito, thereby preventing even more infection. Although she compares the task to looking for a needle in a haystack, the potential to save lives is enormous.

“It’s amazing what people are doing with plants these days,” says Weathers. “They are trying to think outside the box.”