Mike Vaudreuil had lost his house, his once-prospering business–and, worst of all, his hope. He was beaten down. He needed something, anything, to survive not only economically, but mentally. 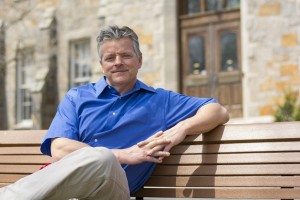 So the Worcester native took a temp job as a custodian at WPI.

Eight years later, on May 14, he’s set to walk the stage in his cap and gown at the university’s 148th commencement ceremony. The 54-year-old will collect his bachelor’s degree in mechanical engineering.

His is a story of resilience.

“It’s taken everything I had, and a lot of things I never knew I had,” says Vaudreuil. “I’m so ready for the next chapter.”

Setbacks? You have no idea.

Vaudreuil, who’s spent his life in and around Worcester, initially studied at Wentworth Institute of Technology after he graduated from high school “many, many years ago,” as he described it. He earned an associate’s degree in aeronautical technology.

I’m so ready for the next chapter.
Mike Vaudreuil
WPI custodian

But by the time he graduated, the industry was going through a recession, following the 1978 signing by Jimmy Carter of the Airline Deregulation Act. So to get himself through, he took a job with a friend’s construction company.

He thought it would be temporary. But with the housing boom, construction prospered, and, naturally, he stuck with it. For the next two-and-a-half decades, he was a plasterer by trade, eventually running his own business.

And then: The Great Recession. Within six months, he was forced to shut down his business. “It dumped me out of the economy pretty quickly,” he says, much as he and his wife, Joyce, tried to fight it, losing their savings and their home in the process. 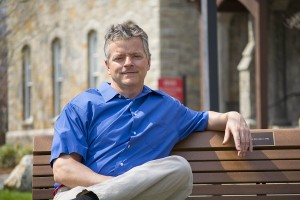 It was a traumatic time; he was jaded and disillusioned. “I worked hard and I did a good job, and I thought that was what the recipe was to be successful,” says Vaudreuil. “But it wasn’t.”

So he took the temp job at WPI, which soon became full-time. As an employee, he had the ability to take tuition-waived classes; on a whim, he signed up for some psychology courses, essentially as a “constructive way to spent time, occupy my mind,” he explains.

“I had no notion of getting a degree,” he says.

After a few courses, though, he realized that maybe there was something there for him–until he went to a job fair and came to the conclusion that the post-college job prospects in psychology weren’t all that promising. Another dead-end. He wasn’t going to let that happen again.

Still, at first, he wasn’t sure if he could do it. He was apprehensive; he was in his late 40s, he’d been working in construction most of his career. “I was questioning whether I had the aptitude to pursue it,” he says.

But after a few classes, he says, his confidence grew. “I realized, ‘I can do this.’”

And he did. He took more classes, and also enrolled in summer sessions (all the while working full-time second shift as a custodian, and also doing part-time work in plastering.) It was hectic, for sure, but things finally started to fall into place.

There were challenges, of course—No. 1 being time. Group work was especially hard, because he didn’t have a lot of leeway. He did see other “non-traditional” students along the way, although he quips that not many were at “my advanced age—my advanced experience.”

However, he notes, “I was extremely impressed by my fellow students—at no time was I made to feel like an outsider, like I didn’t belong. I can’t say enough about the student body here—they’re impressive young people. And the faculty, as well, treated me like any student, challenged me like the rest of the students, motivated me, inspired me.”

That included associate professor Ali Rangwala, with whom Vaudreuil did his Major Qualifying Project, (creating a reusable dust fuel cartridge). The project was “successful for the most part,” says Vaudreuil, who (if he can find the time, that is) would like to work on a second-generation prototype this summer.

But he particularly credits his wife, Joyce, with getting him through; for a while, they were all each other had.

“She has been my cheerleader, my greatest counsel, my shoulder to cry on—she’s also given me the kick in the pants I’ve needed at times,” he says. “She’s been everything I needed when I’ve needed it. Graduation will be a victory for both of us.”

As for the future? Vaudreuil says he is up for anything, describing himself as creative and hands-on–particularly when it comes to prototype building–and “very at home” in machine shops and manufacturing facilities.

“I’m open to many different opportunities,” he says. “I’m extremely motivated. I really want to hit the ground running. I want to make up for lost time.”