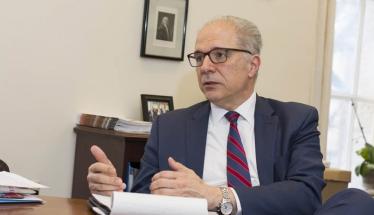 WPI Vice Provost for Research Bogdan Vernescu has been named to the Board of Trustees of the Romanian-American Foundation, an organization that provides Romanians with the kind of opportunity he never dreamed of as a young boy in his native Bucharest.

In his twenties, Vernescu had already earned his doctorate in applied mathematics and was working at the Mathematics Institute of the Romanian Academy, “the best place a mathematician could be in Romania,” he says.

But as he looked ahead at his life under the Communist regime, he saw only monotony. 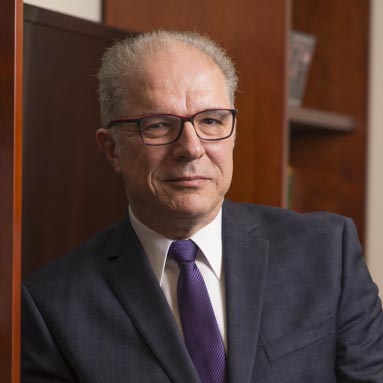 “I got my job at the best place I could get a job, and that was it,” he says. “I couldn’t move from that place because that was the best place, and traveling outside the country wasn’t really an option.”

Then in the summer of 1989 the Berlin Wall came down. The Romanian revolution began that winter and as the regime fell, Vernescu’s world was suddenly opened.

He applied for postdoctorate positions in Europe and the United States, landing at the University of Minnesota before arriving in Worcester.

Now, all these years later, he is in a position to help keep open the door to a future of opportunity for the next generation in his native country.

“I’m very happy and honored,” he says of his new board position.

Vernescu was named vice provost for research at WPI in 2016, after serving as interim for the previous two years. He co-founded the Center for Industrial Mathematics and Statistics in 1997, just six years after arriving in Worcester, and headed the department for a decade before being tapped by President Laurie Leshin to become vice provost.

He hadn’t planned on staying in America when he first arrived at the Institute for Mathematics and Its Applications at the University of Minnesota back in 1991.

“I had every intention of heading back to Romania. Interesting changes were happening in the country and society—it was an exciting time there,” he recalls.

But, his office mates in Minnesota were applying for positions in the United States, so, as he says, “when in Rome, you do as the Romans do.

“My plan was to do another couple years here and go back, but when I wrote back to my institute to apply for a two-year leave of absence, they fired me,” he says, smiling at the memory. “Now I’m an honorary member of the Institute.”

He arrived at WPI as an assistant professor and stayed.

“WPI is a great place to be, a great community, and I was always doing things that were keeping me very busy. I never felt I really needed anything else,” he says.

About three years ago Vernescu was asked by the Romanian-American Foundation to write a white paper on how research institutes are funded in the United States, and his presentation put him on the foundation’s radar.

Vernescu says he’s impatient with what he sees as the slow pace of change on every visit back.

“In a history timescale it’s probably not slow, but in a personal timescale it’s rather slow, and I’m a rather impatient person when it comes to this,” he says. “I want to see it happen faster.”

The foundation is filling this gap of trying to accelerate the transition to a sustainable market economy—trying to find a basis for developing some democratic NGOs and stimulate philanthropy and things that were not common in the communist past, Vernescu says.

It’s also working to counter the “brain drain” that happened after 1990, he says, which took people like him searching for opportunities outside of the country.

“One of the things that needs to happen there, because of that, is the pipeline of talent has to be very well taken care of,” he says.

So the foundation is trying to help schools redesign and update middle- and high school mathematics and physics curriculums, and recruit teachers for career development programs.

He’s also hoping to start an exchange program with WPI students spending a term in Romania and students there studying at one of WPI’s international programs.

The foundation is also funding the Romanian robotics team and competition, originally started in the Unites States by Dean Kamen ’73 as a way to make mathematics and sciences fun for students.

“WPI is a great place to be, a great community, and I was always doing things that were keeping me very busy. I never felt I really needed anything else.” -Bogdan Vernescu

Vernescu says when he was a student in Romania, everyone made essentially the same salary regardless of whether they were a doctor, a plumber, a teacher, or a laborer.

“There were not these added incentives that if you study this you will get more money. You might not like it, but you will be wealthy. So you do what you love to do, and if you love to do it, you do it better,” he said.

Kamen’s idea was to find something kids love to do to stimulate them to study mathematics, chemistry, physics, and give them role models, Vernescu says.

It’s something the old system of his youth did right, he says. “There were math competitions, Olympiads, and everyone was paying attention to who was winning at the Olympiads. All the parents wanted their kids to win at the Olympiads.

It was very well organized and well oiled. The competitors were the athletes,” he says.

The legacy of that kind of emphasis on mathematics is seen in faculty across the United States where there are approximately 500 Romanian-born professors teaching in mathematics departments, according to Vernescu.

He says the foundation is also funding the development of the rural economy by trying to promote the formation of associations of farmers, and helping get them access to markets where they can sell their products in a more organized way.

When Vernescu was a boy, his parents—who were civil engineers—assumed their son would follow in their footsteps.

When he went into mathematics instead, he remembers sensing his father’s unspoken disappointment.

“Many, many years later he was in my office, and he was looking around and looking at all my books,” Vernescu says with a smile. “And he said, ‘OK, I think you did well.’”