Poets in the Galleries

• In another collaboration between WPI and the Worcester Art Museum, a “Poets in the Galleries” event on November 21 features two local poets reading their ekphrastic poetry inspired by ancient statues from Southern Italy on display in the museum’s Jeppson Idea Lab.

Jim Cocola, assistant professor of literature, film, and media in WPI’s Department of Humanities and Arts, and Heather Treseler, assistant professor of English at Worcester State University, will read and discuss their ekphrastic poetry in the Museum Café from 6:30 to 7:45 pm. Admission to the WAM is always free to WPI students, staff, and faculty and is half price for everyone else on the third Thursday night of the month from 5 to 8 pm.

Invited to create the poems based on the Orantes statues, often a more somber statuary used in funeral processions, Cocola says despite his previous work with this type of poetry, this was a new experience. “This is the most sustained attempt at ekphrastic poetry I’ve ever made in my own right,” he says. “I’ve not attempted several poems on a single work of art before.”

The event continues the museum’s long history of inviting poets to read in the galleries, says Monica Elefterion, public relations and marketingcoordinator at the museum. And she hopes the readings will inspire even more such future events so visitors and poets will continue to be inspired by, and learn from, the works in the museum.

Ekphrastic poetry is an ancient form of poetry based on the poet’s response to artwork, typically paintings. Since ancient times, the poetry style has mixed visual art with the spoken word, offering the poet’s own, very individual, response to art. “There is a long tradition of ekphrastic poetry and a lot of it dates back to these objects,” Cocola says. “It is taking visual material and writing poetry in response to them.”

Previously Cocola’s ekphrastic poetry focused on two-dimensional images like a painting. Writing the poetry in response to the statues was unique. “The artifacts have a much more palpably human form,” he says, “and the impulse to address them directly is much stronger. They are a middle ground between a photograph and a human.” 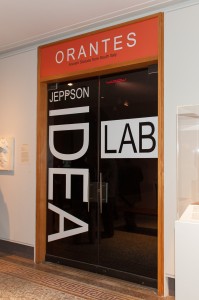 He also said his own southern Italian heritage influenced his response to the statues, giving him a reaction not only on a visual level, but also on the history behind the objects. Cocola visited the museum several times, often to see the statues and then to view other parts of the collection or to attend discussions about the statues. On his own, he reads about their history and the time they came from.

The poetry emerged from that mix. “I am not sure where the poems come from,” says Cocola. “It can be an encounter you have or something someone says and you are inspired to some sort of response. Then it starts to grow and take on a form.”

If listeners walk away from the “Poets in the Galleries” event with something, Cocola hopes that listening to the poems will help them “turn on their antennae,” he says. “Maybe they will have a sense of their own response to what we’ve written or the objects or other objects they might encounter elsewhere in the museum.”

If nothing else, the artwork and the poetry offer a nice entry point for learning about a new time and a different place. “It gives you an anchor,” Cocola says, noting that then interests can take you in another direction to explore.