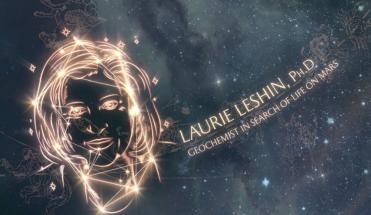 Since arriving at WPI three years ago, the community has come to know President Laurie Leshin as a STEM star. But for a few days this month, she’s a constellation.

Leshin was one of 12 women scientists and engineers uniquely honored by GE on Tuesday evening (Sept. 19), with the iconic stars on the ceiling of Grand Central Terminal in New York reconfigured into constellations depicting each of the honorees. The 750,000 people who pass through Grand Central Terminal daily are able to see and take photos of the three-day light show exhibit, which runs through today (Sept. 21).

"I'm so excited to see the creative way that our partners at GE are honoring women's leadership in STEM,” said Leshin. “To be included among the group being highlighted is truly a thrill for me."

You don't need to book a ticket to Grand Central to see GE's new exhibit—this video gets you up close and personal with each of the celebrated STEM stars. President Leshin's constellation starts to take shape at 1:50.

Before joining WPI, Leshin was the deputy director of NASA’s Exploration Systems Mission Directorate; the Dee and John Whiteman Dean’s Distinguished Professor of Geological Sciences at Arizona State University; and dean of the School of Science at Rensselaer Polytechnic Institute, where she also continued her work as a scientist for the Mars rover Curiosity mission.

Leshin is a recipient of NASA’s Outstanding Leadership and Distinguished Public Service Medals, and the Meteoritical Society’s Nier Prize. She has also served on the board of directors of Women in Aerospace, and on the Council of the American Geophysical Union.

In February, GE announced the Balance the Equation initiative to grow its workforce of professional women in science and engineering roles. In addition to its own goals, GE also wanted to publicly celebrate influential female scientists and engineers, and support organizations like the Society of Women Engineers, in an effort to encourage more young women to consider careers in STEM fields.

In April, WPI hosted GE’s Balance the Equation bus tour, which invited students to have casual, informative conversations with current GE employees, including WPI alumni, about what it’s like to be a woman working in STEM fields. The tour was part of an initiative in which the company has set a goal to hire 20,000 women in STEM roles by 2020 and obtain 50:50 representation for all technical entry-level programs.

GE believes the program will significantly increase the representation of women in its engineering, manufacturing, IT, and product management roles. The company believes that the commercial imperative, coupled with the ongoing challenges of recruiting and retaining top female talent in STEM jobs, means organizations must make real and continued investments in closing the gender gap.