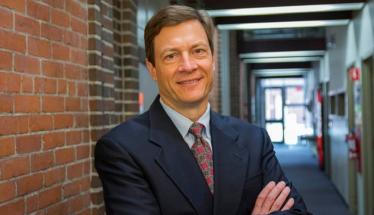 John McNeill, new head of WPI’s Department of Electrical and Computer Engineering (ECE), hopes to continue to make ECE a place where students and faculty are inspired to learn, teach, and collaborate. McNeill was appointed to lead the department during the summer.

A longtime faculty member who also served on the tenure committee when associate head of ECE, McNeill sees his new position as an opportunity to continue to foster the careers of young faculty. The result, he says, will enhance the department’s ability to engage students.

“What I’ve always enjoyed most about learning is making sense of the world," he says. "If a teacher cared about helping me to understand what I was interested in, that engagement offered an extra spark. As a teacher, I always thought if I could help someone else get there, that is a really good thing. Though I won’t be doing as much of that [teaching] directly, I will, hopefully, be creating an environment where professors in the department will be able to do that.”

Since joining the university in 1994, after seven years in the electronics industry, McNeill has watched WPI earn a higher profile for its research. It’s more important than ever to create an environment that “helps our students benefit from collaborating with world-class researchers,” he says.

Research itself has become inherently more collaborative over the years, says McNeill, “as we explore more real-world applications of technology.”

He hopes to continue to encourage more collaboration within the department, in part by matching established faculty members with new hires. He’ll also oversee the continuation of a reorganization of the department’s research, from seven or eight separate areas to a model where everything falls under three major topics: eHealth, Smart World, and security.

"If a teacher cared about helping me to understand what I was interested in, that engagement offered an extra spark. As a teacher, I always thought if I could help someone else get there, that is a really good thing...I will, hopefully, be creating an environment where professors in the department will be able to do that." -John McNeill

McNeill himself has been involved in award-winning research. In collaboration with Analog Devices researchers Michael Coln and Brian Larivee, McNeill won the Best Paper award at the 2005 International Solid State Circuits conference, the IEEE’s flagship conference for advances in integrated circuit design. He recently completed a year as a visiting researcher at the University of Massachusetts Medical School and as a member of a team developing a wearable wireless sensor for prevention of bedsores in convalescing patients in hospitals, as well as for those in home care and long-term care facilities or in wheelchairs. In addition to his work in biomedical sensing, McNeill’s research interests include jitter (noise) in integrated oscillators and digitally assisted calibration of analog-to-digital converters used in low-power sensor systems.

He expects to be able to continue most of his research activities as ECE department head.  “[Engineering Dean] Wole Soboyejo has been very strongly supportive of department heads keeping their research going,” says McNeill.

McNeill’s work as an educator has been recognized several times over the years. In 1999 he received the WPI Board of Trustees’ Award for Outstanding Teaching, and he has won the Eta Kappa Nu Outstanding Electrical Engineering Professor Award three times (in 2000, 2008, and 2013). In 1995 he received the Joseph S. Satin Distinguished Fellowship in Electrical Engineering at WPI. In 2007 he was one of the two inaugural recipients of WPI’s Chairman’s Exemplary Faculty Prize, which honors outstanding faculty members for excellence “in all relevant areas of faculty performance.”

Because he has always enjoyed teaching, McNeill says he never had an ambition to become a department head. But, when the opportunity arose, he was encouraged by other department heads who explained the position would give him the chance to influence young faculty even more than previously, something he has particularly liked to do.

He says he doesn’t have plans to make any major changes in the department, just build on the positive momentum that is already there for the students and faculty, and “make it a place where people can thrive in their careers.”