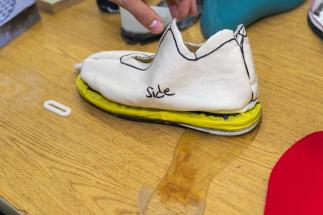 A team of student engineers at Worcester Polytechnic Institute (WPI) has developed a working prototype of a new type of sports shoe sole designed to reduce the incidence of non-contact knee and ankle injuries in organized sports. The shoe is a response to the large number of ankle and knee injuries—notably to the knee’s anterior cruciate ligament (ACL)—that plague amateur and professional athletes.

The WPI team is building, testing, and evaluating preliminary prototypes of the shoe in October and November. They hope to produce about 10 pairs in campus labs by January for further testing on the court. A larger trial production run is expected early in 2019.

According to the Journal of Athletic Training, the knee joint is the “…second most commonly injured body site after the ankle and the leading cause of sports-related injuries,” with more than 43,000 injuries occurring in high school athletes each year in a recent five-year period.

Researchers say the most common causes for ACL injury are landing from a jump, decelerating, and planting and pivoting off the foot.

The WPI shoe works by limiting loads to the ankle and knee, where many injuries occur. The key design element is a set of “goat’s-head springs”—tiny flexible polymer pieces whose name is a reference to WPI’s mascot. The springs are curled like goat’s horns, wrapping around posts that restrain, or localize, their deformation. The shoe recovers its initial configuration between steps, and the user may not notice that the shoe has responded to a potentially dangerous situation.

“The idea is that work from the effort exerted when someone is running and cutting would be absorbed by deforming the springs instead of tearing an ACL or spraining an ankle,” said Christopher Brown, professor of mechanical engineering, who is guiding the student team.

Alex Alvarez ’19 explains the mechanics of their shoe design.

Brown has long been interested in preventing sports injuries. An All-American skier as an undergraduate at the University of Vermont in the early 1970s, he went on to do his graduate studies there. He worked with an orthopedics research group, who found an alarming increase in ACL injuries among skiers. In 1983, they presented a study on a new skiing-specific mechanism for ACL injuries to the International Society for Skiing Safety.

To develop early prototypes, the WPI team used a band saw to slice the sole horizontally, and install a low-friction interface where the load transfer is controlled by the goat’s head springs.

The shoe design, for which WPI has received an initial U.S. patent, has captured the attention of longtime entrepreneur Ed Cowle, an angel investor and CEO of New York-based Sports Engineering, Inc. (SEI).

SEI has invested in excess of $400,000 in the shoe project, which is helping support research by undergraduate and graduate students and development of a prototype. SEI has an exclusive license to the patent as well as future intellectual property from WPI. WPI holds equity and will receive royalties on the shoe.

Cowle believes the invention addresses a gap within the shoe industry. “There’s not a lot of technical innovation in the athletic footwear space,” he said. “This disruptive technology fills a specific need, given the increasing number of ankle and knee injuries in sports.”

The basic mechanism and components can be adapted to shoes specialized for many different sports. Additionally, this platform technology could potentially be added to footwear used in hiking, rehabilitation, and other activities.

She said the other members of her project team, Michael Doyle ’12 and Nicholas Workman ’12, brought various strengths to the effort. “Without this diverse group we would not have been as successful in developing a solution that could be patented and further developed,” said Shelsky, who now works as a senior manufacturing engineer for a medical technology company.

Todd Keiller, director of Intellectual Property and Innovation at WPI, said he is impressed with the project’s business scope and health benefits. “This is a student project that has attracted angel funding, which is bridging the development gap between what a shoe company is willing to invest in versus the stage of our original prototype,” he said. “It will be great to see a student project turn into a product on the market that will hopefully protect many athletes.”

Preventing Injuries Is Their Sole Objective

Learn more about the WPI student team working on the project in this profile in the Daily Herd.