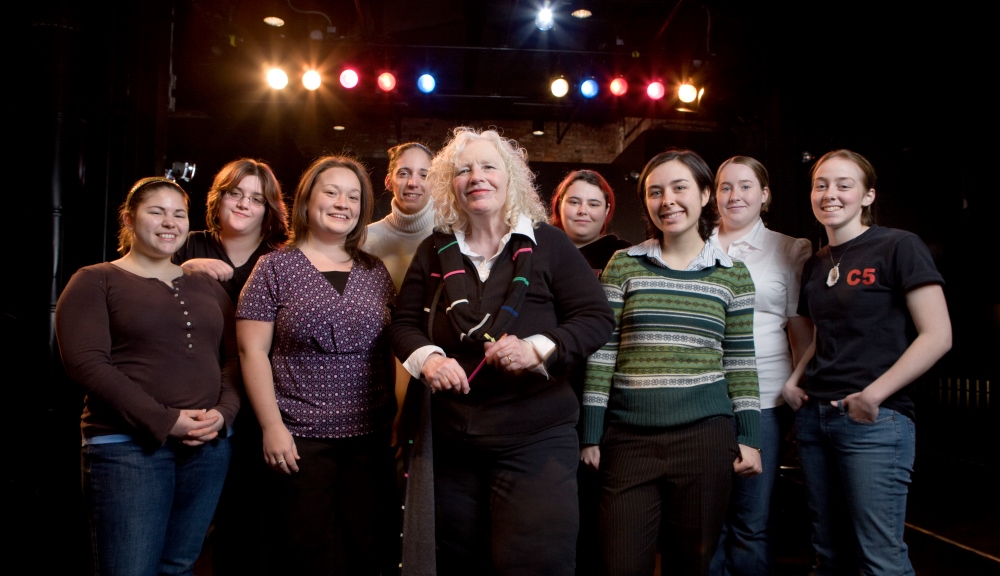 Recently retired after a 37-year career as director of WPI’s innovative drama and theatre programs, Vick received the 2018 Leonidas A. Nickole Award

Susan Vick, who recently retired after 37 years as director of the drama and theatre programs at Worcester Polytechnic Institute (WPI), received the 2018 Leonidas A. Nickole Award from the New England Theatre Conference at the organization’s annual Excellence in Theatre Awards program yesterday. The award is given for outstanding teaching in the field of drama.

“For nearly four decades, Susan built a remarkable theatre program, unusual in its scope and intensity of student involvement for a university known primarily for its programs in science and engineering,” said Kristin Boudreau, Paris Fletcher Distinguished Professor of Humanities and head of WPI’s Department of Humanities and Arts. “She has overseen a learning environment that gave maximum autonomy to students, inspired students who are typically not drama majors to invest intense amounts of time and energy into their studies, and helped students work quickly to stage high-quality productions.

“Her remarkable achievements, and the immense loyalty so many WPI alumni feel for the teacher who ignited their love of the stage, are inspiring, and the incredible foundation she built at WPI will stand our theatre program in good stead for generations to come.”

“Theatre is the world where everyone in it can learn by opening our minds to hear the truth about what we can say, about who we can be, about who we can love, about what we can do in this world,” Vick said in her acceptance speech. “Teaching the amazing undergraduates at WPI keeps me educated. I gratefully accept this award and acknowledge the many at WPI who have educated me and with whom I share this award.”

Vick joined the WPI faculty in 1981 after having achieved early success in the theatre. She once recalled that she produced her first play at the age of 5 at her home in the Blue Ridge Mountains of North Carolina. “I was hell-bent for it,” she said in a 2010 profile on the WPI website. “But the idea of doing theatre for a living was very remote.”

A Place at the Table

She graduated from Catawba College and toured with the National Children’s Theatre before becoming the first woman to earn an MFA in directing from Southern Methodist University. She held a number of academic posts, including serving as acting director of theatre at Bowdoin College, before returning to school to become the first woman to earn a PhD in theatre at the University of Illinois. A number of acting awards, more than 20 directing milestones, and a budding career as a playwright followed.

Vick, who retired as professor of drama/theatre and director of theatre, said the faculty position at WPI caught her attention because it required directing two theatre productions a year (“It’s very difficult to get teaching jobs where you also direct,” she said) and because WPI’s project-based approach to education offered the opportunity to connect with students across the academic spectrum, and not just in a theater program. “There’s always that person in an area you wouldn’t expect who wants to participate,” she said. “Here it’s legitimate. You can do it. Everybody has a place at our table.”

While theatre had long had a presence in student life at WPI, it wasn’t until Vick’s arrival that it blossomed into a cultural phenomenon. She began with the academic side, creating classes in drama and stagecraft, but also finding ways to lead many

students deeper into the world of the dramatic arts as advisor to numerous undergraduate projects and by working closely with students who, inspired by her teaching, chose to major in theatre.

She also found ways to engage WPI’s students’ technical and engineering expertise through the theatre productions she oversaw, which for many years involved designing and constructing elaborate stages and audience seating areas to transform the cavernous interior of the Alden Memorial great hall into a more intimate theatre venue. In 1996 she launched a formal Theatre and Technology Program to prepare students to pursue cutting-edge theatrical innovation and to bring new technologies, including virtual reality, to WPI’s own productions.

“As a professor, she continuously believed in a hands-on education through trial-and-error and through self-reflection, hence the totally unique theatre program she created at WPI,” said Despoina Giapoudzi ’16, who earned BS degrees at WPI in architectural engineering and humanities and arts and is currently a visiting instructor of drama at the university while also pursuing an MA in performance design and practice at the University of the Arts London. “It is a program unlike any other I have seen in the United States or Europe, and it makes its alumni stand out from the crowd, whether in a professional or academic setting.”

Early on, Vick was approached by students who were eager to try their hand at writing for the stage. Defying skeptics who said that science and engineering students couldn’t write great plays, she encouraged them, and in 1982 she founded New Voices,

an annual festival of original plays written by students and other members of the WPI community, to showcase their work. New Voices is now the longest running university new plays festival in America.

In 2005 Vick realized her dream of having a dedicated theatre venue on campus when the Little Theatre opened in the lower level of Sanford Riley Hall. Created with a $400,000 grant from the George I. Alden Trust, the 100-seat theatre has a permanent lighting grid and sound system, a control booth, and a greenroom.

Vick’s achievements have earned her numerous honors. In 1997 she became the first woman to win the WPI Board of Trustees’ Award for Outstanding Teaching. In 2010 she was inducted into the Catawba College Blue Masque Hall of Fame. Other honors include receiving the Alpha Phi Omega Service to Students Award and being named a semi-finalist in the CBS/FDG New Play Competition. She has been recognized twice by “Who’s Who in Entertainment” and is included in “Who’s Who in America, Millennium Edition.”

In addition to the numerous plays directed at WPI, Vick has staged productions in Boston, Northampton, and Amherst, and brought WPI productions to the Edinburgh International Festival in Scotland. She has written plays that have been produced off-Broadway and in regional, educational, and international venues. She is a published poet and has adapted several of Shakespeare’s plays for children’s theatre. She has also served as editor for Playwrights Press, as well as in other playwriting venues, and has been a contributor to “theatre in review” in Theatre Journal.