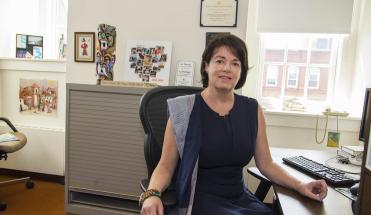 MBA program director Fabienne Miller and professor of practice Jerry Schaufeld have wrapped up another successful Global Business Experience course. Twelve graduate students explored business environments, history, and cultures, especially as they relate to innovation in France and Switzerland. A 10-day trip to Europe with final presentations back here in the U.S. after their return last month rounded out the learning.

Miller mainly oversaw the French part of the course, as it’s her home country, with Schaufeld teaching students on Switzerland’s business environment and culture. 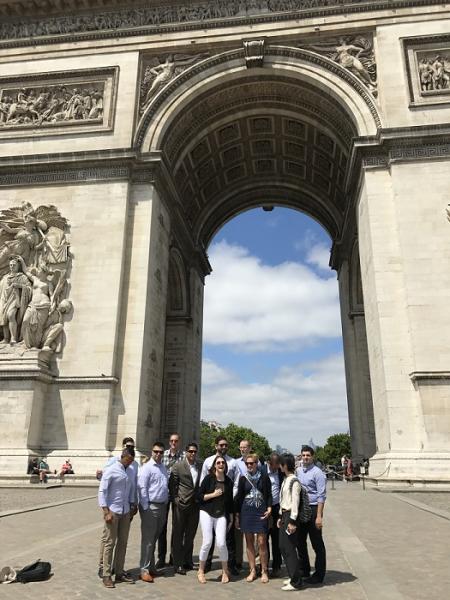 The student group at the Arc de Triomphe.

It was new territory for WPI.

In past years, says Miller, students in this course studied and visited Israel and China. This year was the first time the course has focused on Europe. And with one country a member of the European Union (EU) and one a non-member (Switzerland), it made for more interesting comparisons and contrasts, she says.

One of the areas of consideration, says Miller, is how much of an impact education has in each country and in the U.S. “We capture the social, economic, and educational dimension,” she says. “We’re trying to understand what makes people tick and how they do business.”

Before the trip got under way at the end of June, students covered background material in class—such as relevant current events—and heard from guest speakers. “We prepared the students, giving the context of EU as an economic entity in the first part of the course and discussing how France and Switzerland fit in,” says Miller.

Once overseas, the class met with business leaders in various industries in France and Switzerland, including government, academics, and private business. The group also visited business incubators and business schools.

Cultural differences were a part of the course’s considerations. Miller says that one of the guest speakers used the example of how French business people would discuss business over dinner, with wine. But in another country, those present would drink milk at such a meeting.

“What hinders or boosts innovation?” was a main topic of exploration, she says, with students analyzing the question, “If you want to innovate, what is good?” And, "What factors in France, Switzerland, and the U.S. make an idea more likely to be successful?"

An emerging theme was the European businessperson’s fear of failure, as compared with its American counterparts. There is more of a pursuit of excellence in the EU, students found, which makes the French and Swiss more likely to conduct due diligence with things like business plans, says Miller, but perhaps less likely to launch a company with a high level of risk attached, as compared with one in the U.S. 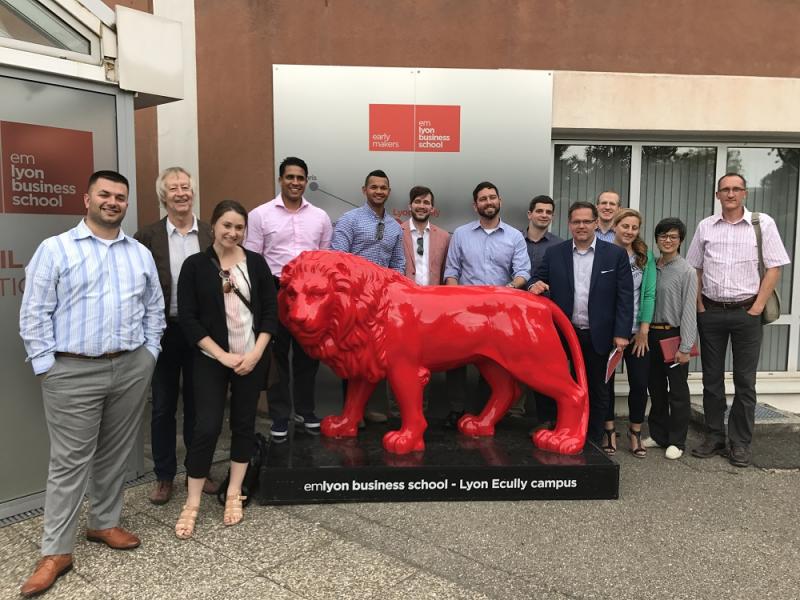 The group at the EMLyon Business School.

“It’s pretty much a black mark,” Miller says of the notion of failure in these countries. “It makes people more hesitant. If they do [take a business risk or invest in an idea], they will be very well prepared,” though the mindset around risk-taking seems to be changing with the younger generation there.

Another theme to develop was the French and Swiss social consciousness and focus on quality of life as it relates to business, she pointed out. Environmental and other concerns appear to be more paramount there than in the U.S.

Where the purpose of the course is to broaden MBA students’ perspectives, there were some nuances that made for interesting considerations, Miller says, such as when one dimension shone through as a strength in one country, and a different but not necessarily less-potent dimension emerged in another.

Guest speakers helped further extend students’ perspectives before and after the trip. The sessions were not lectures, Miller explains, but time set aside to propose different perspectives and discuss the guest speakers’ experiences in Europe and how they compare with experiences in the U.S. During the trip, students also met with WPI alumni who shared their experiences living and working in France.

Next year’s course will take the group back to Israel. But no matter the country, innovation and entrepreneurship are a universal language.