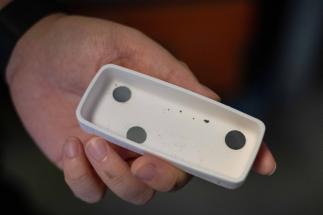 Worcester Polytechnic Institute (WPI) researcher Yu Zhong has been awarded a U.S. Department of Energy (DOE) grant to lead a $1,250,758 cost-sharing project that will design better-performing materials for devices that split water molecules to produce clean hydrogen fuel. Expanded production of hydrogen, which is currently used mostly in industrial applications, is of significant interest as nations worldwide grapple with climate change and seek ways to reduce carbon emissions from fossil fuels.

Zhong, principal investigator (PI) on the two-year project and an associate professor in the Department of Mechanical and Materials Engineering, will oversee development of chromium-resistant materials for oxygen electrodes that are used in Solid Oxide Electrolysis Cells (SOEC). SOECs, which are powered by electricity and stacked into large configurations, to break water into oxygen and hydrogen. 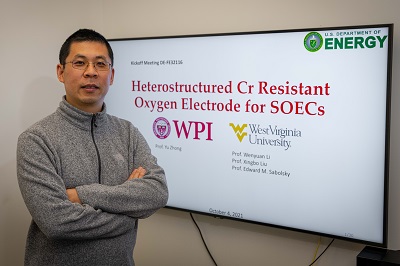 Although fossil fuels such as natural gas are used to generate most of the hydrogen produced worldwide, improved SOECs have the potential to expand hydrogen production without carbon emissions by using electricity from renewable energy sources, such as solar and wind power, to produce hydrogen that can be stored for later use.

“The performance of oxygen electrodes in SOECs drops over time mainly as the oxygen electrodes, which are made of ceramic materials, are exposed to chromium impurities in air,” said Zhong, whose research focuses on integrated computational materials engineering (ICME). “Better electrode materials that resist chromium poisoning would lead to SOECs that could operate longer without a significant drop in performance, and that would make SOECs a more cost-effective way to produce hydrogen.”

The researchers will use computational modeling and laboratory experiments to develop optimal materials for oxygen electrodes. The project is one of 12 funded with $16.5 million in federal funds to improve the production, transport, storage, and use of hydrogen to reduce carbon emissions. The DOE will provide $999,973 for Zhong’s project; the universities will fund the remaining $250,785.

At the end of the project, the researchers will recommend materials for testing by Saint-Gobain Research North America in Northborough, Mass,. an industry partner.

“Hydrogen is the cleanest fuel, and in the future, the world will use more hydrogen,” Zhong said. “That makes our task to improve the performance of SOECs urgent, so that these devices can last for many years.”