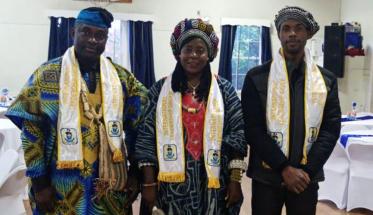 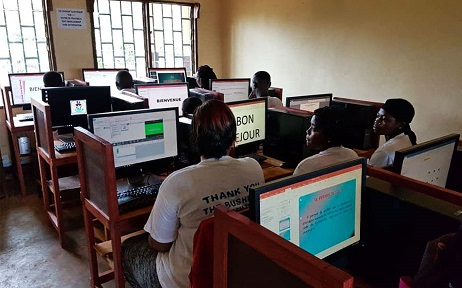 If there’s one thing that stands out about Albert Nana Beka ’20 it’s that he values the place and people that influenced him so much that he was driven to help bring technology to both.

Nana Beka credits some of the skills he used in his Interactive Qualifying Project (IQP) in 2016 at WICN radio in Worcester for helping him and others create a multimedia center with 60 computers in Bazou, Cameroon, a nation in Central Africa.

“I started using the same analytics approach I did in my IQP to resolve the situation in my village,” Nana Beka says, referring to Bazou’s lack of technology. During his IQP, he learned ways to prioritize and process data. This came in handy when the nonprofit group Bazou New England, of which Nana Beka is a founding member, had to plan and prioritize how to help the village.

Nana Beka graduated with a bachelor’s and master’s in mechanical engineering in December 2019 and works at Partners Healthcare in Massachusetts as a Linux System engineer. During his time at WPI, he was one of two founders of the nonprofit group Bazou New England. Nana Beka said it was important to keep members of the group united around projects to benefit Bazou so that they didn’t forget about the needs of their home village.

Spend your summer with a research team working to solve some of the most urgent problems facing our society. An Undergraduate Research Experience (REU) at WPI lets you spend 10 weeks at a premier technological university in the heart of New England contributing to cutting-edge science and engineering research projects.

WPI’s project-based curriculum helped Nana Beka by teaching him how to plan and organize when it came to project work, such as the development of the multimedia center. Many elements were involved, including acquiring computers, shipping them to Bazou, getting the software needed, and ensuring sufficient electricity to cover daily activities there. The few schools that exist in Bazou don’t have the financial means to create and maintain a tech center, and this multimedia center is the only one of its kind in the Ouest region of Cameroon, where Bazou is located, Nana Beka says.

“We created the computer science center for the young people in Bazou to offer them a place to go and feel connected to the world, so that they could conduct research for their education or sign up for free classes,” Nana Beka says. “This will definitely change their lives. The children and women for the first time in their life in my village will have free access to computers. Just to see the smiles on their faces filled our hearts with joy.”