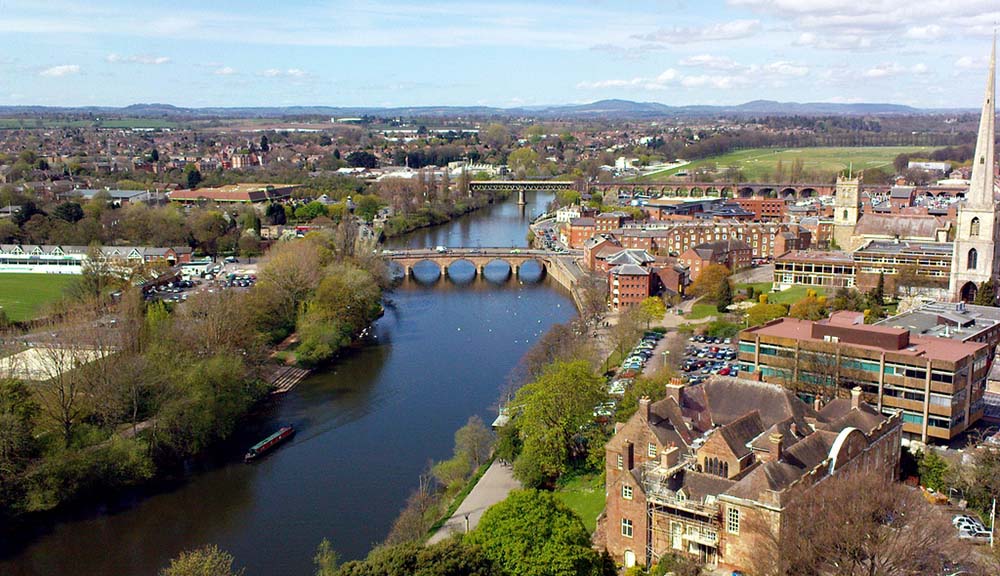 Professor Rob Krueger’s work has taken him all over the globe, but a recent stop in the U.K. saw him accept a Green Apple Environmental Award for his work in Worcester, England, during a ceremony held in British Parliament for an Interactive Qualifying Project (IQP) that was done at the University of Worcester.

The IQP and subsequent recognition for WPI’s contribution came after years of interaction between the two universities and, prior to that, a “sister city” relationship between the Central Mass. community and its English counterpart.

Krueger, a social science professor and human geographer, has worked in North America, Europe, Asia, and Africa on issues of economic development and institutional change. He was in Worcester, England, for two months last year overseeing the partnership between WPI and the University of Worcester as program director for WPI’s Worcester, England Project Center. He also has developed projects there over the last four years.

WPI’s connection with the University of Worcester began in 2013, but Krueger points out that Worcester, Mass., started developing a relationship with Worcester, England decades ago.

Former City Councilor Dennis Irish was the force behind connecting the two cities in the late 1990s through a range of cultural exchange activities and projects, according to Krueger. “City officials were the motivators behind early engagements,” he says.

That connection was reinforced on Nov. 12 during a ceremony on the veranda at the Houses of Parliament at the Palace of Westminster that recognized the cities’ ties and rich history. During that program, Krueger accepted the silver Green Apple Award on behalf of WPI for its work with boiler manufacturer Worcester Bosch and the University of Worcester in environmental best practices. Only a few days earlier, WPI President Laurie Leshin spoke to graduates at the University of Worcester and received an honorary degree. “It was recognition of the partnership,” Krueger says. “Professor Dominic Golding started the project center and I took it over—he now runs the London Project Center. There’s a strong connection between the universities.”

Golding says the idea for a Worcester, UK, project center hatched when he was approached in 2013 by Lord Richard Faulkner, Baron of Worcester. Faulkner was serving on the board of the Science Museum, London, and had heard about WPI’s London projects. Faulkner asked Golding if WPI would consider doing similar projects in Worcester. Shortly thereafter, Krueger traveled from London to the University of Worcester to meet with a team that included Katy Boom, director of sustainability. The first IQPs in Worcester were conducted in the summer of 2014, Golding said, and the center has grown every year.

“I love going to Worcester,” Golding said. “It is a different experience than going to London. It is a small market town, different than a big city. Some students can go away and not feel overwhelmed like in a big city.”

“Katy knows the building superintendent," he says, "so we had a tour to learn about the infrastructure of the building. How do you maintain a building as old as the Houses of Parliament, which was built in 1016 and rebuilt in 1840?”

For the award-winning IQP, WPI partnered with Worcester Bosch, which had donated several boilers and smart meters used in student housing at the University of Worcester. The WPI students examined heat usage and held focus groups on how the data correlated with behavior,” he says. “The overarching goal was to reduce fuel use and lower student costs. There is a high rate of fuel poverty in the U.K. Behavioral changes and using smart boilers can help.”

"The IQP is an overall great experience. It is a once-in-a-lifetime thing and an awesome experience. It solidified that we did something that pushed the boundaries. It's really cool." -Steven McAteer '19

“They essentially found having the smart boilers didn’t make any difference with heating usage or the amount of money they were spending,” Krueger says. “Behavioral issues overrode the program settings. The data was so sophisticated it could tell if people’s windows were open or if they leave the boilers on during the day when they were in class.”

After tweaking the technology, Krueger says he is hopeful the University of Worcester will talk with students about how to utilize their apartment heat.

Steven McAteer '19, WPI computer science major, was one of four students working on the project. The award is an honor, he says. “The IQP is an overall great experience. It is a once-in-a-lifetime thing and an awesome experience. It solidified that we did something that pushed the boundaries. It's really cool."