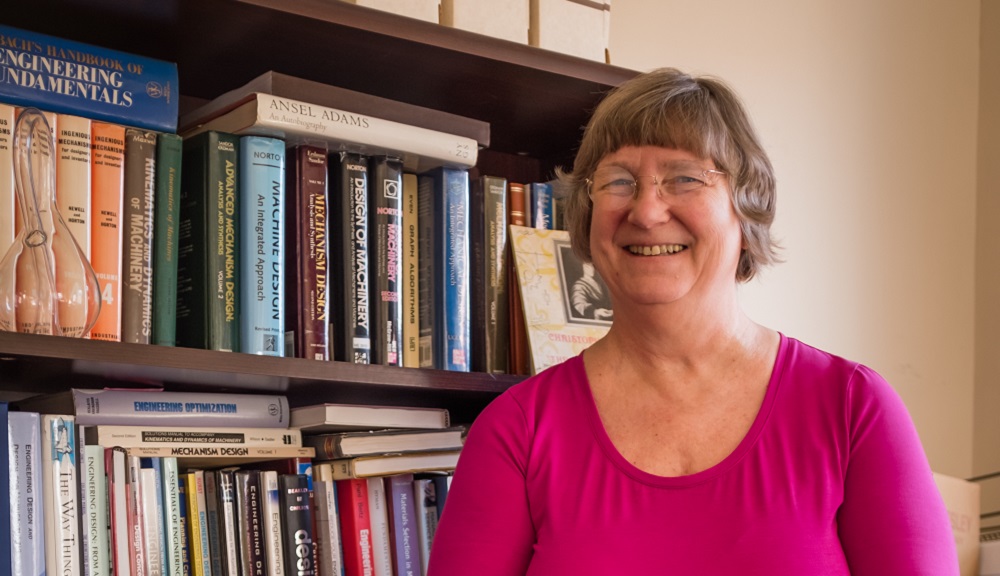 She came to WPI to study science and engineering, earning BS, MS, and PhD, and staying on as a professor

When associate professor of mechanical engineering Holly Keyes Ault arrived on campus in the fall of 1970, she was a kid who loved science, particularly computer science, and looked forward to classes where she could explore her passion.

On the advice of her high school guidance counselor, she'd applied to WPI; she went on to earn her BS in 1974 and her MS in 1983. Five years later she received the first PhD in mechanical engineering awarded to a woman at WPI—although she (literally) was followed across the stage by Lauren Baker (BS '82, MS '85), who also earned a PhD in ME that day. Ault has been a faculty member here since 1989.

“Lots of all-male schools were starting to accept women at that time,” Ault says, so she didn’t feel any particular pressure of being on the lower side of what she recalls as a 32.8-to-1 male-to-female ratio. “It didn’t bother me,” she says.

But the women, 25 total in her class, did stick together, especially as they all lived on one half of the first floor of Sanford Riley Hall. And they remain connected to this day. “I don’t feel like I personally blazed a trail,” she says, “but as a group we did. There was a lot of support among ourselves and from the faculty.”

Her hometown high school (in Amherst) was one of only three in Massachusetts with access to computers, and Ault became fluent in FORTRAN and BASIC before she graduated. A stubborn streak changed the course of her studies—resentful that WPI wouldn’t excuse her from a basic computer class despite her advanced skills, she decided not to major in math/computer science. After some “floating around” she says working with Professor Al Scala opened her eyes to the delights of chemistry, in which she earned her BS.

But Ault’s education didn’t stop there. Upon graduation, she says she had a plan. “My goals were to graduate, get married, and get a job,” she says. “I had a perfect GPA, so I wasn’t worried about getting a job.” She married Bill Ault ’73 ‘79 (“an upperclassman!” she jokes) and started working at Norton Company (now Saint-Gobain). With so few women in engineering, Norton, she says, helped her move into manufacturing engineering despite her lack of experience. The move changed her path. “This engineering stuff was a blast,” she says. “I loved it.”

Back to WPI to enroll in a mechanical engineering master’s degree program, Ault’s progress was interrupted by a relocation to St. Louis before a return to Worcester allowed her to start up again—years later and with a new thesis with advisors Ken Scott and Bob Norton. From there, the support of faculty helped her land in all the right places. Don Zwiep arranged for her to TA with Scott in advanced CAD. “It was the perfect niche for me,” she says. “It had my love for computer science and my engineering.”

“I came [to WPI] because I wanted to study science and engineering. I came back because I loved the support I got here. It was home to me by that time.” -Holly Keyes Ault

Forging Ahead for a PhD

“I didn’t think of going anywhere else for my PhD,” says Ault. After earning her MS in ’83, her trio of advisors convinced her that academia was the place for her. “I came here because I wanted to study science and engineering. I came back because I loved the support I got here. It was home to me by that time.”

Faculty supported her throughout. “My PhD advisor, Allen Hoffman, was a mentor and colleague, both during the PhD process and throughout my WPI career,” says Ault. “Al provided me with a dissertation topic that involved challenging, original research; the research did not take the path that we originally expected, but he guided me through the work to a successful outcome and we published the results in papers that were often cited for many years.”

As a Woman in Industry

For 20 years, Ault has been advising IQP teams in the Global Projects Program. She was center director for Melbourne for 12 years and this year became co-director of the Copenhagen Project Center, where she will spend D-Term. The next academic year will find her in Copenhagen in A-Term and in Armenia in D-Term.

Home at WPI/WPI at Home

In a fitting twist, Holly and Bill Ault live in the house WPI’s founder John Boynton built in the 1830s. When Bill was called to be the pastor of the First Church of Templeton, they were surprised at the parsonage’s heritage. “When they said this is the house of John Boynton, our jaws dropped,” she says. “It was fate that we should be here in that house.”

“I do not view the PhD as a particularly extraordinary achievement,” says Ault. “It was a lot of hard work, but I would say that that perseverance as much as intellect allowed me to complete the degree. You don’t have to be a brainiac to get a PhD, but you DO have to work your #ss off!”