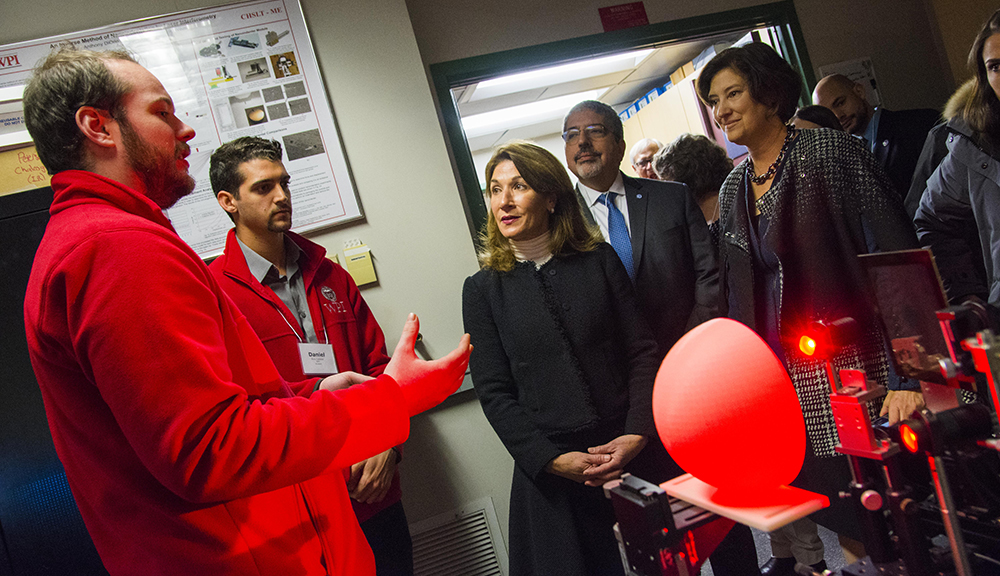 With a 42.5 percent increase in external research funds on hand since FY 2016, the university is advancing its strategic goal of elevating the research enterprise

WPI achieved a new research milestone in Fiscal Year 2018, as the funds received from external agencies and organizations to support research hit $33 million. That figure has grown 42.5 percent over the past three fiscal years. The total includes $30.5 million in funds for work at WPI (a new record and a 44.7 percent increase over the past three years) and $2.4 million in subawards to research teams at other universities and organizations with which WPI faculty collaborate.

Bogdan Vernescu, vice provost for research, attributes the continuing growth in WPI’s research funding to a number of factors, some of which are direct outgrowths of Elevate Impact, the university’s three-year strategic plan. For example, as an initiative of the plan, the university established the Research Solutions Institute (RSI) and hired its first staff members during FY 2018. RSI was created to enhance the university’s success rate in winning research awards, particularly larger, multidisciplinary awards, by serving as a resource to the faculty.

“RSI works with faculty in a number of ways,” Vernescu says. “For example, they identify new funding opportunities, and make the faculty aware of them. In conjunction with the Office of Sponsored Programs, they offer workshops that help our faculty find funding sources and develop successful proposals (particularly large, complex proposals) for various funding initiatives. They also provide assistance in developing strategies for proposals, and will review draft proposals to help improve their odds of success.”

Within RSI, Michael Wright, research opportunity development lead, works with researchers across the university, with a particular focus on helping multidisciplinary teams of faculty pursue larger awards, including highly competitive center awards from the NSF, the National Institutes of Health, and other federal agencies. Ellen Piccioli, director of manufacturing innovation, focuses on opportunities presented by WPI’s membership in eight of the 14 national Manufacturing USA institutes. Through FY 2018, 17 funding proposals were submitted through the institutes in collaboration with industry partners. Of those, seven, valued at more than $5 million, were awarded.

The most substantial of these was a $4 million award from the Massachusetts Technology Collaborative (MTC) through its Massachusetts Manufacturing Innovation Initiative (M2I2). The award, to WPI and Quinsigamond Community College, will fund a Lab for Education & Application Prototypes (LEAP), a facility for education, research, and project work related to integrated photonics. The principal investigator for that award is Doug Petkie, head of the Department of Physics.

The new facility, which will begin taking shape soon in the Gateway II building at 50 Prescott Street, is part of WPI’s membership in the AIM Photonics Institute. The AIM Photonics LEAP will adjoin PracticePoint, a membership-based research, development, and commercialization alliance led by Gregory Fischer, associate professor of mechanical engineering and robotics engineering. Aimed at advancing healthcare technologies and medical cyber-physical systems, PracticePoint was launched in FY 2017 with a $5 million award from the MTC.

Other Manufacturing USA awards will fund research by WPI faculty members associated with the Advanced Regenerative Medicine Manufacturing Institute (ARMI), or BioFabUSA; the Lightweight Innovations for Tomorrow (LIFT) institute; and the National Institute for Innovation in Manufacturing Biopharmaceuticals (NIMBL). “These efforts are meant to strengthen WPI’s leadership in 21st century manufacturing and support the development of a manufacturing hub in central Massachusetts,” Vernescu says.

He notes that under the strategic plan, he and his team have put a special emphasis on raising the visibility of the university and its researchers in Washington, D.C., home to major federal funding agencies as well as the legislative bodies that set federal research budgets and establish funding priorities. “During the past fiscal year, we supported more than 30 faculty members who traveled to funding agencies in Washington and elsewhere,” Vernescu says. “They met with program officers at funding agencies, key individuals at federal agencies, legislators, and others who have the wherewithal to influence funding decisions and provide guidance on how to navigate the federal funding landscape. These visits, which will continue in FY 2019, will pay dividends down the road.” 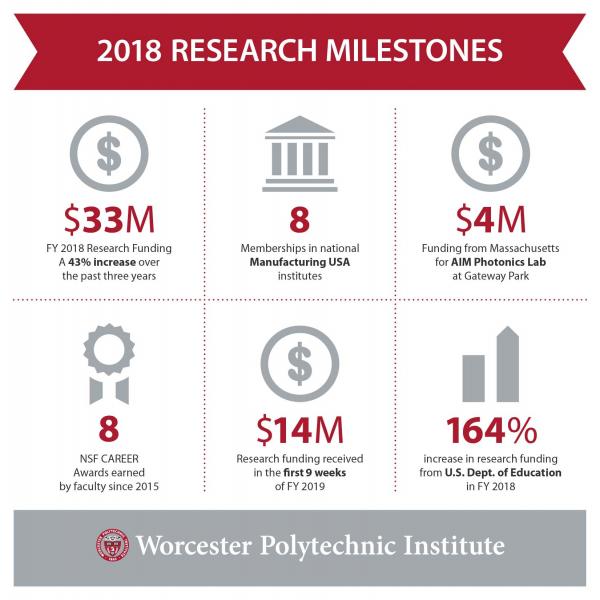 Just as important, Vernescu says, are efforts to build relationships and partnerships that can expand our research horizons and at the same time increasing our success with our traditional

funding sources. As an example, in February, WPI hosted the Soldier Science Research Symposium, where researchers from the U.S. Army Natick Soldier Research, Development, and Engineering Center (NSRDEC) and WPI discussed potential research collaborations between the two organizations. As part of a growing collaboration between the two entities, WPI and NSRDEC in 2016 established a master Cooperative Research and Development Agreement (CRADA) to allow the exchange of information and facilitate collaborations.

Visits by federal funding organizations are in the planning stages, and WPI has been welcoming a number of corporate research organizations that are interested in learning more about the interests and capabilities of WPI’s researchers. “WPI has a long and commendable history of applied research,” Vernescu says, “and our faculty and students have worked on countless projects over the years that have solved problems for companies and helped increase their competitiveness. Increasingly, we are hearing from major corporations that are anxious to come to campus to forge research partnerships to seek strategically important solutions and innovations.”

Also helping set the stage for future awards, the offices of the Dean of Engineering and the Dean of Arts and Sciences this year inaugurated competitive seed-funding programs that support multidisciplinary research teams with promising new ideas. These small, one-year grants are designed to help the researchers conduct preliminary studies and prototyping work, and to gather the kind of data that will help them write more compelling proposals for external grants to sustain their research.

A Year of Notable Successes

While FY 2018 was notable for activities aimed at setting the stage for future growth in WPI’s research enterprise, it was also a year for marking important successes, Vernescu notes. “We continued to see a steady flow of awards from the NIH and NSF, including three new NSF CAREER Awards, for Cagdas Onal in Mechanical Engineering, Craig Shue in Computer Science, and Lyubov Titova in Physics, which brought our total to eight since 2015. We saw a 50 percent increase in funding from the Department of Defense, to $5 million, which included another $2.75 million for work on nanomaterials processing in WPI’s Materials Science and Engineering Program. Funding from the Department of Education rose 165 percent, to $2.2 million, led by several successful proposals by researchers in our Learning Sciences and Technologies Program. These are achievements worth celebrating.”

In this context, Vernescu points to the crucial role that the Office of Sponsored Programs has continued to play in supporting WPI’s researchers throughout the life cycle of a grant. “OSP has been critical in providing assistance on proposal development and ensuring smooth and timely submission,” he says, “as well as negotiating favorable award terms and resolving complex compliance issues.”

As WPI’s Office of Intellectual Property and Innovation continues to work with WPI researchers to patent their innovations and, more important, to license that intellectual property to companies, particularly new start-ups, a new phenomenon has emerged: start-ups supporting research at WPI related to the innovations they have licensed.

An Exciting New Trend to Watch

Vernescu says three start-ups funded research in FY 2018: a Silicon Valley company supporting continuing work by mechanical engineering professor Balaji Panchapakesan on a promising cancer detection technology; a company supporting ongoing development of a prototype of an athletic shoe innovation created by mechanical engineering professor Chris Brown and several undergraduates; and Battery Resourcers, a battery recycling start-up founded by professors Yan Wang and Diran Apelian and led by former postdoctoral researcher Eric Gratz, which is funding a graduate student in Wang’s lab. “This is an exciting new trend that we hope to see grow in the years ahead,” Vernescu says.

The WPI strategic plan sums up its goals for the research enterprise this way: “building on the university’s current and historical strengths and seizing emerging opportunities in some of the most currently important multidisciplinary areas.” With the achievements of FY 2018, both the numbers and the efforts that underlie them, that vision seems well on the way toward being realized.

Highlights from a Record Year

Here’s a look at where some of WPI’s funding came from in FY 2018 (amounts for some awards include anticipated future increments):