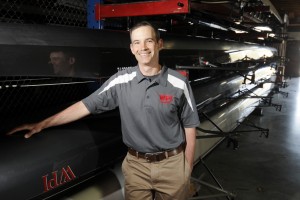 When crew coach Jason Steele arrived at WPI in 1999, his task was much like that of the students he’d be coaching: Build something.

Steele came to coach a team that was just transitioning from a club program at an institution where the general population of women had been too small to support a full-fledged athletic program. In these past 14 years, though, the number of women students has risen from less than 20 percent to about 32 percent.

“And we’re the beneficiaries,” he says.

The team has often been small for a rowing team: 19 or 20 students, sometimes as few as 14 or 15. But the program has benefitted from increased interest, with more than 30 students in each of the last three years.

That also means the team he’s putting on the water now is a mature one, with more upperclassmen than previously.

It isn’t just the numbers, however; Steele says rowing is one of those sports that presents a rare opportunity for the incoming student to participate in a sport they’ve never tried – and often end up competing at the national level.

“They try it and, lo and behold, they fall in love with it,” he says.

Compare that with sports like basketball where, if a student hasn’t been playing for many years at the high school level and developed skills and experience, they’re unlikely even to make the team.

Rowing, Steele says, “provides the pure athletic experience. A good athlete can figure it out.”

Figuring it out, however, doesn’t make a championship team; experience does.

“This year, our top boats are were filled with juniors and seniors,” he says. “We have had more experience than ever before.”

“Like any program, we’ve had our ups and downs,” he says. But this year is definitely the former; as they head into the championships this weekend and next, Steele is optimistic: all his team has to do is what they’ve been doing all season, and beat those they’ve beat before.

It sounds simple enough, but behind that simple mission is a stunning accomplishment: in 22 years, WPI had never won an event at the NEWMAC Conference Championship: on April 21, in just 10 minutes, they won two (placing first in the Second Varsity 8 and the Third Varsity 8 ) and finished second in the Florence Smith Cup standings.

It was a month of accomplishments for Steele and the rowing program: four days later, Steele was named NEWMAC Women’s Rowing Coach of the Year.

For Steele, getting the best out of these athletes has involved learning and keeping in mind what the WPI student is like.

“There are certain challenges that come with these students,” he says.

Understanding the academic stresses of their seven-week terms and their projects is all part of managing this team.

Steele applauds WPI’s commitment to the program, the support of alumni and the program’s three volunteer coaches, and the blessing of a new athletic facility that contains the Donahue Rowing Room, a distinctive advantage for a Division III school.

Watch WPI’s women’s rowing team compete in the ECAC Championship May 12, both at Lake Quinsigamond.

WPI racked up 65.46 points Saturday at the New England Rowing Championships on Lake Quinsiagmond en route to a fifth place overall showing.  The Engineers saw its Varsity 8 capture the petite final for the second straight season while the Third Varsity 8 won a bronze medal and the Second Varsity 8 and Novice 4 boats both reached their respective grand finals.