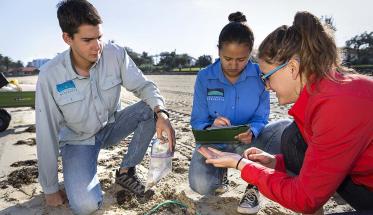 At WPI, the message is clear: If you see a problem in the world, tap into your knowledge and the power of teamwork to help find a solution. A recent collaboration solved an internal challenge of matching students with project centers around the globe—and highlighted the effectiveness of the WPI approach in the process.

Project-based learning is a signature of the WPI Plan. When WPI students apply classroom knowledge and work in teams to address real-world problems, they not only make improvements to communities around the globe but also experience invaluable personal growth through the process. It’s why every junior at WPI completes an Interactive Qualifying Project (IQP), which can be done on campus or at one of WPI’s more than 50 project centers locally, domestically, or internationally.

In 2016, with a growing number of project centers as well as applicants to be placed, WPI found itself with a problem of its own to solve. As part of the IQP application process, students were numerically ranking their center choices. With a manual, paper-based system involving the review of roughly 700 student applications, and individual project center directors across sites responsible for interviewing applicants, the process of placing students had become increasingly complex and time-consuming.

At the same time, the Global Projects for All initiative included in WPI's Strategic Plan was set to bring even more students to centers around the world. With this new growth, the placement process would only become more overburdened, with students potentially matching at centers of low interest to them.

“Over the last few years, we’d have 50–100 students on a waiting list at the end of the selection process. Students are eager to start, and they want to plan. They’d get frustrated,” says Anne Ogilvie, executive director of the Global Projects Program.

Andy Trapp, associate professor in the Foisie Business School, had spoken with Ogilvie in the summer of 2016 about the possibility of working on this project together. Around the same time, Trapp was advising a group of then-senior industrial engineering majors working on their Major Qualifying Project (MQP): Camila Dias ’17, Lin Jiang ’17, and Elizabeth Karpinski ’17. The team, which had recently placed an impressive second in a global simulation competition, was interested in this new challenge: helping develop an algorithm to address the matching issue for IQP centers.

Under Trapp’s leadership and in collaboration with Ogilvie and Deborah Fusaro, program coordinator in the Interdisciplinary and Global Studies Division (IGSD), the team developed an algorithm to help inform student placement embedded in a “decision support tool.” 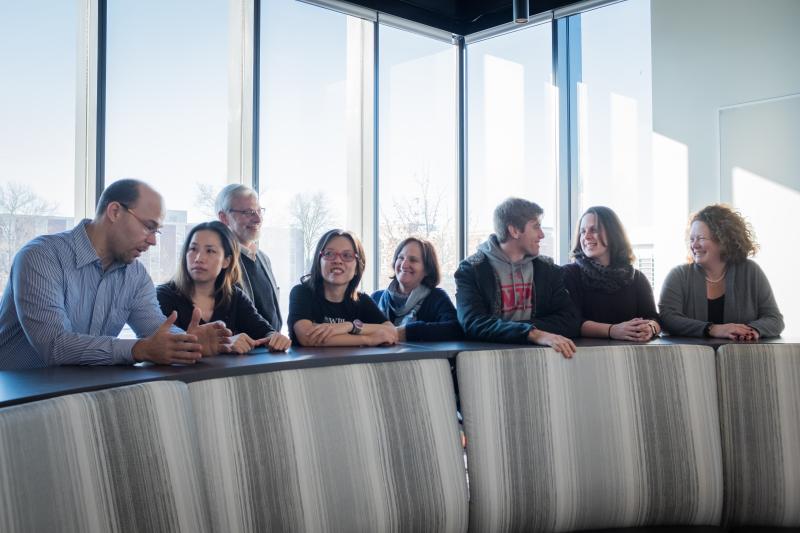 “The algorithm combines input from both students and project center directors to evaluate the mutual compatibility, and then uses optimal matching techniques to create the match outcomes,” explains Trapp.

“We knew students were interested in, and could do well at, more than one project center,” Ogilvie says.

With an algorithm developed, it was time to test. A small “proof of concept” prototype saw a 17 percent increase in the number of students matched with their preferred choices. In recognition of their work, Dias, Jiang, and Karpinski earned the 2017 Provost’s MQP Award for best MQP in the Foisie Business School.

With Dias, Jiang and Karpinski having graduated, and Trapp on sabbatical leave, Foisie Business School associate professor Adrienne Hall-Phillips worked with Trapp to recruit business school graduate students Xin Liu ’18 and Xuechun Li ’18 to conduct a full-scale pilot test. They successfully matched 97 percent of more than 900 students with a project center in which they were “very interested.”

“It was amazing to see this work so quickly. It’s a very WPI solution to a WPI problem.” --Anne Ogilvie, executive director of the Global Projects Program.

Significant contributions were also made by data science PhD student Pitchaya Wiratchotisatian and visiting instructor Hoda Atef Yekta, who together conducted simulations to test hypothetical scenarios and ensure the tool would work properly.

This year the algorithm was fully launched as a key part of a larger group of changes implemented to streamline the application process for students. Changes included putting information sessions online, eliminating interviews, moving up the timeline for decisions, and employing the WPI-built eProjects 2.0, which students will use for the entirety of their project work. Alfred Scott ’15, now a systems developer on the WPI web app development team, led the integration of the matching tool with the new eProjects 2.0 system. Erin Bell, assistant director of the Global Projects Program, worked with the eProjects team to implement the new application process.

The result? One hundred percent of this year's juniors who were qualified to do off-campus projects were placed at centers they ranked “very interested,” with no wait listing.

Ogilvie says this is the first year with no wait list. “It was amazing to see this work so quickly,” she notes. “It’s a very WPI solution to a WPI problem.” 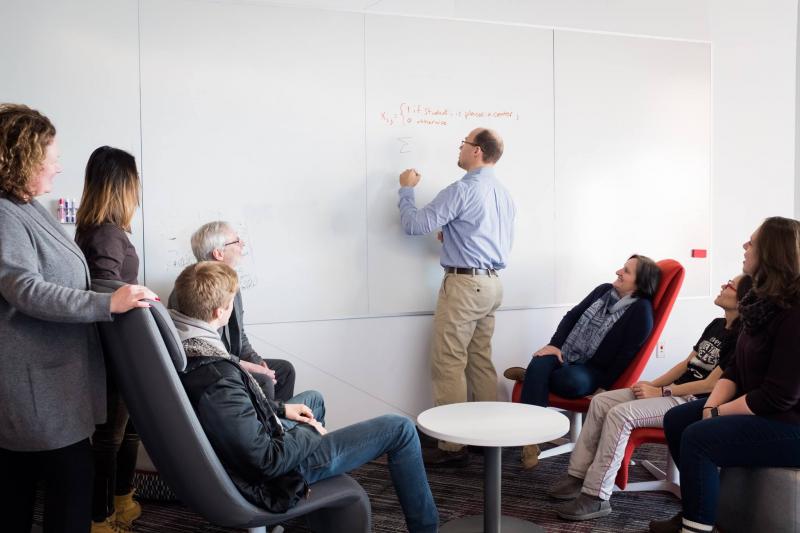 “The algorithm combines input from both students and project center directors to evaluate the mutual compatibility, and then uses optimal matching techniques to create the match outcomes,” explains Andy Trapp (at board).

The benefits are multifold—with gains for program directors, administrators, and students.

“An additional benefit is that our staff did not spend time in January responding to disappointed students and parents,” says Kent Rissmiller, dean of Interdisciplinary and Global Studies. “When a student tells us he or she came to WPI to participate in this program, our response should not be, “We don’t have room for you in the program.”

People Involved in the Process

Directors still have major roles in the process, reviewing student applications and recommending placements. “It’s an algorithmic matching tool, but it’s important to point out there are humans involved in every part of the process,” Ogilvie says.

Trapp, whose expertise recently earned him a National Science Foundation grant to develop a placement tool that assists with refugee resettlement, explains: “When designing matching systems that involve people, it's critical to ensure that generated match outcomes are recommendations, and complete discretion is given to decision-makers—in this case, IGSD—for any fine-tuning.”

There was some initial resistance, Rissmiller says, but directors realized that the old process of interviews and multiple decision points was becoming unworkable. “On seeing the results this year, I think nearly everyone thinks that we reached better outcomes for students.”

“The ability to simulate different placement scenarios lets us test our offerings and adjust our capacity before the final decisions are announced,” Rissmiller says. “In that way, we can run the program at higher capacity and less cost per student. With lower cost, we can serve more students and achieve Global Projects for All.”

The program has grown in multiple ways, adding terms to high demand sites such as London and Copenhagen, and creating 19 new or expanded centers, with an additional six centers offering pilot terms for next year. The added capacity has helped increase the success of the matching algorithm by providing more options for students; in the past, 59–69 percent of students were placed in a top-choice center, and there was always a waitlist.

“The new approach gets students thinking beyond a single ‘top choice,’” says Rick Vaz, former dean of Interdisciplinary and Global Studies and current director of the Center for Project-Based Learning. “More students are being placed in programs they’re interested in, which is the bottom line.”