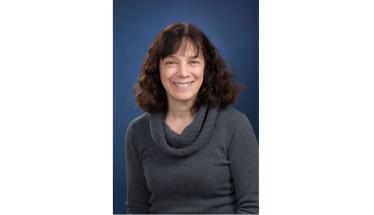 Suzanne Scarlata, Richard Whitcomb Professor of Chemistry and Biochemistry, was honored for her leadership in the biophysics community and for developing new analytical techniques for the study of signaling proteins.

Suzanne Scarlata, Richard Whitcomb Professor of Chemistry and Biochemistry at Worcester Polytechnic Institute (WPI), has been elected a fellow of the American Association for the Advancement of Science (AAAS), the world's largest general scientific society.

Election as a fellow, an honor bestowed upon AAAS members by their peers since 1874, recognizes scientifically or socially distinguished efforts to advance science or its applications. Scarlata, along with this year's 488 other new fellows, will be recognized in the AAAS News & Notes section of the Nov. 27 issue of Science. She is being honored for her leadership in the biophysics community and for developing fluorescence methods to probe the dynamics of signaling proteins in vivo and in vitro.

Scarlata, who joined the university faculty in 2016, studies how small molecules in the bloodstream can change the behavior of cells. In particular, she is interested in how certain hormones and neurotransmitters can activate a family of organic molecules known as G proteins (guanine nucleotide-binding proteins), which are involved in transmitting signals from various stimuli from the exterior to the interior of cells.

G proteins help control how cells move, divide, and change structure; the signaling pathways they mediate are integral to a wide array of biological functions, including sensory perception, the regulation of the heart, nervous system, and reproduction, and the development of cancer. "Most current pharmaceuticals work through G proteins," Scarlata said.

Among her current research projects is a study of how G proteins can stimulate phospholipase Cβ, an enzyme that raises the level of calcium in cells. “This pathway is one of the main ways that allows cells to respond to many hormones and neurotransmitters to increase cellular calcium levels, which allows cells to move, divide, or die, depending on the specific circumstances,” she told an interviewer for the Biophysical Society in 2016, the year she served as the society’s president.

Since coming to WPI, Scarlata and her team have found a surprising new mechanism through which G proteins directly change the level and types of specific proteins in cells. “This mechanism is very basic to almost all cell types and may underlie processes as diverse as changes in heart muscle with exercise and the formation of neurodegenerative plaques in the brain,” she said.

Scarlata has received more than $10 million for her research from the National Institutes of Health, the American Heart Association, the Keck Foundation, the U.S. Department of Education, and other organizations. In addition, she has been the keynote speaker at several national and international meetings.

Before joining WPI, Scarlata was professor of physiology and biophysics at Stony Brook University, where she had taught since 1991. She previously served as assistant professor in the Department of Medicine at Cornell University Medical College and as a member of the technical staff at AT&T Bell Laboratories, where she developed optical testing methods for printed circuit boards. She received a BA in chemistry from Temple University and a PhD in physical chemistry from the University of Illinois, Urbana-Champaign.

She is associate editor of the Journal of Bioenergetics and Biomembranes and serves on the editorial boards of the Journal of Fluorescence and the Journal of Membrane Biology. She has also served on the editorial boards of Analytical Biochemistry, BBA Biomembranes, F1000, Journal of Biological Chemistry and Analytical Biochemistry, and Methods and Application of Fluorescence Spectroscopy. From 2001 to 2004, she was an American Heart Association Established Investigator. She was elected president of the Biophysical Society in 2015 and served during the 2016 calendar year.