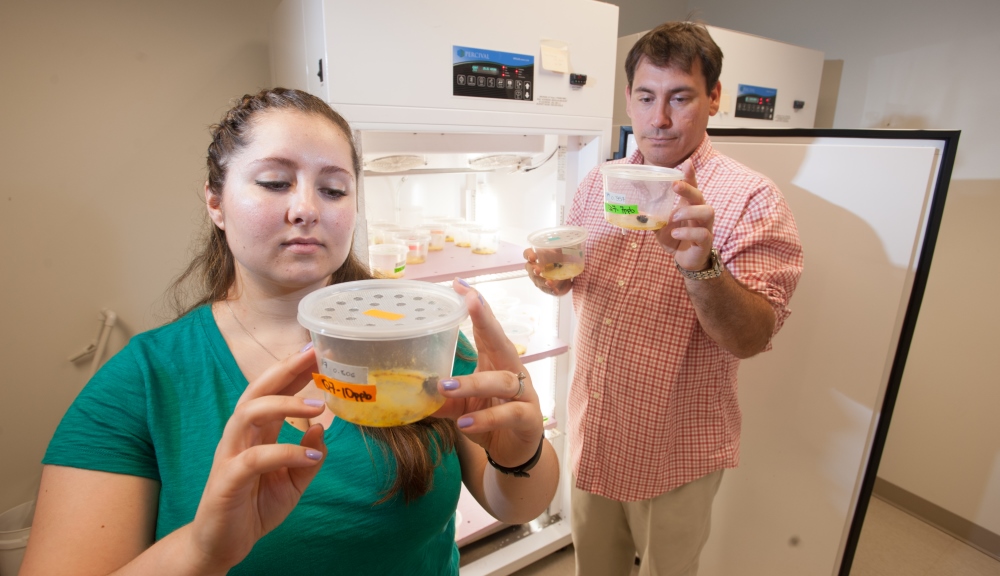 Researchers at Worcester Polytechnic Institute show that queens and males are greatly affected by regular exposure to a low dose of a widely used pesticide, threatening the long-term stability and survival of bee populations.

Adding to growing evidence that pesticide use may be contributing to the decline of many bumblebee species across North America, a new study reveals that daily consumption of even small doses of a widely used class of insecticides known as neonicotinoids reduces the survival of queen and male bees, which are critical to the survival of wild populations. The study also found that exposure to the chemicals alters the expression of genes regulating biological functions such as locomotion, reproduction, immunity, and learning and memory, suggesting that neonicotinoids may be having a greater negative impact on the viability of wild bumblebee populations than previously thought.

The study (“One size does not fit all: Caste and sex differences in the response of bumblebees (Bombus impatiens) to chronic oral neonicotinoid exposure”), by Robert J. Gegear, assistant professor of biology and biotechnology at Worcester Polytechnic Institute (WPI), and Melissa Mobley '17 (PhD) (who worked on the research as a PhD candidate), was published in the open-access journal PLOS ONE. It is the first study to examine how oral exposure to field-realistic doses of neonicotinoids differentially affects queen, male, and worker bees at the individual level. Since each type of bee makes a separate, but vital, contribution to the stability of wild populations, understanding how each responds to neonicotinoids can help establish agricultural practices and regulations that can better protect native bees and other pollinators and preserve the critical role they play in maintaining ecosystem function and biodiversity, Gegear said.

“There are approximately 4,000 bee species native to North America,” he noted, “and many are in rapid decline. For example two of the 10 bumblebee species that were historically present in Massachusetts are now gone and a few more are headed in the same direction. As our bumblebees and other native pollinators disappear, so too will our native flowering plants and the animals that use them for food, shelter, and nesting sites.

“We need to understand all the factors that are contributing to the decline of wild bees, but the evidence is mounting against neonicotinoids in agricultural and urban areas. Because neonicotinoids are readily translocated from the soil to the nectar and pollen of wildflowers growing in these areas and can persist in the environment for long periods of time, they pose a potential hazard to wild bumblebees at every stage of their annual life cycle.”

Gegear said that previous studies of the effects of neonicotinoids on bumblebees have overwhelmingly focused on how they affect the day-to-day success of the colony. “Focusing on the colony stage makes sense when you are concerned about crop pollination,” he said, “but does not provide a comprehensive view of neonicotinoid effects within an ecological context because it ignores other life stages that have a direct impact on the dynamics of wild populations.”

For example, he said, focusing on the colony places the emphasis on the survival of worker bees, which account for the majority of the population at the colony stage. But important life cycle stages occur beyond the colony and involve only the queen and the males, which are responsible for mating, overwintering, and establishing new colonies in the spring. For this reason, Gegear and Mobley chose to use individual-based assays to measure and compare the chronic oral toxicity effects of field-realistic doses of neonicotinoids among queens, males, and workers.

They found that while exposure to the insecticide reduced the survival of queens and males over a seven-day period (with a larger fraction of males succumbing than queens), it had virtually no effect on the survival of workers at comparable doses. Gegear said that workers may have a greater ability to detoxify the chemical than males and queens. In fact, since the workers produce the honey that feeds the other bees, their ability to detoxify pesticides may shield the queens and males from exposure while they are in the hive. However, when the males and the queens leave the colony at the end of the cycle, they need to find food to prepare for mating and overwintering, and therefore can be directly exposed to the pesticide while visiting contaminated wildflowers.

To better understand how neonicotinoids affect bumblebees at the molecular level, Gegear and Mobley then fed workers and males sub-lethal doses of clothianidin and used RNA sequencing to determine how the chemical affected the expression of genes thought to be involved in detoxification and other major biological processes. They found that even at ultra-low doses, neonicotinoids can have profound effects on genes regulating important physiological and behavioral processes in bumblebees, a finding consistent with a growing body of studies at the organismal level.

Gegear says the study findings show, for the first time, that exposure to neonicotinoid pesticides at normal environmental levels has the potential to negatively impact wild bumblebees at every life stage, thus accelerating population decline. “Not only do neonicotinoids have the potential to reduce the number of queens establishing nests at the beginning of the cycle and the number of males and queens available to mate at the end of the cycle, our work shows that they also have the potential to reduce the ability of males to produce sperm, the ability of queens to acquire floral resources, and the ability of queens and males to fight off infection, all of which can compromise population stability.”

He said the study also emphasizes the importance of expanding research on the impact of pesticides on bumblebees to include the effects of field-realistic exposures on all types of bees and at all stages of the life cycle. “For example,” he said, “most regulatory decisions on neonicotinoids are based on acute toxicity levels in managed honeybee workers. We’ve shown that this approach misses critical impacts that can significantly affect the survival of wild bees, and by extension, the long-term viability of many natural ecosystems.”

Learn more about Rob Gegear's work to conserve bee diversity and how you can make your backyard more bee friendly.