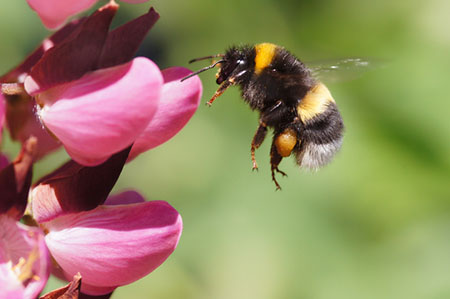 Show some respect for the lowly bumblebee. It’s much smarter than you think.

As a child, Professor Rob Gegear was stung trying to rescue a bumblebee from a spider web. Despite that painful encounter, he’s made it his life’s work to understand the minds of bees. He gets his share of jokes from friends who can’t believe he gets paid to watch bees all day. But once they realize that one out of every three bites of food we take depends on the work of bees, butterflies, and other pollinators, they see the importance of his research.

Gegear became smitten with bees during his graduate work in animal behavior at the University of Western Ontario. As a lab assistant, he would mold plastic centrifuge tubes to mimic the shapes of flowers and place a sugary reward inside. In the wild, bumblebees are quick to figure out how get at deep reserves of nectar. They can navigate a floral maze or learn to press a lever-like structure that releases locked petals.

“We tried changing the tubes to trick the bees—but no matter what we did, the bees found the nectar,” recalls Gegear. “I was hooked.”

He’s also summoned local honeybees to his office with a dish of (odorless) sugar water. “Within 15 minutes of the scout bee detecting it, I’d have hundreds of bees at my desk. I had to close the window, there were so many bees coming in!” He marked some of the bees and noted that they would return to his window, day after day.

“A lot of what people think about insects—that they’re just little robots, functioning only by stimulus-response associations—is not the case at all. The vast majority of what a bee does is based on much more complex brain processes.”

In his lab in Gateway Park, Gegear analyzes how bees forage for nectar and pollen to feed their colony. He’s shown that they make complex decisions to get the best reward for their time and effort. Understanding how a bee’s brain works could teach us a lot about our own.

He’s also assessing threats to bee populations—such as disease and common pesticides—that could have a major impact on agriculture worldwide.

This summer, Gegear will work with Biology and Biotechnology Instructor Ally Hunter to turn a vacant lot on Hackfield Road into a Pollinators Garden for the WPI community. Classes, project teams, and participants in WPI’s K-12 summer programs will have a place to observe how bees, butterflies, and hummingbirds interact with the plant world.

“People tend to group all bumblebees together,” Gegear says. “However, there are over 20 species in Eastern North America alone, and they all have different sub-niches within the floral supermarket.”

To engage “citizen scientists” in monitoring bee populations, he’s put together a guide to the eastern bumblebees, which he hopes WPI talent can develop as a phone app. The app would make it simple for anyone to identify the species they encounter and transmit their counts to a central database at WPI.

“It’s going to take the community to help in this cause,” says Gegear. “With so much attention to bee decline, it’s a good time to get the public on board. When I talk about my work, they see beyond ‘Let’s kill that bee because it’s going to sting me!’ They become aware of its importance and understand that it’s responsible for one-third of what we eat.”