Working together to achieve “zero hunger”––or access to safe, healthy, and nutritious food for all––is the goal of World Food Day (October 16), a project of the Food and Agriculture Organization of the United Nations. At WPI, an Interactive Qualifying Project (IQP) team is taking that mandate to heart, looking at the issue of hunger on college campuses.

According to the Wisconsin Hope Lab, 33 percent of students at four-year universities are considered food insecure, highlighting the scope of a problem invisible to many people. At some schools, like Quinsigamond Community College, that number can reach 60 percent. 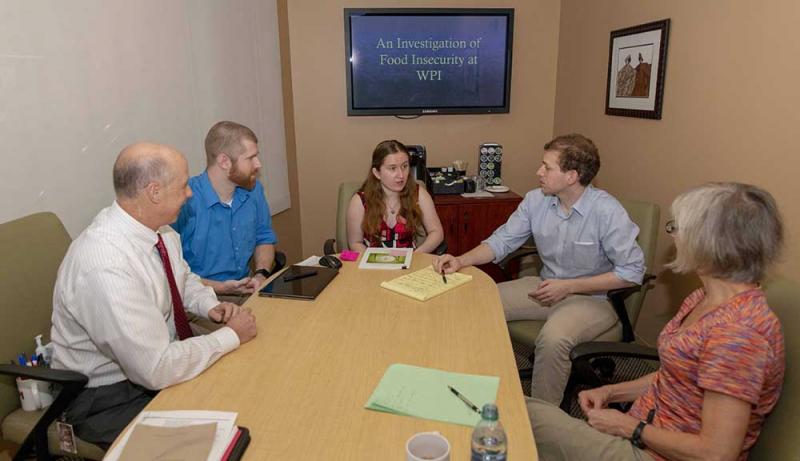 The team with their advisors during one of their weekly meetings.

There is a perception that if you can afford to go to college, you can afford food, says IQP team member Daniel Suitor, a fifth-year student majoring in management engineering. But student loans and scholarships may not cover all expenses, including meal plans or living stipends.  “No one wants to be the person asking for help, so most people don’t.”

Suitor and teammates—sophomore Maggie Gaffney, majoring in chemical engineering, and junior Christopher Renfro, majoring in aerospace engineering—wanted to know what degree of food insecurity exists on WPI’s campus, and on other campuses in the area, and what can be done.  Suitor, who recalls that he was affected by food insecurity his sophomore year, hopes that the team can develop some real, actionable outcomes around hunger on college campuses.

The project, which will span A, B, and C term this year, began with an examination of the core issue and a literature review. Next, the team will develop and distribute surveys and conduct additional research to identify whether and to what extent there is on-campus food insecurity; finally, the team will analyze their findings and present implementable solutions.

The passion Suitor, Gaffney, and Renfro have for this issue is reflected by students they speak with, says Gaffney.

“I knew that the IQP would be a lot of research, but I didn’t expect that many people to be so excited [to discuss it]," she says. “Food insecurity is not one of those topics people want to talk about, as it’s uncomfortable.”

Many schools do help ensure students are well nourished, for example, by requiring freshmen to live on campus and enroll in a full meal plan, or providing food distribution centers for students. Gaffney notes that Holy Cross has a food pantry open to any area college students, but it isn’t always convenient for WPI students, especially those without transportation.

“That’s where the WPI community comes in. It’s the solution the community will uphold after we’ve graduated.” -Maggie Gaffney

“Our research has shown that no matter the academic setting—commuters, residential students, two- or four-year colleges—students just don’t have food resources available to them,” Suitor says. The team, led by advisors Gregory Snoddy, dean of students, and Kristin Boudreau, department head, Humanities and Arts—designed and developed surveys, asking students about their food resources.

The trio meet three times a week—twice with each other and once with their advisors—over seven weeks, drafting 20 pages of research and citations. They expect to distribute the surveys (which can be answered anonymously) in the next phase of work as they examine hunger here at WPI and look at possible ways to alleviate it. Results will offer valuable demographics.

Suitor says that the group has become aware of ideas from other campuses and from stakeholders at WPI—like an on-campus app that alerts students to free food left over from conferences, for example. Investigating meal plans and how many are actually used after they are paid for is another focus. Wherever there is food waste in the system is of interest, he explains.

By developing some proposed solutions, the team hopes their work can go beyond the scope of a typical project report and make an impact on campus and, eventually, at campuses across the U.S. and beyond.

Suitor calls the group project the best co-working experience he’s ever had. “I think that’s what happens with a clear, defined goal we are all passionate about solving.”

Both he and Gaffney note the importance of sustainable solution or set of solutions.

“That’s where the WPI community comes in,” she says. “It’s the solution the community will uphold after we’ve graduated.”