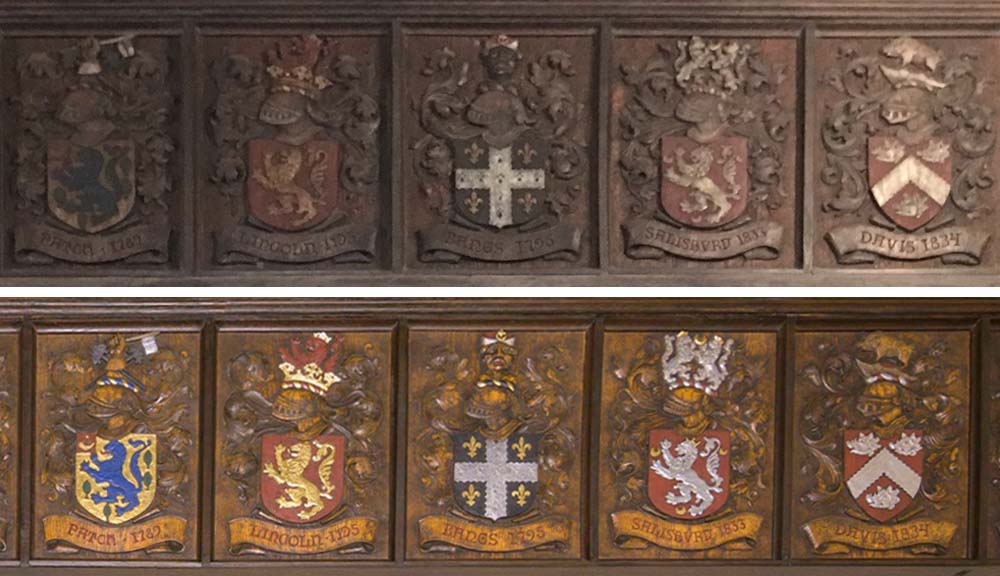 TLC for a Beloved WPI Landmark

If you have been over to Higgins House lately, you might have noticed the hustle and bustle of restoration specialists and the unmistakable gleam emanating from nearly every surface.

Higgins House, the Tudor-style mansion at the edge of campus, is in the middle of a restoration to bring back some of the earliest majesty of the circa 1921 house.

The restoration is being funded by a generous alumni donation, according to Peter Thomas, executive director of lifetime engagement. He explains that Michael Abrams ’77, a Texas-based member of WPI’s Alumni Association Board of Directors, found phoning in to board meetings challenging. With members calling in from all over the world and relying on the house’s old equipment, hearing speech clearly was difficult and the experience was not engaging.

Abrams suggested a donation to upgrade the equipment, and from there the idea, the donation, and the project blossomed into major restoration work.

“This gift is phenomenal,” says Thomas. “The donation was $500,000 and then he challenged the alumni board to raise another $140,000 for an Alumni Center and the second floor restoration work.”

Abrams is a valuable partner in the entire process, says Thomas. “He has been with us every step of the way,” he says.

The goal is to have the work complete for the alumni board meeting in April and for a grand opening in May.

The donation is the first that can be recalled that is designated especially for Higgins House; it has now piqued interest from other potential donors.

“This house has needed restoration and TLC,” says Gina Patterson, executive assistant with University Advancement. “The people who have used and know the house say this place is awesome.” That includes the various faculty and staff who have worked in the building or who have spent time strolling the gardens. It’s also the alumni who gather here or the handful of students who lived in the house in the 1970s. And it extends in a ripple effect when considering all the weddings, baby and bridal showers, and other celebrations taking place on its grounds.

Higgins House was donated to WPI in 1971, but its history dates to five decades before that time when the home was built by Aldus Chapin Higgins III ’93 (whose father, Milton Prince Higgins, was one of the founders of Norton Company and one of the first two faculty members at WPI) and his wife, Mary (“May”), in a partial replication of the Compton Wynyates Castle in Warwickshire, England. Members of the Higgins family lived in the home until May’s death. It’s listed on the National Register of Historic Places (added in 1980).

“This house is very grand, but it welcomes you,” says Cheri Hardiman, CEO of Old New England Restoration. “It’s a very special feeling walking in the door and it stays.” Bill Hardiman, the company’s president, agrees, noting that their task was to bring the house back to its original beauty, not to make it look new. “Everything in this building is like a work of art,” he says. “Part of our job was to do some research to see what was there.”

“Restoration is the theme,” says Thomas. “It’s to bring it back to when it was originally built. There is the tech piece in the library and everything else is to maintain the spirit and feel of the building as it was intended.”

The Higgins House library has a new A/V system, which includes a dual projector in the ceiling that displays callers as they speak. In addition to restoration of wood—from the floors and baseboards to decorative elements, work also includes creation of an alumni lounge area; new carpeting, lighting, and seating; WiFi, network, electric, and utility upgrades; cosmetic repairs; and signage repair.

One of the most startling changes is in the coats of arms series above the Great Hall. Each of the plaques represents a family that owned the land Higgins House sits on*. For years, if visitors were lucky enough to even notice they were there, they were almost never able to read the names on the plaques because of the century-old thick layer of grime covering them.

Thomas is thrilled with the result. “When Iris was doing the restoration work, you could smell the cigar smoke in the water from the cleaning,” he says. And you could also finally read the names on each plaque. The restoration is returning a sense of majesty to the house. Everyone admires it.

Past Owners of Higgins House Land

*Plaques represent property owners of the land and/or building: