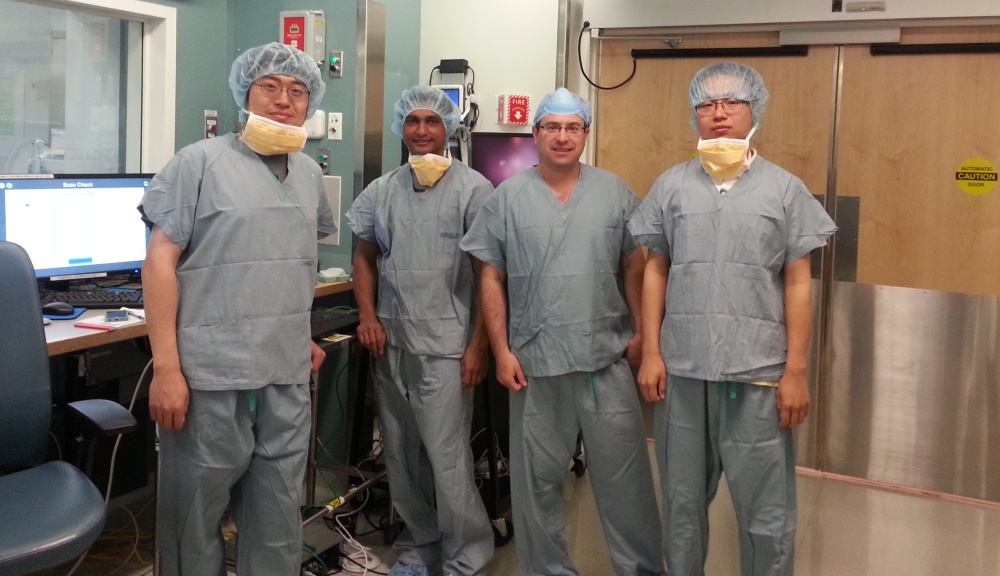 Gregory Fischer, second from right, with PhD candidates, from left, Weijian Shang, Nirav Patel, and Gang Li, at Brigham and Woman’s Hospital, where a surgical robotic system he developed for prostate biopsies was involved in a clinical trial

Fischer is a pioneer in medical, surgical, and assistive robotics whose innovations include MRI-compatible robotic systems designed to assist with diagnosing and treating cancer.

Gregory Fischer, PhD, William Smith Dean’s Professor of Mechanical Engineering and Robotics Engineering at Worcester Polytechnic Institute (WPI), has been elected a senior member of the National Academy of Inventors (NAI). Fischer is part of the inaugural group of 66 senior members, who represent 37 research universities and government and nonprofit research institutes.

Senior members are active faculty members, scientists, and administrators from NAI member institutions who have demonstrated success with patents, licensing, and commercialization. “They have produced technologies that have brought, or aspire to bring, real impact on the welfare of society,” the organization noted. “Senior members also foster a spirit of innovation within their communities through enhancing an inventive atmosphere at their institutions, while educating and mentoring the next generation of inventors.”

In his Automation and Interventional Medicine (AIM) Laboratory, Gregory Fischer is developing a new category of surgical robots designed to work inside MRI scanners. The robotic systems make it possible for surgeons to operate guided by real-time imaging. Learn how this novel technology is being used in two NIH-funded projects to detect and treat cancers.

Over the past decade, Fischer has received over $8 million in funding from the National Science Foundation (NSF) and the National Institutes of Health (NIH) to develop innovative image-guided surgical robotic systems designed to operate inside MRI (magnetic resonance imaging) scanners, along with shared hardware and software platforms for cooperative surgical robotics. He led a team of robotics engineers at WPI, in collaboration with colleagues at Johns Hopkins University, Brigham and Women's Hospital, and Acoustic MedSystems Inc., in developing a system to assists surgeons in conducting prostate cancer biopsies by precisely aligning the biopsy needle using real-time MRI imaging. The system has been involved in a clinical trial at Brigham and Women’s.

Development of another MRI-compatible robotic system, which will enable more effective treatment of metastatic brain tumors, was recently advanced through a $3.5 million award from the NIH National Cancer Institute. The award is shared by co-principal investigators Fischer and Julie G. Pilitsis, MD, PhD, chair of the Department of Neuroscience and Experimental Therapeutics and professor of neurosurgery at Albany Medical College. The system will use a robot to guide a needle-like probe into the brain to destroy tumors using high-intensity therapeutic ultrasound. The robot will align the probe under real-time guidance to destroy tumor tissue and leave healthy brain tissue unaffected. Acoustic MedSystems, which designed the probe, and GE Global Research Center, which will implement thermal imaging capabilities to monitor, in real time, the ablation of tumor tissue, are corporate partners. The goal of the five-year project is to deliver a system ready for clinical trials.

Other ongoing projects include simulation and augmented reality guidance for surgical robots, wearable assistive and rehabilitative robots for disabled persons (including an actuated glove for stroke rehabilitation and a lower-limb exoskeleton for lower body paralysis), and robotic devices for interacting with children who have pervasive developmental disorders such as autism. Fischer’s research has resulted in eight granted U.S. patents, a number of which have been licensed by AiM Medical Robotics, a start-up that will commercialize his innovations in medical and MRI-compatible robotics.

Fischer, who joined the WPI faculty in 2008, received BS degrees in mechanical engineering and electrical engineering from Rensselaer Polytechnic Institute and an MSE in electrical engineering and a PhD in mechanical engineering from Johns Hopkins University, where he received a Predoctoral Prostate Cancer Training Fellowship from the Congressionally Directed Medical Research Program. He also received a New Investigator Award for Congressionally Directed Medical Research Program and received training through a collaborative research arrangement between the NSF Engineering Research Center for Computer Integrated Surgery at Johns Hopkins and the National Alliance for Medical Image Computing (NA-MIC) Surgical Planning Laboratory at the Brigham and Women’s Hospital. He has more than 100 peer-reviewed publications, including over 20 journal manuscripts or book chapters in the field of healthcare robotics.

NAI senior members undergo a two-step selection process, including internal NAI review and consideration by an advisory committee. The committee comprises elected NAI members and other professionals considered pioneers in their respective fields. "The election of the inaugural class of NAI senior members is a significant designation for a group of prolific inventors from NAI member institutions who are collectively a driving force in American innovation," said NAI President Paul R. Sanberg. "This is truly an accomplishment worth celebrating."

NAI is a member organization comprising U.S. and international universities, and governmental and nonprofit research institutes, with over 4,000 individual inventor members and fellows spanning more than 250 institutions worldwide. It was founded in 2010 at the University of South Florida to recognize and encourage inventors with patents issued from the U.S. Patent and Trademark Office, enhance the visibility of academic technology and innovation, encourage the disclosure of intellectual property, educate and mentor innovative students, and translate the inventions of its members to benefit society. The NAI publishes the multidisciplinary journal, Technology & Innovation.  www.academyofinventors.org

WPI, a global leader in project-based learning, is a distinctive, top-tier technological university founded in 1865 on the principle that students learn most effectively by applying the theory learned in the classroom to the practice of solving real-world problems. Recognized by the National Academy of Engineering with the 2016 Bernard M. Gordon Prize for Innovation in Engineering and Technology Education, WPI’s pioneering project-based curriculum engages undergraduates in solving important scientific, technological, and societal problems throughout their education and at more than 50 project centers around the world. WPI offers more than 50 bachelor’s, master’s, and doctoral degree programs across 14 academic departments in science, engineering, technology, business, the social sciences, and the humanities and arts. Its faculty and students pursue groundbreaking research to meet ongoing challenges in health and biotechnology; robotics and the internet of things; advanced materials and manufacturing; cyber, data, and security systems; learning science; and more.  www.wpi.edu