The interview for this article was conducted over his cell phone, at night, from deep in the dark, hot, buggy woods of Kentucky.

That’s where U.S. Army Lt. Col. Justin B. Putnam, along with Master Sgt. Thomas Blair, senior military science instructor and ranking non-commissioned officer at WPI, and their team set up camp for the next few weeks — leading about 150 men and women from all over the country in Cadet Summer Training at Fort Knox. 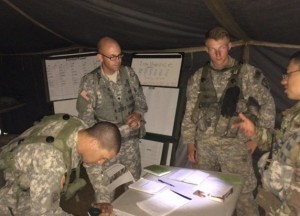 Cadets plan out a mission.

The U.S. Army Cadet Command oversees all 275 national ROTC programs; this is the biggest single Army training of the year. The main focus, Putnam said, is to get cadets ready to become Army officers after graduation.

By design, the 24-hour-a-day immersive environment does not include the comforts of the ROTC college program at WPI. Nor does it present the same level of risks.

“We’ve got bugs, ticks [he said they pick them off themselves every day], spiders … we’re kind of being watchful of those things, as well as poison ivy,” said Putnam, professor of military science and battalion commander, about the woods.

And don’t forget the 90-degree heat with humidity.

Putnam said cadets’ and leaders’ T-shirts are constantly soaked. After training days spent feeling the effects of the heat or dealing with snakes, nights are spent sleeping in the dirt. Wakeup time is 5 a.m.

When cadets first arrive, they are assessed in order to establish a baseline of training. Putnam said the range of training between ROTC programs from the various states varies greatly.

“Everyone focuses on different things. Some cadets may or may not be experienced with time in the field before. Some are more comfortable. Some lead cadets have prior experience,” said Putnam.

But then, before they venture outside, there is something from which cadets have to gradually wean themselves.

“Out in this environment, cadets can’t have distractions, so no cell phones, which can be a challenge,” said Putnam. During training time when cadets first arrive, they get 30 minutes of phone time at the end of every day. When it’s time to head into the wilderness, though, they have to turn in their phones until training is complete, Putnam said. 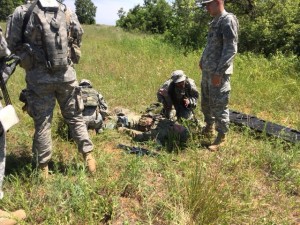 However, the time cadets lose texting or online is replaced with personal bonding amid challenging survival conditions and realistic missions in rural Kentucky.

The simulated role-play training, said Putnam, consists of cadet groups and leaders going out into the woods with limited supplies, establishing a relationship with local villagers, ascertaining who the enemy is, defeating them, and securing the area. Cadets are tasked with finding ways to accomplish their missions by thinking creatively and working as teams. In some scenarios, Putnam said, there is a conflict with casualties: someone gets shot by the enemy, and cadets have to protect that teammate without losing anyone else, get that person medical help and safely exit the situation.

“Out here … Blair … controls the enemy and the environment the cadets work against,” said Putnam, providing almost constant coordination to ensure the scenario is as believable and effective as possible. Though Blair just arrived at WPI in February, he has proved invaluable out in the field, said Putnam.

Other team members: WPI ROTC Supply Technician Sharon Parry and Darryl Gill, scholarship and enrollment officer, are both at Fort Knox on laundry and liaison functions. Sgt. First Class Travis Blanchard, a WPI assistant professor of military science, is with the 2nd Regiment going out; and Major Francisco J. Escobar is expected soon at training.

In between eating MREs and watching for ticks though, Putnam is keeping in touch with folks back in Worcester.

“For university employees who are cadre, I still reach back and use them. We are actively working at WPI while we are here,” said Putnam, in addition to training activities, sometimes putting in 18-hour days. He and Blair and the others will travel back to Massachusetts around the beginning of July.