Selected from pool of 300, they are among 60 who will talk with members of Congress about their research

As a kid who did extra math homework problems for fun, Natalie Wellen ’17 knew majoring in math was her likely path when she went to college. What she didn’t know was how much mathematics could intersect with her other interests and involve her in research that is both personally satisfying and endlessly fascinating to her.

This week, Wellen and Huilin Yang ’17, a chemical engineering major, will represent WPI at the Council on Undergraduate Research’s (CUR) 21st annual Posters on the Hill event in Washington, D.C. The event takes place today and tomorrow (April 25–26). 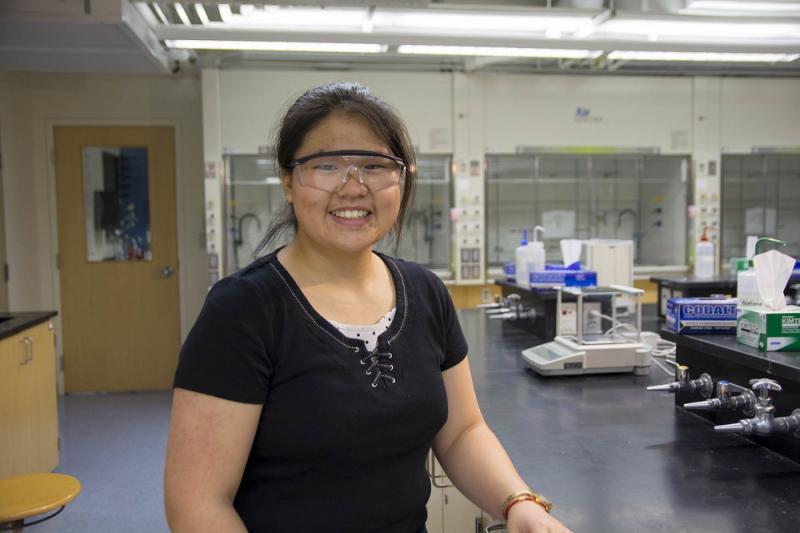 Huilin Yang in the lab.

Wellen’s work, “Modeling Over the Counter Derivative Trading with and without Central Clearing Parties,” and Yang’s research project, “Inkjet-Printed Drug-Releasing Polyelectrolyte Multilayers for Wound Dressings,” were two of just 60 entries selected from a pool of 300 for this competition, which involves meeting with U.S. senators and members of the House of Representatives and giving a poster presentation. Wellen, who will also represent her home state of Oregon, uses mathematics and mathematical modeling to understand the effects of regulations in financial markets and public policy. Yang’s research focuses on the chemical properties and structures of polymers and how they can be applied in various, primarily medical, industries.

With each academic year, Wellen’s math journey has become more focused and has given her opportunities to experience all the complexities of the mathematics discipline. She spent time during her junior year on a Research Experience for Undergraduates (REU) and did her IQP teaching pre-calculus to students in Worcester’s Doherty High School. She has attended conferences and now works as a Peer Learning Assistant in the Mathematical Sciences Department.

Yang has worked with Professor Amy Peterson since her freshman year, developing lab skills, publishing work, and performing research into polymers to focus on what she says is a hot topic in research. “People can do all kinds of applications,” Yang says. Using special polymers that can be dissolved in water and even stacking polymers ("like lasagna,” Yang says) opens the door to many uses.

Like Yang’s experience, when Wellen was able to connect her fascination with public policy with her love of mathematics at WPI, her projects began to take shape. At a Joint Mathematics Meetings, she was intrigued by a talk about high-frequency trading. The topic had connections to her now-advisor Professor Stephan Sturm’s proposed research around using math in public policy. Last summer she asked Sturm if she could work on his research, which involved using math to look at government regulations and how to prevent financial institutions from going bankrupt when one institution goes under. “It’s called stability in the system,” explains Wellen, and has formed the basis of the research she will present in D.C.

Sponsored by CUR, Posters on the Hill is an annual event that celebrates undergraduate research in all disciplines and is a leading opportunity for members of the U.S. Congress to understand why undergraduate research is vital to the overall research community. Founded in 1978 by a group of chemists who wanted to spotlight important research at liberal arts colleges, CUR supports high-quality research that involves collaboration between faculty and students.

“Applications are reviewed based on the uniqueness and significance of the research, technical merit, if the research is of broader interest to those outside the discipline, and the presentation capabilities of the student,” says a spokesperson for CUR’s national office. 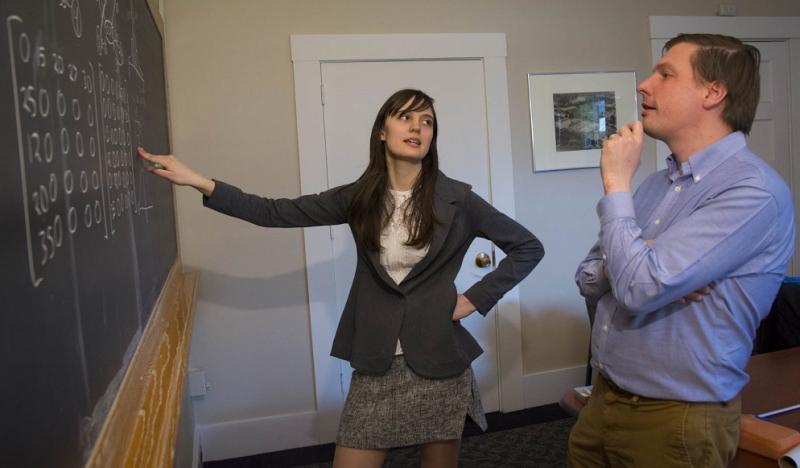 Students have one-on-one meetings with members of the U.S. Congress and then present their own research with a poster. Wellen and Yang will schedule several meetings to discuss their own research and to advocate for research funding at the undergraduate level.

Yang, though slightly intimidated by talking with senators, says she is compelled to tell them how much the funding means to her and to her research. “I want to show them my research is really interesting,” she says. “And as a WPI student, my school has given me the resources to do this. There are many students at WPI doing really fascinating work, and I am only one of many.”

Sturm says he is proud of Wellen’s achievement, in part because it gives her external confirmation that her work is advanced and high-quality, and drives home an excellent point. “In the political climate we are now in, no one has an idea how regulation will change—if there will be less or not,” he says. Either way, Wellen’s work into financial markets, regulation, and stability can help prove an essential point—a final outcome’s interpretation shouldn’t be based on a gut feeling or a political assumption. “Sound decision making needs a careful analysis,” Sturm says. “Scientific research is necessary.”

According to CUR's national office, Posters on the Hill provides a unique and accessible way for government decision makers to understand the value of investments in research and education. “For our members it is exciting to see the various projects and dedication of each student team," says a CUR representative, "and for the students it is a wonderful opportunity to be recognized and to network while in the nation’s capital.”

“I want to show them [the senators] my research is really interesting. And as a WPI student, my school has given me the resources to do this. There are many students at WPI doing really fascinating work, and I am only one of many.” -Huilin Yang

For her part, Wellen didn’t realize how compelling this branch of mathematics is. “I have always thought government and public policy were very interesting,” she says, “but I have always liked math more.” The Joint Mathematics Meetings really targeted her interests. “Essentially, I knew this is what I want to do with my life,” she says. “I figured combining math and public policy was possible, but I didn’t know how.”

Yang’s work also developed as she gained more experience. “My research is about forming polyelectrolytes multilayers, which have the potential application for wound healing,” she says. “I used an inkjet printer to prepare the multilayers on cotton paper. This is a novel, cheap, and easy process of forming the structure. I tested the surface properties of the multilayers and studied the release profile of the antibiotic gentamicin from them. I also tested the antibiotic property of the structure and proved that the multilayers loaded with gentamicin has contact killing effects on E. coli bacteria.”

Last summer, Wellen’s preliminary research work related to mathematical modeling with Sturm was funded by her selection as a Clare Boothe Luce scholar. That research, in turn, prepared her for her MQP and her Posters on the Hill opportunity. Using Python and a small amount of fairly vague data, Wellen’s task was to figure out in aggregate how much banks would be at risk in potential contract situations. “I really like making the models,” she says. “You can start with a small amount of data and then are able to make predictions overall and see how it all ties together.”

Wellen plans to take a gap year to work as an analyst at EverQuote in Cambridge before thinking about graduate school and her career. The thought of joining a think tank is especially appealing. “I want to make math models to study public policy and influence the laws of our country,” she says.

Yang, who is currently deciding where to do her graduate study, also just received an honorable mention recognition from the prestigious National Science Foundation’s Graduate Research Fellowship Program, and credits Peterson with excellent guidance and says the ability to work in a lab and do research that can have such widespread applications is thrilling. “I am really excited about it,” she says. “It’s really exciting to see all the work be a benefit for everyone in society. That gives me incentive to work hard in the lab.”