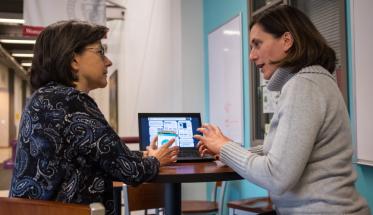 Put the Cookie Down! WPI and UConn Researchers Create an App to Predict and Intervene in Users’ Overeating

Researchers at Worcester Polytechnic Institute (WPI) and the University of Connecticut (UConn) are collaborating on a smartphone app aimed at helping users manage their overeating challenges in three key ways: by tracking eating patterns, providing interventions, and helping change behavior. The app—and its distinctive methodology—showed tremendous promise in an early pilot study.

A paper on the research was recently presented at the annual symposium for the American Medical Informatics Association, a nonprofit organization that focuses on the development of information technology to benefit healthcare. The WPI/UConn research report noted that a user study of 16 participants, all over the age of 18, overweight, and not necessarily trying to lose weight, showed positive results. At the end of the month-long pilot, nine of the participants lost an average of five pounds, three weighed the same, and four gained an average of two pounds. 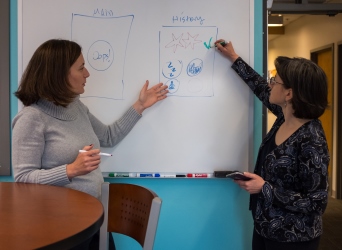 At the whiteboard, Tulu and Ruiz explore
enhancements to the SlipBuddy app, which
could be ready for release as early as 2019.

professor of allied health sciences at the University of Connecticut and director of UConn’s Center for mHealth and Social Media.

The research team’s three-pronged approach is an important differentiator in a crowded marketplace. According to a 2017 report in the International Journal of Obesity, there are nearly 29,000 weight-related apps on the market, with most focused only on tracking physical activity, calories, and body weight. The drawback with most weight-loss apps is that they are burdensome to use and don’t focus on actually trying to change the user’s behavior.

The WPI/UConn app, dubbed SlipBuddy, is built to do just that. In addition to tracking stress and eating, it’s a personalized intervention system built through the integration of behavioral strategies and technologies like mobile devices, machine learning, and text mining. The work is aimed at helping users identify what triggers them to overeat and inserting new stimuli that, instead, trigger healthy behaviors.

The app’s name, SlipBuddy, recognizes that it’s easy to “slip up” when trying to change unhealthy behaviors. Its reminders help users keep accountable to a “buddy” that suggests better behaviors in a nonjudgmental way.

SlipBuddy is designed to keep user interaction simple. Users are asked to check in three times a day to note their stress levels, fatigue, and hours of sleep, and whenever they feel they’ve overaten. Over time, as the app collects information (which is stored as anonymized data on a WPI server), the system uses machine learning to find patterns that can be used to predict when the user is likely to overeat. The app uncovers user-specific triggers, like late-night eating, watching TV, or sleepless nights. When the app predicts that the likelihood of overeating is high, it suggests interventions—for example, taking a walk, turning off the TV, or engaging in other activities that can help users reduce stress without resorting to eating.

Obesity affects health and mortality rates worldwide. According to the World Health Organization (WHO), at least 2.8 million people die each year as a result of being overweight or obese. And the problem is getting worse. The number of obese people worldwide has nearly tripled since 1975. Obesity-related health conditions include some of the leading causes of preventable death, such as heart disease, stroke, type 2 diabetes, and certain types of cancer. The global rate of obesity is highest in the Americas, the WHO noted, with 62 percent of the population overweight and 26 percent obese.

“I’m very hopeful that what we’re doing will make a big difference,” said Tulu. “Most weightloss apps are all about tracking something—tracking your calories, tracking your blood glucose, tracking your steps. This goes beyond that. We’re using machine learning to make this about intervention.”

The researchers are currently working on enhancing the app’s graphical user interface, integrating more intervention tools into the system, and fine-tuning the machine learning algorithms. A larger user study is expected later in 2018.

“It’s not an easy thing to build,” said Tulu. “Most weight-loss apps are developed by technologists, with not enough input from clinical psychologists or psychiatrists. The task is not trivial. We’re working out how to integrate clinical tools into our app. It’s an open question we’re trying to find answers to.”

In addition to work by the three principal investigators, the app has been the focus of two undergraduate Major Qualifying Projects and two National Science Foundation–funded Research Experience for Undergraduate summer programs.

“This is truly an interdisciplinary project that pushes the boundaries in obesity research,” said Ruiz. “The use of machine learning algorithms to uncover accurate predictive patterns of behavior allows our app to deliver user-centric, evidence-based, personalized approaches to prevent overeating, which will have a positive impact on combating obesity.”

The app was built for the Android platform, but eventually will be available for iOS devices, as well. While it is still in the research phase, the researchers say the app could be ready for release as early as 2019.