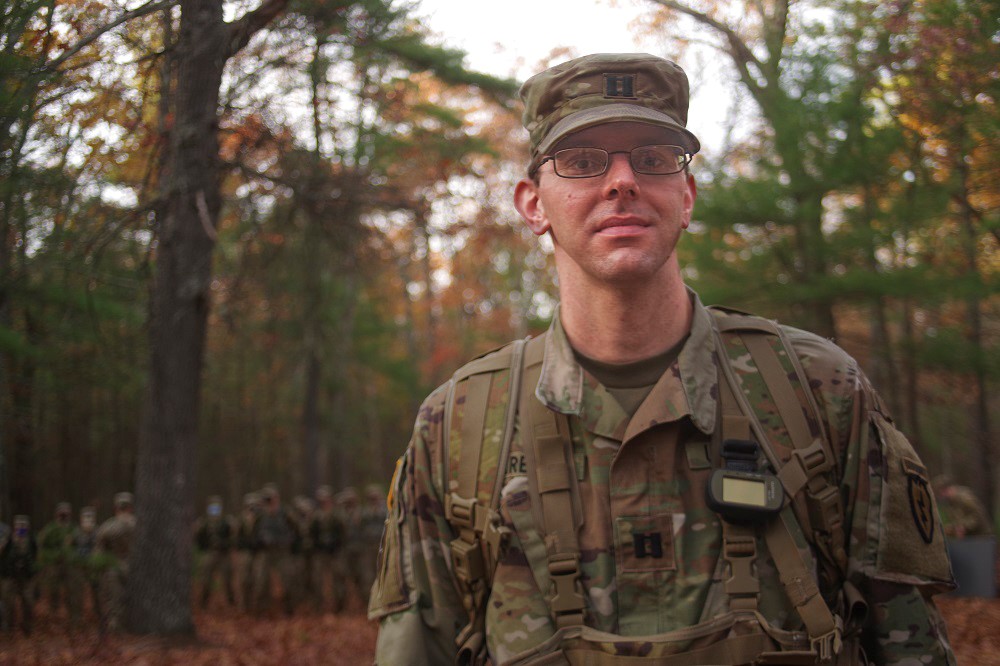 U.S. Army Capt. Stanley Kareta is on a coveted assignment, taking time at WPI to earn a master’s degree in manufacturing engineering while serving as an active duty officer.

The Palmer, Mass., native plans to use the skills and knowledge base he acquires with his future assignments with the U.S. Army Corps of Engineers as a manager or project engineer. The Army Corps’ responsibilities range from disaster relief and border infrastructure improvement to construction and maintenance of dams and levees.

Capt. Kareta also spends one day a month with the university’s Army ROTC Bay State Battalion as an advisor during the battalion’s field training at Fort Devens.

Commissioned as second lieutenant upon graduating from Norwich

Upon earning a bachelor’s degree in mechanical engineering from Norwich University in 2011, the ROTC cadet was commissioned as a second lieutenant in the active Army and reported to Fort Leonard Wood in Missouri, where he took an engineer basic officer leadership course. Following further training he remained at that installation for his first duty assignment, where he worked with an advance individual training company, doing support for engineer divers, interior electricians, and technical engineers. He later went to the engineer regiments premier Sapper Leader Course.

It has been great to have Stan on our team this year. His background and experience as an Army Engineer Officer is extremely relevant to many of our Cadets who are considering that career path.
Lt. Col. Adam Heppe, department head, Military Science

Kareta was later a platoon leader and executive officer for the 509th Clearance Co. and trained to clear supply routes of improvised explosive devices (IEDs) in case he were to be deployed to Afghanistan.

After his stint as executive officer, he was deployed to Iraq in support of Operation Inherent Resolve in 2015, after ISIS (Islamic State of Iraq) took over the northern city of Mosul, the country’s second-largest city. His job with the 1st Infantry Division was engineer operations officer, primarily helping establish engineer-specific training for Iraqis.

“As a senior first lieutenant, I met with senior Iraqi leaders so they could learn some of the skills they would need to take back Mosul,” he said.

Once back in the U.S., he went back to Fort Leonard Wood for a captain’s career course, which included a night class program with the Missouri University of Science and Technology that counted toward graduate-level credits. Upon completion of that course he took two eight-week semesters and completed his engineering management master’s program.

“I chose that because it was most applicable to the Army,’ he said. “It made sense on the practical side.”

From there he went to Schofield Barracks in Hawaii, where he was a member of the 25th Infantry Division, serving in three positions in four years. Those duties included working with the 3rd Brigade Combat Team commander on priority projects and in the 29th Brigade Engineer Battalion, where he managed the battalion budget and supply requests for the unit.

During his last post in Hawaii, Kareta took command of the Headquarters and Headquarters Company (HHC) of the 29th Brigade Engineer Battalion for 16 months, ensuring personnel readiness was up-to-date for battalion staff, including a medical platoon and Chemical, Biological, Radiological, and Nuclear (CBRN) response unit.

When the opportunity to apply for a highly competitive Advanced Civil Schooling program, Kareta sought to go to WPI. “The engineer branch usually gets 19 slots a year, and when I applied they had only eight slots in that window,” he said.

“It is a competitive process. It has to go to Human Resource Command, which looks at the application. … Manufacturing Engineering appealed to me because it has a mix of materials science, manufacturing engineering, operations and industrial engineering, and systems engineering. I like it because it doesn’t pigeonhole you into one category.

“I’m taking some MBA courses and can apply some of that knowledge, also some technical stuff you don’t normally do in the Army.”

While in graduate school, the Army requires Advanced Civil Schooling officers to reach out to an ROTC program or local recruiting station in which to work one day a month. Recalling his experiences with the ROTC program at Norwich, Kareta reached out to Bay State Battalion commander Lt. Col. Adam Heppe.

“The intent is to interact with cadets and give them a different perspective, provide mentorship, recent technical and tactical input, and provide access to Army personnel who tell the Army story,” he said.

“It made the most sense to go to Devens once a month when they do their training labs,” he said. “I’m a secondary instructor and provide feedback. WPI has a lot of cadets interested in becoming engineers, and Lt. Col. Heppe doesn’t have an engineer on his team.

“I can give professional advice in addition to sharing tactical and leadership skills," he said. "Cadets get to interact with other officers and those who are the future of the Army.”

Heppe said Kareta has been a welcome addition to the ROTC program. “His background and experience as an Army Engineer Officer is extremely relevant to many of our cadets who are considering that career path,” he said. “Additionally, his assignment to WPI as a graduate student demonstrates to our cadets the Army’s commitment to lifelong learning and professional development.”