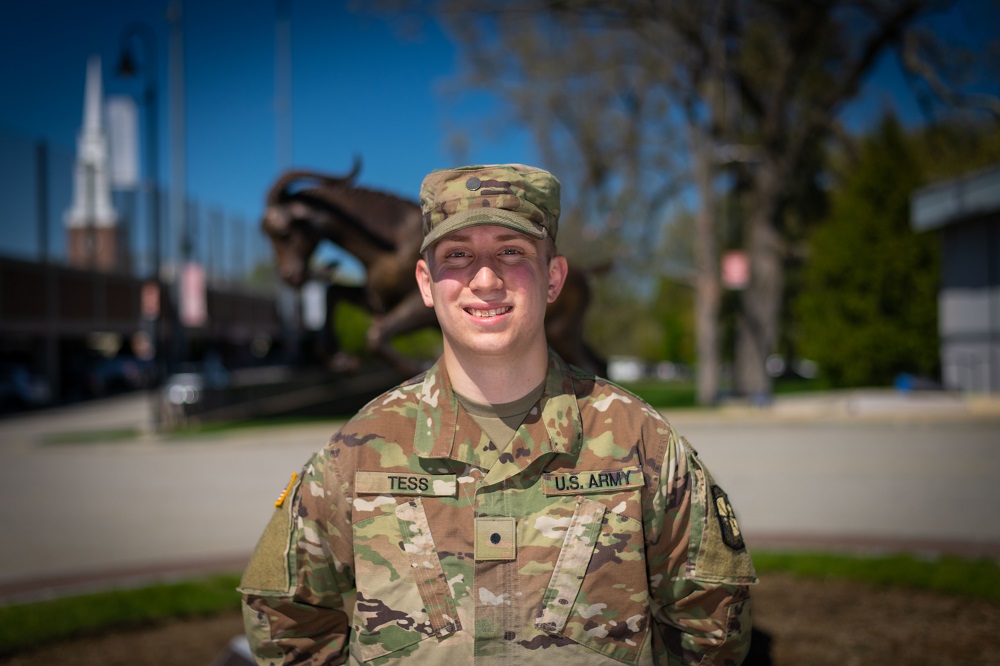 This past summer, WPI mechanical engineering student and ROTC Cadet Spencer Tess ’21 opted for an internship over a traditional summer break. With his scheduled ROTC stint at Fort Knox cancelled due to the pandemic, he decided to pursue an internship with the Department of Defense.

To prove the method, the team worked on a product that utilized aluminum alloy pellets that react with water to create hydrogen, which is then converted into electricity via a fuel cell. Using the VEPR tool suite resulted in three generations of minimum viable products (MVPs) and proof of concept. The technology could be used to generate electricity providing “on-demand” power for soldiers in the field or as emergency power in areas where it has been interrupted.

This work is especially important as it helps to solve a frequent problem faced by federal research labs—demonstrating the value and early product potential of new discoveries. Now, using VEPR, government scientists and engineers can more easily reveal the practical viability of a new technology.

Tess’s academic career at WPI culminated in winning the Technology Transfer Innovation Award for the Soldier Nanogalvanic Alloy Power (SNAP) at the FLC National Meeting held virtually on April 8. The Federal Laboratory Consortium for Technology Transfer (FLC) is a nationwide network of federal laboratories that provides a forum to develop strategies and opportunities to facilitate the transfer of laboratory technologies into commercial products.

Tess attributes his success to his many mentors at WPI and the Natick Labs, hard work, and ROTC, which has helped him develop as a leader and to work as part of a team. “I am a better critical thinker as a result of my cadet experiences and the substantial time commitment requires discipline and organization," he says, "which, along with the many other lessons I learned, has made me a more well-rounded person.”

Because of the pandemic, he worked remotely from his home in Littleton, Mass., giving him a glimpse of an 8-hour work day in front of a computer. He saw his role on the team as engineering and ideation manager, which he describes as discover, develop, deliver. “The MVP process fit perfectly into the length of a summer internship allowing me to experience the process from start to finish,” he says.

The ROTC program is led by West Point graduate Lt. Col. Adam Heppe, professor and head of Military Science, and leader of the WPI’s ROTC Bay State Battalion. Drawing from about 100 students in the Worcester Consortium as well as UMass Lowell and Fitchburg State University, the mission of the battalion is to develop leaders of character to commission as officers in the Army.

“Spencer surprised and impressed everyone with what he accomplished during this internship,” Heppe says. “His ability to relate his understanding of military operations at a very high level and connect it to engineering science and technology was outstanding.”

Heppe credits the Career Development Center and the Center for Innovative Manufacturing Solutions with helping to develop a partnership with the Natick Labs, who employ many WPI alumni and whose military deputy director is a former WPI ROTC cadet.

The End Marks a New Beginning

For Tess, Friday, May 21, was both the conclusion of his undergraduate studies and the beginning of his career as a military officer. On that day, he graduated from WPI with a degree in mechanical engineering and was commissioned as a second lieutenant in the U.S. Army.

His next stop will be the engineer branch’s Basic Officer Leadership Course at Fort Leonard Wood, Missouri, where he will spend six months learning the intricacies of leading a combat engineer platoon before beginning his first duty assignment.

As for his experience, Tess is grateful for the opportunity. “I hope that two things happen—that the Army will get more funding to pursue this technology and take it to the next level and that it will help to open the door for more internships with the Department of Defense.”

Read about the awards.