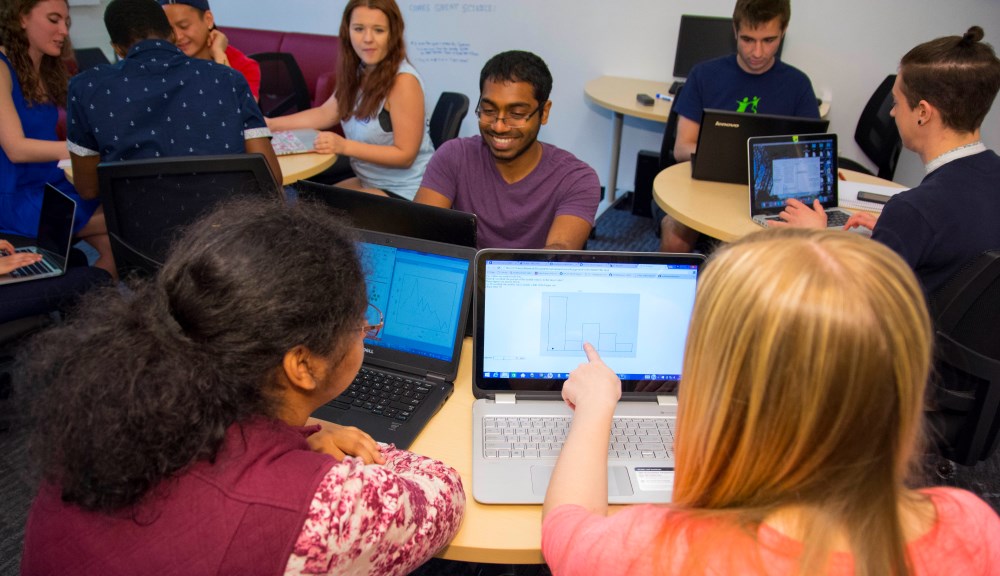 The $895,000 award through the Graduate Assistance in Areas of National Need program will provide fellowships for computer science PhD students

In an effort to build the nation’s strength in artificial intelligence research and teaching, the U.S. Department of Education has awarded Worcester Polytechnic Institute (WPI) $895,500 through its Graduate Assistance in Areas of National Need (GAANN) program. With the funds, WPI will provide six needs-based fellowships to U.S. citizens pursuing a PhD in fields deemed to be “areas of national need,” specifically artificial intelligence in such areas as deep learning, natural language processing, machine learning, healthcare analytics, data science, and learning sciences. To be eligible, candidates must plan to pursue a career in teaching or research.

The next decade will see an increased need for computer science professionals, according to data from the U.S. Bureau of Labor Statistics. Out of the top 10 STEM occupations with the highest number of jobs, seven are computer related. From 2014 to 2024, employment in computer occupations is expected to increase by 12.5 percent and result in nearly half a million new jobs, much greater than in any other STEM group.

About 2,000 PhDs graduated in computer science in 2017, according to the Computing Research Association Taulbee Survey; many pursue lucrative industry jobs or leave the United States, leaving a critical shortage of talent. Only one-third of these graduates stay in the country to work in academia, the survey noted, limiting the nation’s ability to educate enough computer scientists to meet current and future workforce needs.

The GAANN program will be directed by Elke Rundensteiner, professor of computer science and founding director of WPI’s Data Science program. “Computing and, in particular, artificial intelligence have transformed all aspects of work and life,” Rundensteiner said. “To help the nation remain globally competitive, WPI will mentor the future generation of computer science professors and professional leaders who will, in turn, drive artificial intelligence innovations, as well as train much needed computer professionals in these key areas.”

GAANN fellows will be trained in both pedagogy and practical aspects of teaching and encouraged to present research at national and international conferences, as well as publish work in reputable journals. Each fellow will have two mentors who, along with Rundensteiner, will work to connect them with colleagues in academic, industry, and government settings. They will also have the opportunity to participate in artificial intelligence research projects currently taking place at WPI. Combined, Rundensteiner and colleague Neil Heffernan, professor of computer science and director of WPI’s PhD program in learning sciences and technologies, oversee $5 million of funded research related to artificial intelligence.

“AI is an exciting area that is broadly applicable in critical areas of innovation,” said Heffernan, whose work focuses on using AI and deep learning to build smarter educational software to improvestudent learning. Heffernan will serve as chair of the GAANN Program Committee.

WPI has previously received GAANN awards in computer science, biomedical engineering, and physics. Past GAANN fellows have gone on to work at prestigious industry research labs for Google,Amazon, and Facebook and for universities including the University of California, Berkeley and WPI. Korinn Ostrow, who received her PhD in learning sciences and technologies in May, currently works at WPI as a research scientist in computer science and an adjunct professor in the Department of Social Science and Policy Studies. Her research focuses on K-12 student motivation and engagement within adaptive online learning.

Thomas Hartvigsen, a PhD student in data science, is a current GAANN fellow who works on machine learning strategies adaptively trading off the earliness of a prediction after seeing only part of a time series with the prediction accuracy by pairing recurrent neural deep networks with reinforcement learning. “Without the GAANN fellowship I would not have had the financial means to get my PhD with the aim to become a college professor,” Hartvigsen said. “GAANN has allowed me to become part of the academic community and contribute to the next generation of computer scientists.”

More information about the GAANN application process can be found at https://www.wpi.edu/academics/departments/data-science/funding. Prospective students can learn more here about a graduate information session on Nov. 10.