For Frederick Bianchi, the virtual orchestra is history 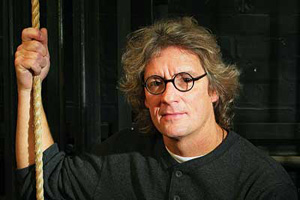 That’s not to say that his pioneering system to simulate acoustic orchestras in theatrical performances has seen its day. Indeed, the live performance technology has been and continues to be used in tens of thousands of performances around the world, from Annie to Les Miserables to The Wizard of Oz.

But you could say that Bianchi’s baby has grown up and left the nest.

“The novelty of it may not be what it was 15 years ago,” says Bianchi, director of computer music research.

Bianchi was director of electronic music at the University of Cincinnati when he and a colleague hit on virtual orchestra – out of necessity. In the late 1980s, they were working on a score for a television opera, only to learn that two live shows were part of the project. They scrambled to come up with a way to have simulated orchestra music interact with human performance on the stage. In the process, their live performance technology was born.

That technology is taken for granted now, but Bianchi faced a number of challenges in its infancy. Computer speed and memory, the size of the simulator, and its cost were all factors.

“We were taking incredible risks to say we can do this,” Bianchi says. “If things don’t work out, you’re talking about theatres that have a thousand people in them and they’ve all paid $150 a ticket. This added a particularly risky layer to the whole thing.”

Looking back, Bianchi sees that he was in the right place at the right time to develop the virtual orchestra.

He played brass instruments and piano, and had been composing music since he was 12 or 13. In college, he became interested in synthesizers and began looking for new approaches to composition, including the use of electronics.

At Cincinnati, “I was there in a good situation, working with good people, when all this was happening,” Bianchi says. “And, of course, I had the idea of what to do with it.”

The development of the virtual orchestra came at a time of dwindling funding for the arts, when many theatrical performances, especially at the regional level, could no longer afford an orchestra with a dozen musicians.

“Here’s a solution if you can’t get all those instruments,” Bianchi said, a solution that still enabled the musician at the keyboard to adjust tempo and otherwise interact with what’s happening on stage, versus having performers follow a piece of music recorded in a studio.

As might be expected, the new technology ran into opposition from musicians and unions. But Bianchi points out that people involved in developing virtual orchestra were themselves accomplished musicians – he holds a doctorate in music – who understood the industry and saw their work as a technical solution to an economic problem. Plus, virtual orchestra does not have to replace every musician in the pit. It has the flexibility to work with some live players while simulating other instruments.

It’s so ubiquitous and realistic that often people in theatres don’t realize there is not a live orchestra. Bianchi says that was the case of a reviewer in Ohio who didn’t learn until the second act of a performance that he wasn’t listening to the Canton Symphony.

A lot of times nobody knows about it, which is the whole point.

While the virtual orchestra continues to be updated and refined – Bianchi is co-founder of a company in New York that produces a version called Sinfonia – he says it has reached a level where there isn’t a need to experiment. He’s branched out into other things, including gaming and a project with director of jazz studies Rich Falco and a researcher at Harvard Medical School to record the brain images of jazz musicians while they improvise.

“It’s almost like there’s some closure to the whole thing,” Bianchi says of the virtual orchestra, “that this experimental thing, which is incredibly risky, not to mention costly, has gotten to a place where it’s common practice.”