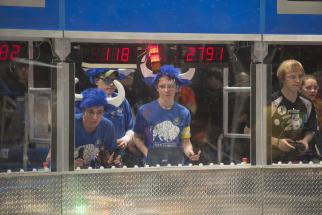 FIRST Robotics teams may have played in their last official competition of the year, but this weekend Worcester Polytechnic Institute (WPI) is opening its doors for another round of battles. On May 20-21, WPI will host BattleCry@WPI, an off-season FIRST Robotics Competition (FRC), giving teams one more time to showcase their robots. Sixty teams from New England and New York will compete in matches, enjoy a team social, and vie for a number of awards with some of the most elite robots in the game. Now in its 18th year, BattleCry@WPI has been touted as “the best off-season event in FIRST.”

“Off-season events like BattleCry@WPI give FIRST teams one more opportunity to compete with their robots, which they spent so many hours creating and improving. It also gives teams a chance to recruit new members or let existing ones try out new roles without the pressure of an official event,” said Colleen Shaver, associate director of the WPI Robotics Resource Center and event organizer. “BattleCry@WPI is one of the longest running off-season events in all of FIRST, as well as one of the largest, and WPI enjoys giving teams the chance to have one more go with their robots.”

The 2017 BattleCry@WPI game will be based on FIRST® STEAMWORKSSM, the 2017 FIRST Robotics Competition game theme. The competition invites two adventure clubs from an era in which technology relied on steam power to prepare their airships for the ultimate long distance race. Teams built their robots to meet the goals of the challenge.

The event is free and open to the public.