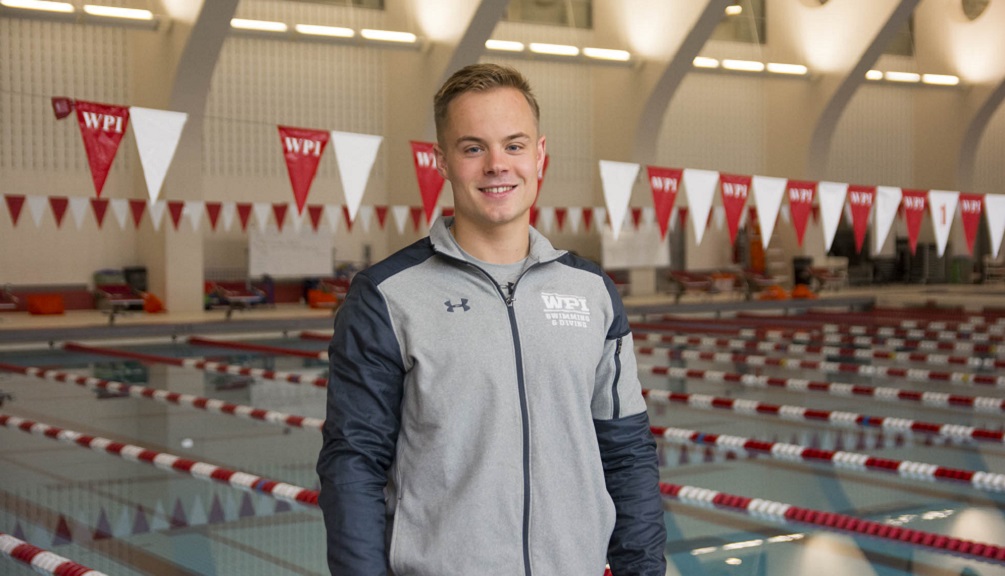 After graduating from high school in Sweden, Tim Petri ’17 wanted to continue swimming competitively. But to do so, he’d have to take the plunge and go to college in the U.S. After four years on the WPI swim team, Petri capped off his athletic and academic career this spring with a trip to the national championships and the NCAA Elite 90 Award, presented to the student-athlete with the highest cumulative grade-point average participating at the finals site for each of the NCAA’s 90 championships.

Petri’s achievement “speaks volumes of what hard work, dedication, and commitment to your personal goals and standards can achieve,” says Paul Bennett, WPI head men’s and women’s swimming and diving coach and aquatics director. “Tim arrived his first year here at WPI and improved tremendously enough to qualify for the NCAA Championships each of his last three years. In his final year he not only was finally selected to compete, but he earned one first team All-America award, and two honorable mention All-America recognitions.”

One of those awards was for the 200 metres breaststroke where he finished 11th in the country—he was 29th prior to the start of the meet, says Bennett.

According to the NCAA website, the Elite 90 is presented to the student-athlete with the highest cumulative grade-point average participating at the finals site for each of the NCAA’s 90 championships. Petri’s athletic accomplishments, along with his 4.0 GPA, landed him the award.

“I knew I was in the running for the award before going to nationals, but I didn’t expect to receive it. To me it was a huge bonus to being at nationals in the first place,” says Petri. Competing with his teammates and being recognized as a first team All-American and sixth in the country overall “was probably the most fun I’ve had at college. It was the perfect end to my college career,” he says.

Petri began swimming at age 4, competed in high school, and attended the Swedish national championships. He wanted to continue after graduation, but to do that in his home country, he would have had to go pro. So, he looked across the Atlantic.

“I searched for a Division III school where I could focus on swimming but not compromise on academics, and WPI was on the top of that list,” he says. After contacting the coach and learning more about the program, he decided WPI was a good fit.

“It was definitely what I wanted and a lot more. I didn’t have much idea of what college was like in the States. I was surprised at the sense of community at WPI. There’s a campus-wide vibe, and from the academic standpoint it’s been great, too,” says the computer science major.

Nevertheless, he was a bit overwhelmed at the beginning, especially studying in a non-native language. Balancing athletics with academics also challenged him, but he believes the discipline it took to do his best in both realms also helped him succeed.

“[My coaches and teammates] not only understand the sometimes demanding balance between work in the classroom and the pool, but they also push you to excel in both.” -Tim Petri

“Swimming gives me the kind of structure I need. You can’t procrastinate your studies, because you have to get everything done to get to practice on time. Especially around finals, you have extra work for academics, but you can’t compromise on practice. If you miss a few days, your swimming suffers,” he says.

Petri says the support of his coaches and teammates also helped him succeed. “They not only understand the sometimes demanding balance between work in the classroom and the pool, but they also push you to excel in both.”

With a job waiting for him at Google in September, he plans to take a little time off after graduation and go back to Sweden for a visit. He will also train for a swimrun half marathon.

Looking back, Petri says that his years swimming and studying at WPI have lived up to his expectations and then some.

“Going to the U.S. to study has really let me go for it. It’s helped me step out of my comfort zone as much as possible and let me live the life I wanted.”